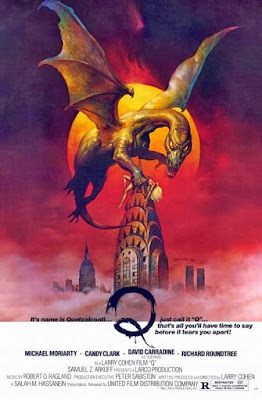 A.k.a. Q: The Winged Serpent. Larry Cohen's genre masterpiece about a city terrorized by a monster pigeon. Just kidding — about the monster pigeon, that is. In this prime slice of 1980s genre filmmaking, the terror of the New York City's skies is not some monster pigeon dropping birdshit on the Big Apple's denizens, but a huge carnivorous half-reptile and half-bird with a penchant for eating Big Applites. (No, despite the description, Q is not an early Donald Trump bio-flick.)
According to various online sources, including Trailers from Hell, the talented B-movie auteur Cohen (some of his better directorial efforts, all self-scripted, include Hell Up in Harlem [1973 / trailer], Black Caesar [1973 / trailer], It's Alive [1974 / trailer], the absolutely insane God Told Me To [1976 / trailer, with Richard Lynch], The Stuff [1985 / trailer], and The Ambulance [1990 / trailer]) rushed into producing this film after being unceremoniously fired from the far bigger budgeted (and far less successful) Mickey Spillane adaptation, I, the Jury (1982 / trailer). 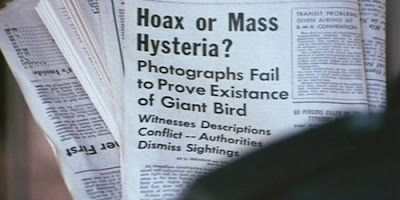 If that is truly so, genre film fans should be thankful that he got fired from that gig, 'cause Q is superlative cinematic cheese. It is a prime example of what low-budget genre filmmaking should be: in no way boring, tightly scripted, well acted, funny, fun, and with a dash of obligatory (and exploitive) nudity.* Q is like a masterfully layered, multi-level Betty Crocker movie-cake of not only all that, but also an extra topping some truly low-brow stop-motion animation and third-rate greenscreen technology. What's more: the monster lives in the best office building in the world, the Chrysler Building! This film is the bee's knees in spades. 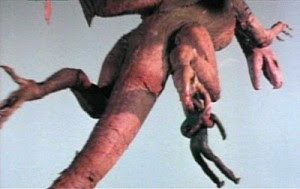 Interestingly enough, as obscure as the titular creature might be, Larry Cohen's movie is not the first to have been made featuring the Aztec deity Quetzlcoatl, the "Q" of the title. No, that honor goes to no one less than "Sherman Scott", otherwise known as  Sam Newfield (6 Dec 1899 – 10 Nov 1964), a mostly forgotten poverty row hack director considered one of the most prolific in American film history. Among the well over 250 projects Newfield directed by his retirement (including The Monster Maker [1944]), he also helmed the cheap and idiotic prior Quetzlcoatl flick, The Flying Serpent (1946) — the first and possible only other movie featuring the winged Aztec deity. (At least one online source claims the film inspired Cohen's film, but we have been unable to find irrefutable evidence of this.)

Q starts off with a bloody kick: the flirtations of a window washer (William Pilch) working high up on the Empire State Building are interrupted when he gets beheaded in front of the eyes of the secretary on the other side of the glass. Other mysterious deaths and disappearances follow, leaving Dt. Shepard (David Carradine [8 Dec 1936 – 3 June 2009] of Death Race 2000 [1975 / trailer], Evil Toons [1992 / trailer], Sundown: The Vampire in Retreat [1989 / trailer], Dead & Breakfast [2004 / trailer] and so much more) and Dt. Powell (Richard Roundtree of Shaft [1971 / trailer] and Maniac Cop [1988 / trailer]) tapping in the dark. At the same time, former junkie jailbird jazz musician Jimmy Quinn (Michael Moriarty of Pale Rider 1985 / trailer] and Troll [1976 / trailer]) participates in diamond store robbery that goes wrong, and while on the run finds out that the tip of the Chrysler Building houses the nest (and egg) of the flying monster. Needless to say, the paths of the three protagonists meet. 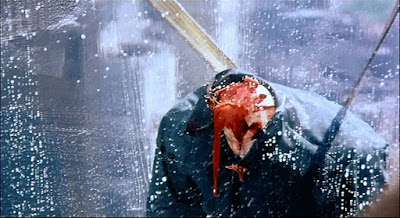 Wow. Such a tacky plot and then such a tight, fun film. Moriarty is excellent as the weaselly Quinn, and neither Roundtree nor Carradine are too shabby, either. Candy Clark (of The Blob [1988 / trailer] and Cherry Falls [2000 / trailer]), as Quinn's girlfriend Joan, is ultimately lost in the shuffle of the movie, her part both underdeveloped and relatively unimportant. Savior syndrome or not, her relationship with Quinn is as unbelievable as the size of her New York City apartment — even back when New York was cheap[er], no waitress could throw an apartment the size of hers. Her passing mention of past occurrences of Quinn hitting her underscores his general ass-wipe despicability, as does his childlike joy when Q rids him of two problematic mobsters on his tail and his general inability for compassion for others. The guy's a slimeball, and perhaps the biggest flaw of the film is that he survives until the final credits, but then, reality-based characterization is common to many Larry Cohen movies; he seems to know that being an asshole doesn't mean you'll do badly in the end. (Hell, in the world of today, being a lying sleazebag or asshole gets you a position in the White House, if not the position in the White House, not to mention on the Supreme Court.) 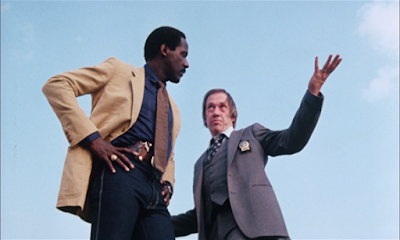 Rest assured that for all the humor since accrued by the dated special effects, Larry Cohen did not make Q as a straight-faced horror-fantasy movie: it is very much an intentional black comedy, and all the better for it. Time and again, he juxtaposes incongruent scenes and genial dialogue that can't help but instigate a laugh, especially since it is all played so straight. 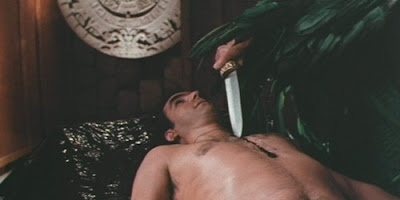 If you have never seen a Cohen flick, Q is a good place to start — and if you don't give a flying fuck about Cohen or his films but just want a fun flick or some prime 80s cinematic trash, Q is likewise a great genre film that guarantees 93 minutes of fun genre entertainment. Give it a go. 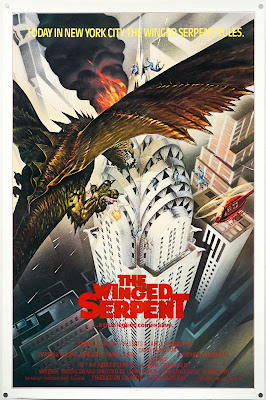 The fine poster above is by the US-American artist Bob Gleason, who is probably most famous for his work on the one sheet for John Carpenter's Halloween (1978 / trailer). The artist lives in Portland, Oregon, and has an official website that features galleries of the fine art paintings he now concentrates on but makes no mention of past work in painting film posters. He now paints, on commission, something known as "actual reproductions" of historic, "favorite master works" (not interesting) as well as cityscapes utilizing a palette straight out of a psilocybin trip (far more interesting).

Enjoyed the review. I am a huge fan of Cohen's cinema, and really wish they would release his 1987 film noir Deadly Illusion on DVD / Blu Ray. It is my favorite of his films. I own the original VHS release, which I transferred to DVD. Thanks for posting.