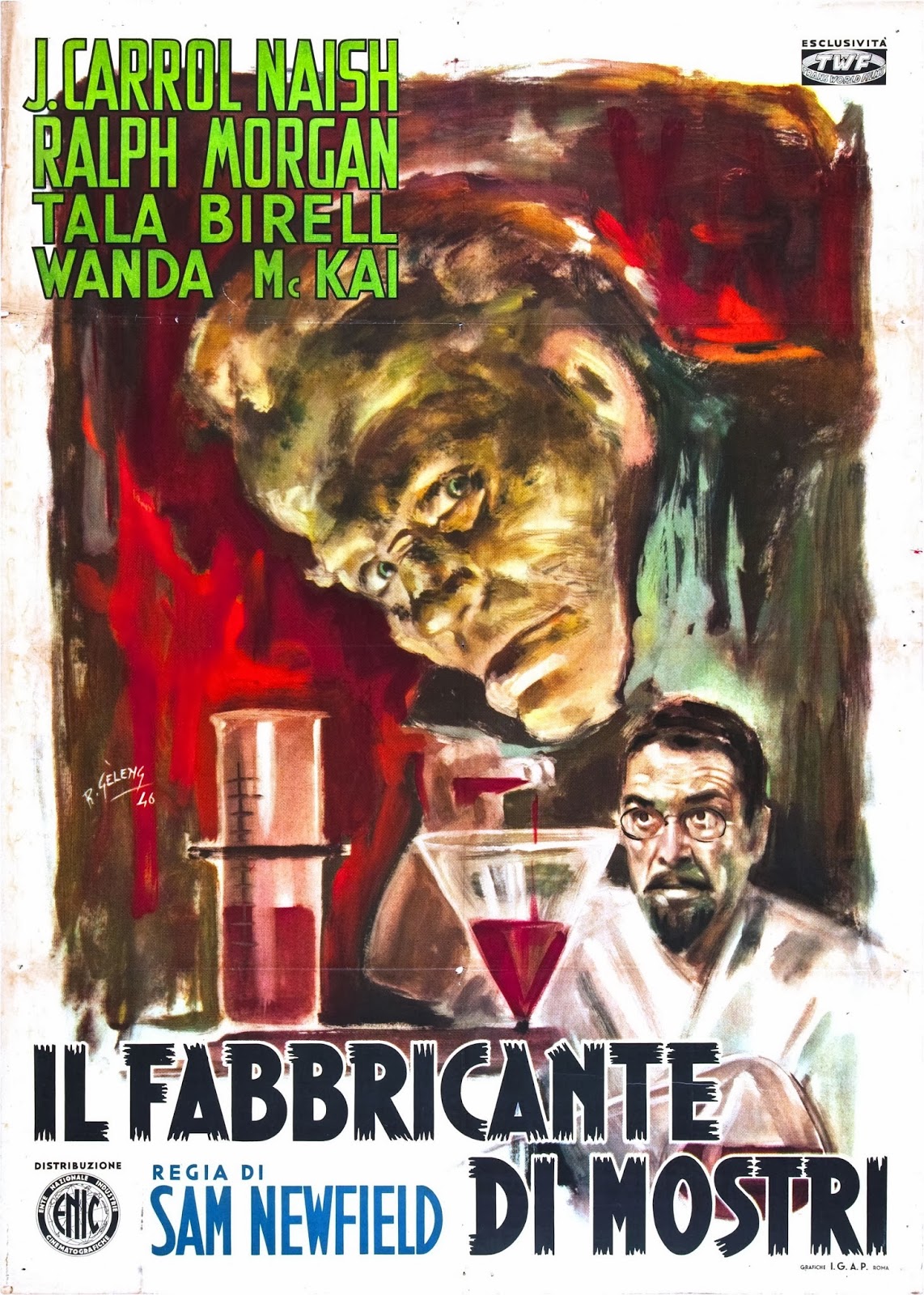 A Scene from The Monster Maker:

"Sam Newfield" (6 December 1899 — 10 November 1964) is hardly a name that rings a bell when talking about directors of years gone by, though one or two might remember him as the director of the Golden Turkey of Westerns, Terror in Tiny Town (1938 / full movie), famed for being the first, the last, and the only Western — if not movie — with a 98% midget cast. 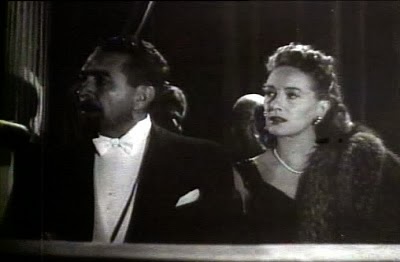 According to imdb, his nephew Sigmund Neufeld Jr. once revealed in an interview that his uncle, Sam Newfield (born "Samuel Neufeld"), was seriously addicted to gambling, which not only eventually led to the end of his marriage but also ensured that Newfield was eternally broke. With that in mind, it is hardly surprising that Newfield was perhaps the second most prolific director of the early sound era after William Beaudine. During Newfield's busiest period working on Poverty Row (usually at PRC Pictures, which was headed by his brother Sigmund Neufeld), he supposedly shot up to 20 quickies a year, often resorting to pseudonyms such as "Peter Stewart" and "Sherman Scott" (two names, along with "Sam Newfield", that Fred Olen Ray sometimes uses a pseudonyms in his own films) to hide his productivity from the public. In any event, the exact number of movies that Sam Newfield directed is, to this very day, not known. 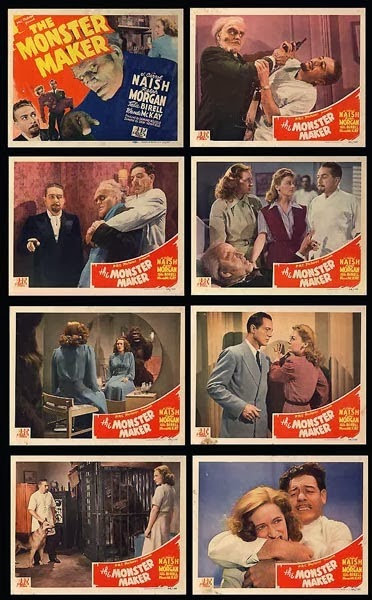 Neufeld's work, though at times not without historical importance, is across the board decidedly third and fourth rate — most of his notable films, for example, tend to be of the "bad film" genre: I Accuse My Parents (1944 / full movie), Wild Weed aka She Shoulda Said "No"! (1949 / trailer / full movie), Hitler — Beast of Berlin (1939 — with a young and unknown Alan Ladd) and, of course, Nabonga! (1944 / full movie). But to give some questionable credit where it is due, he did also direct the "race movie" and first "all-colored" musical western Harlem on the Prairie [1937], starring the unjustly under-known jazz singer Herb Jeffries. (Jeffries, once married to Tempest Storm, with whom he made his only directorial effort Mundo depravados [1967 / opening sequence / full movie], Jeffries turned 100 last Sept 24th and, at the time of this blog entry, is still alive in Wichita, Kansas.) 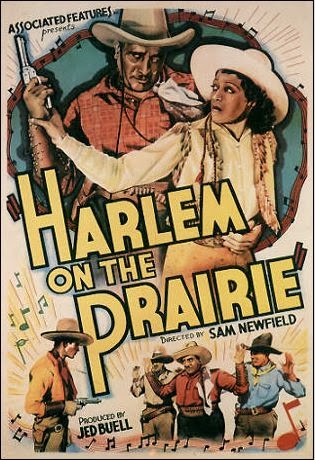 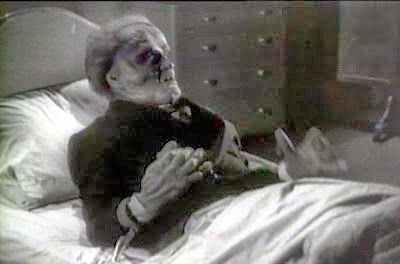 Unlike with William Beaudine, however, whom many assess as being unjustly christened "One-Shot", Newfield was indeed known to be a practicing one-shot director who never found a shot too messed up not to be used. During the making of The Monster Maker, one of the five known horror films Newfield made during his career,* it would seem that on-set flubs were relatively rare (only two prop mistakes, for example, are listed under "Goofs" at imdb), but that is hardly an indication of the over-all quality of the movie. Let it be said: The Monster Maker is far from a good movie in any way, and really evidences nothing that makes it worth watching. 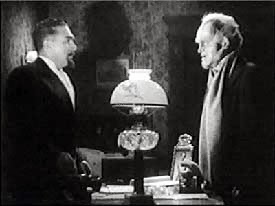 The plot is wonderfully inane: A mad scientist named Dr. Markoff (J. Carrol Naish of The House of Frankenstein [1944] and Dracula vs Frankenstein [1970])** gets the hots for Patricia (Wanda McKay, the wife of Hoagy Carmichael, also seen in Voodoo Man [1944 / trailer / full movie] and Bowery at Midnight [1942 / full movie]). Patricia, the daughter of famed pianist Anthony Lawrence (Ralph Morgan of Night Monster (1942 / trailer / full movie) and Condemned to Live [1935 / full movie]), is a spitting image of Markoff's former wife. (She, we learn along the way, had killed herself years earlier after the insanely jealous Markoff turned her into a monster to stop other men from looking at her.) Patricia, however, is not interested in the Doc's attentions, so to force her to marry him, he injects her father with an acromegaly-inducing agent, thus turning him into a monster, offering the cure in exchange for her hand... 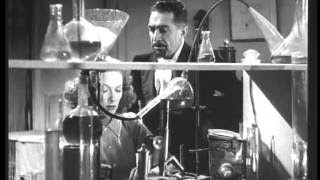 A much too talky and slow and dull affair, The Monster Maker is simply boring. The acting is good enough for a film of its ilk, which means "not very", and what transpires on screen is neither enthralling nor suspenseful, while the extremely mundane cinematography and direction simply nails the coffin tight. A few laughs are garnered by the totally out of place inclusion of an ape (played by the legendary Ray "Crash" Corrigan, Hollywood's most active ape actor ever, seen below in an old cheesecake photo we found here) and a ridiculous ape-sent-to-kill interlude — the latter of which also makes space for a totally left-field Rin Tin Tin saves the day scene, only instead of Rin Tin Tin we have Ace the Wonder Dog. But as bad as The Monster Maker is, it never achieves that transcendental state required by a truly enjoyable, good bad movie. 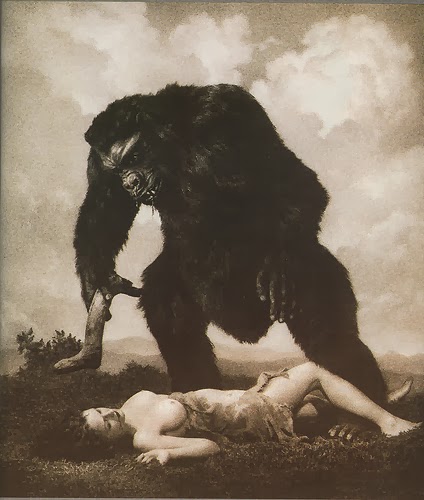 There is the added attraction of one of the past's many "Forgotten Garbos", Tala Birell (of Women in the Night [1948 / full movie] and The Frozen Ghost [1945 / full movie]), as Dr. Markoff's love-sick (and oddly brainless) helper Maxine, but she, like everyone in the movie, hardly makes a lasting impression and, more than anything else, leaves one with a perfect understanding why her career in the US never went anywhere.
The Monster Maker — a film to fall asleep to, and not much more. 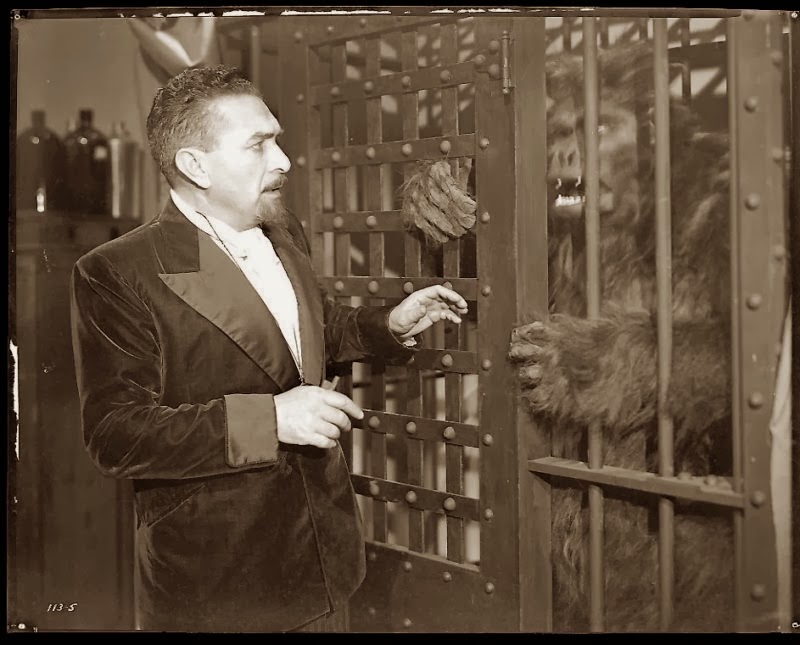 * The other four being the equally or only slightly less unimpressive The Flying Serpent (1946 / full movie), The Mad Monster (1942 / full movie), Dead Men Walk (1943 / full movie), and the likely lost film Fight That Ghost (1946), which, in all truth, is far more an Amos and Andy kind of horror comedy (starring the forgotten comedy duo Judge [Dewey] "Pigmeat" Markham and [John] "Shorty" Murray) than a real horror movie. 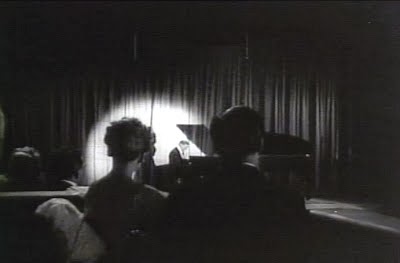 ** Shades of Maniac (1934), and totally immaterial to the events of the movie: "Dr. Markoff" is not the real Dr. Markoff, but is rather a man pretending to be Dr. Markoff, whom he actually killed before the movie even began and whose identity has taken over — and whose experiments he also continues. 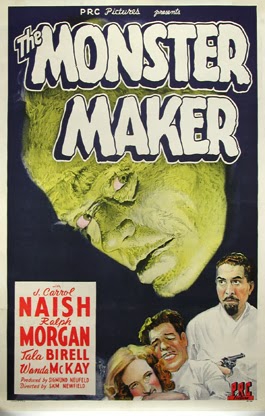 The Monster Maker — the full snoozer: