GIF courtesy of Network Awesome's tumbler.
Once again, Boing Boing leads us straight to a blast from our past. We don't remember how old we were or where we saw it — and, indeed, we never actually saw all of it — but in our younger, more impressionable days we once caught the ending of a truly disturbing, expressionistically drawn animation film in which a gluttonous man was... well, see the end of the short. Way back then, we didn't see the film start, we didn't know what it was called, and we never saw it again, but we also never truly forgot those few minutes we saw — indeed, it inspired a nightmare or two in our pre-teen days.
And then, unexpectedly to say the least, Boing Boing had it in their daily email the other week. After decades, we now know the short was (appropriately enough) entitled Hunger. Hunger was made in 1974 by the Hungarian-born Peter Foldes (1924 — 29 March 1977), one of so many forgotten, interesting, but not overly productive animated-film makers of the world.
Network Awesome says the following about the good man, who studied painting at the Slade School of Art and the Courtald Institute: "Peter Foldes was [...] one of a number of Hungarian émigrés drawn to animation. Following his relocation to Britain in 1946, Foldes became closely associated with the Halas and Batchelor Animation Studios. Founded in 1940, the studio was known as the British Disney, producing hundreds of animations ranging from commercials and public-information films to full-length animated features, notably [the first British full-length animated feature] Animal Farm (1954 / trailer) [...]. His work achieved considerably notoriety after A Short Vision (1956) was screened on the Ed Sullivan Show. The film, which had been assembled in the Foldes' kitchen, graphically depicts the annihilation of the world. A blunt Cold War allegory, the experience of watching it apparently left much of Sullivan's audience traumatized." 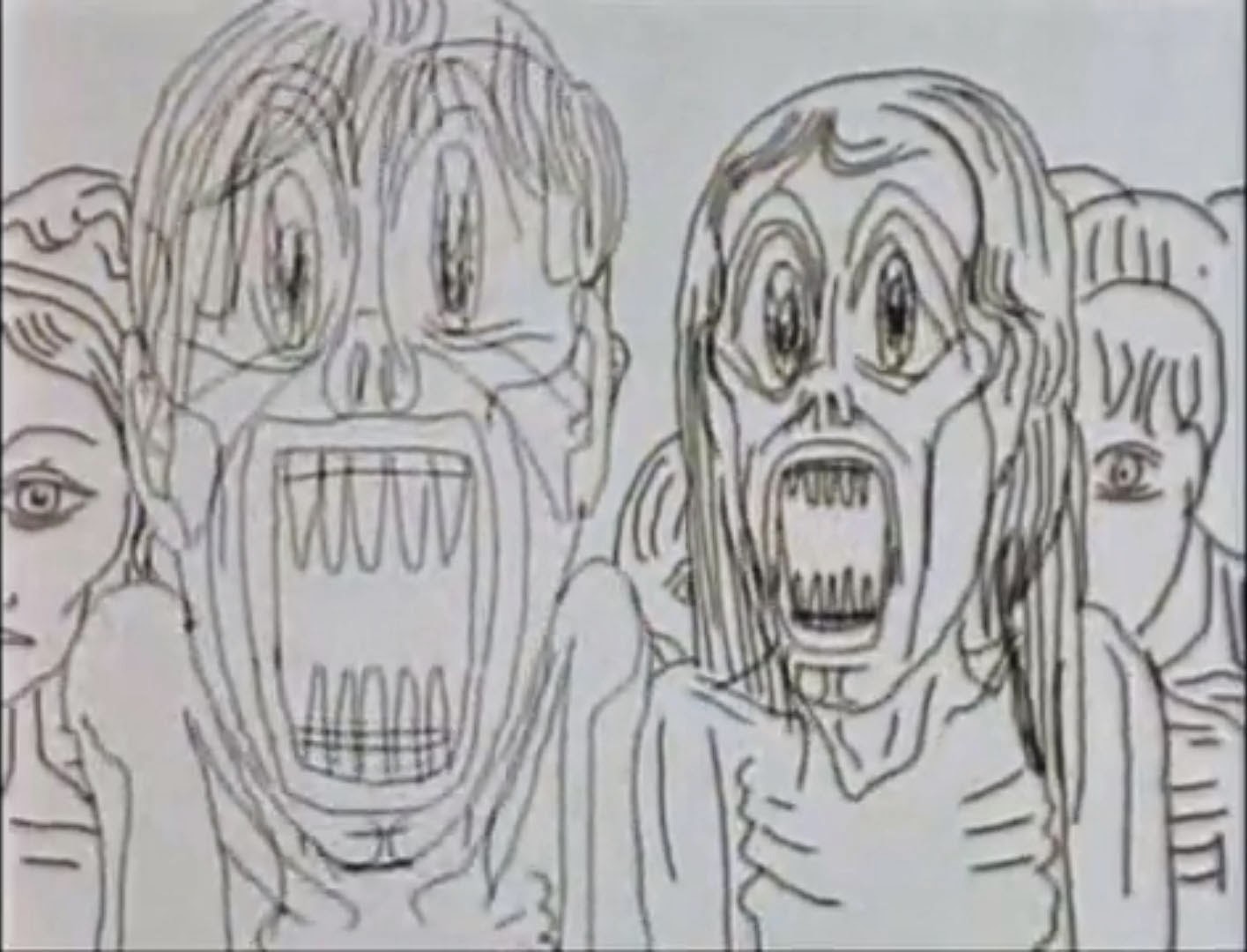 A Short Vision (full short), which looks much like the animated film that Bernard Buffet (10 July 1928 — 4 October 1999) never made, is an amazing and disturbing film and, likewise mostly forgotten today, is equally worth being chosen as our Short Film of the Month — but the unstated rule here at A Wasted Life is that any given filmmaker can only be chosen once, and we've chosen Hunger.
Hunger, which was nominated for an Oscar as Best Animated Short in 1974 (it lost to Bob Gardiner &  Will Vinton's equally nightmarish Closed Mondays [full film]) — "as well as receiving a special jury prize at Cannes, a Bafta and a Silver Hugo" — is generally touted as one of the first computer-animated films ever made. (The first one being, arguable, Hummingbird [1967 / fragment].) Hunger, however, was Foldes' second computer-animated film, preceded as it was in 1971 by the less interesting experimental short Metadata (full film). Hunger, which took one and a half years to produce, takes the then-new technical possibilities experimented with in Metadata, particularly those offered by morphing, and melds them successfully with the almost expressionistic drawing conventions found in Foldes' 1967 short Un Garcon Pleain d'Avenir ("A Boy with a Big Future") and the bleak and merciless view of the world found in A Short Vision.
In its view of greed and gluttony, Hunger is possibly even more relevant now than when it was made, as the gap between the haves and have-nots is bigger now than ever.
Hunger by Peter Foldes:
The memorable music is by Pierre F. Brault (3 August  1939 — 14 January 2014), and while we are sure we've heard it sampled somewhere, we can't remember where... anyone know?