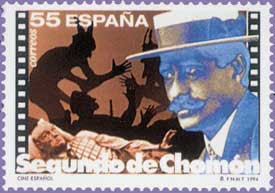 This month's short film is the oldest one we have ever presented here at a wasted life — it beats November 2015's The Mystery of the Leaping Fish (USA,1916) by 8 years and February 2016's Un Chien Andalou (France, 1929) by 21. We would be lying if we didn't say that The Haunted House looks its age but, that said, we still find this super-early haunted house comedy as an amazing piece of film history, one that can and should be appreciated as an early visual and special effects treat. With perhaps a few too many pratfalls, but those were simplier days...
Though he has slowly gained enough recognition to at least be given a commemorative postal stamp (way above) in his homeland of Spain, the Spanish film pioneer Segundo Víctor Aurelio Chomón y Ruiz, aka Segundo de Chomón (18 Oct 1871 – 2 May 1929), remains unjustly forgotten elsewhere, if not in general. A former concessionary for Pathé in Barcelona, de Chomón entered filmmaking after moving to Paris with his wife, the even more-forgotten French silent film actress Julienne Mathieu (21 Dec 1987 – 1 Dec 1943), whom he eventually featured in at least 31 of his magical shorts — including The Electric Hotel, also from 1908, whence the GIF below comes. We don't think she's the female, however, found in The Haunted House. (Trivia: The Electric Hotel is also the only film director Segundo de Chomón himself is known to have acted in — in the movie, the man alongside his wife is he.)

De Chomón is arguably one of the first truly great visual tricksters of film: "With his innovative use of early splice-based tricks and a penchant for optical illusions he is often compared to the slightly earlier Georges Méliès (8 Dec 1861 – 21 Jan 1938), and indeed has been dubbed 'The Spanish Méliès' by some. Though the similarities are clear, Chomón departs from Méliès in his variety of subjects and his use of animation, an art form he played a key role in developing." [Public Domain Review]
De Chomón's output was primarily short films, but as a cinematographer and/or tricks director he worked on an occasional feature movie, including Giovanni Pastrone's epic Cabiria (1914 / full movie), the film in which the popular character Maciste makes his cinematic debut, and Abel Gance's Napoleon (1927 / trailer).
James Stuart Blackton (5 Jan 1875 – 13 Aug 1941) possibly invented stop motion, a technique he used as early as 1906 in his short Humorous Phases of Funny Faces (1906 / short). But as Animacam points out, "It was Segundo de Chomón who perfected this technique, taking it to lands already very similar to those of today."
Interestingly enough, Blackton released a short called The Haunted Hotel in 1907 (full short), a film that bears so many resemblances to The Haunted House that it could start an argument about the differences between paying homage, borrowing, and cribbing. Regardless of where one stands on this argument, The Haunted House, like so many of de Chomón's short films, nevertheless reveals great visual talent, innovative (if now primitive) use of technology, and an exploratory nature — not to mention a truly amazing, surreal imagination.
Enjoy… and then check out his other shorts: those that still exist are public domain.
Posted by Abraham at 10:09:00 AM