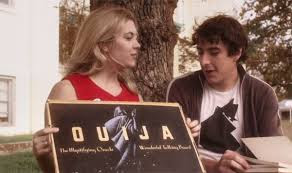 A few years older than that other faux horror movie trailer we so like, Handjob Cabin (2015), this Austin-lensed faux trailer, Hell No: The Sensible Horror Film, not only has as many bull's-eyes as that earlier off-color project, but almost garners as many laughs.
In his trailer for a non-existent horror movie, one that would surely be 0% scary if it were ever made, director and scriptwriter Joe Nicolosi (with co-scripter John Freiler) takes pointed and funny jabs at the idiocies that have served as the plot catalysts for an untold number of horror movies since the dawn of film horror. (See, for example, Segundo de Chomó's The Haunted House [1908], our Short Film of the Month this month. Even therein, the trio seek shelter in a scary-looking deserted house...)
Hell No is a filmic ode in trailer form to the truly foolhardiness (if not sub-intelligence) displayed by too many characters in the average horror movie, and that drives so many of us — horror fan to horror hater — to distraction. Here, however, the interchangeable non-characters that are the fodder in so many films — characters that exist (like their actions) only to drive the movie forward and supply the uncreative lead-up to their demise — unexpectedly reveal themselves as undeserving of a Darwin Award. Watch it, as Hell No's three minutes are truly "balm for your cinematic irritation".

But let's face it, as Nicolosi himself kinda infers by some of the fake voiceover used in the trailer, if characters in horror movies weren't wont to make all those stupid decisions, horror movies would be pretty boring.
As an extra, check out Mike Castro's short Stay Indoors (2017).
Posted by Abraham at 4:25:00 PM