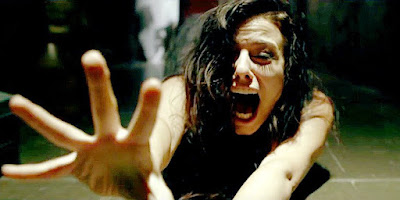 
Well, though Bennet Silverman wrote and directed this little faux trailer, we chose to ignore his advice 'cause in all truth we like to watch. All we can say is that this is truly a faux trailer to a horror movie the time of which has come! (Where's Eli Roth when you need him?)
Handjob Cabin is a nifty take on any number of haunted cabin in the woods horror, from before Evil Dead (1981) to long after Cabin in the Woods (2012 / trailer), with a dash of Nippon horror (well, at least in the look of the ghost). Once again, four friends choose the wrong cabin to work off their frustrations — and meet a fate so many a man has suffered, but till death.
The moviedb — which (hah-hah-hah) claims that a 2 hour 3 minute long version of the film exists that cost $235,436.00 to make — identifies the faux trailer' s cast of unknowns. The vengeful ghost with calloused hands is played by Jenna Willis (demo reel); her male victims are Jackson Kendall, who plays "Jackson", and Jareb Dauplaise, who plays Jareb. Jareb managed, in real life and "with help from his family including his grandma Patricia Lytton and mostly God", "finished school and moved to Hollywood by himself". He can also be found somewehre in such fine fare as Dark Mirror (2007 / trailer).
The true star of the faux trailer, however, a female we would let practice on us, is the beautiful Nicole Alexandra Shipley — as "Nicole" — in a rare turn not playing an un-credited pretty face in the crowd (as in Guardians of the Galaxy, Vol 1 [2014 / trailer1 / trailer 2], for example, where she had the important role of "Pretty Xandarian").
Posted by Abraham at 10:06:00 AM