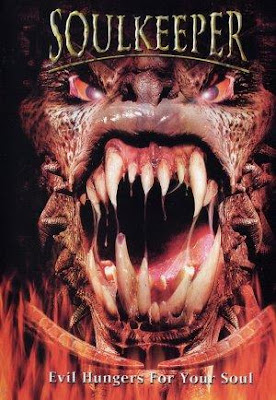 Just how far would you go to save humanity? If cheap-shit, shot-on-video movies can manage to make the viewer ruminate, ever so briefly, on an existential question of that sort, then the cheap-shit flick can't be all that bad, can it? 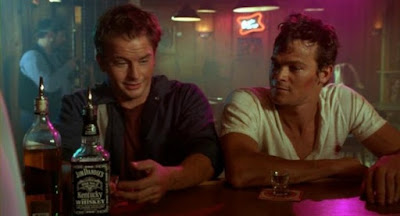 And that is the case of Soulkeeper, which was originally shot as a TV flick but hit Europe as a direct-to-DVD movie. In all truth, Soulkeeper is far more entertaining than it probably should be, which in turn also makes it better than it probably should be. And if the epilogue with the Red Head (Ali "Hubba-Hubba" Landry, of Repli-Kate [2002 / trailer]) is perhaps tacked-on happiness so as not to totally destroy the light humor that infuses the entire movie, the actual main climax does indeed lead to the question above — assuming, unlike many American voters, you still sometimes use your brain to ruminate over philosophical or intellectual questions (of any sort) instead of lapping up the idiocies of demagogues. 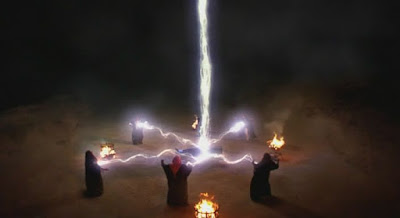 In any event, those who ponder the needless might also be led by the movie to question whether a Protestant or Jew or (GASP!) Muslim would be capable of saving the world, for Confession is a Catholic thing — but watch the movie if you want to know the relevance of that contemplation. 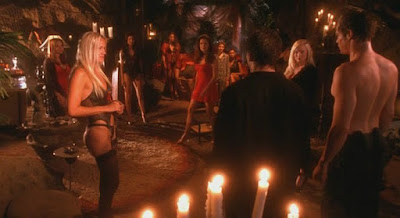 But to get to the movie: Director and scriptwriter Darin Ferriola — whom we suppose is probably Catholic — not only supplies a pretty tight script (but for a few highly unlikely dues ex machina), but he also manages to keep the burlesque roots of his for the most part family-appropriate movie from tilting into full stupidity. (Not to say it isn't sometimes sort of stupid, in a fun kind of way.) Also, more than once he throws in some nice camera moves that reveal if not an eye for film than at least an interest in taking advantage of the media — indeed, it seems odd that since Soulkeeper, he appears to have made only one other film (the comedy Mr Fix-It [2006 / trailer]). 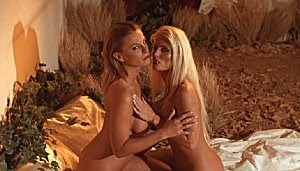 For those who like the exploitive, as we do, the biggest flaw of Soulkeeper is that the nudity is discrete and the gore less than spectacular — but then, this is a TV movie. It is a credit to the film that although Soulkeeper lacks the aforementioned qualities in any quantity of note and never truly delvers any full-throttle scares, it still keeps the viewer both intrigued and entertained. Not only that, but more than once you'll probably find yourself flat-out laughing (and not at the film, but with it). 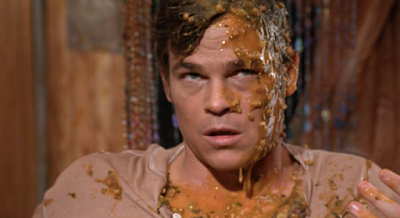 More so than a horror movie, Soulkeeper is a bromance adventure flick, only instead of, dunno, saving some nation from a dictator or robbing a casino, the two somewhat clumsy thieves-for-hire in Soulkeeper end up being the "chosen ones" that should save humanity from total damnation and the loss of all humanity by stealing the Rock of Lazarus, which is the key to bringing all evil souls to Earth and pretty much ruining everyone's day. 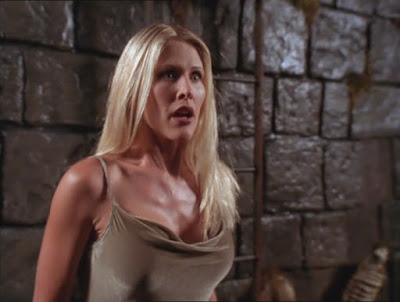 Sounds serious, but the opening "heist", in which our intrepid duo, Corey Mahoney (Rodney Rowland, of Savaged [2013 / trailer], I and Know Who Killed Me [2007 / trailer]) and Terrence Christian (Kevin Patrick Walls, of Blade [1998 / trailer], and Scream [1996 / trailer]) "acquire" Lincoln's hat dressed as Lincolns, reveals that they are closer to a slim Laurel & Hardy than they are master thieves. Subsequently unemployed, they look elsewhere for employment and by way of two hot broads and the mysterious Pascal (Brad Dourif, of too many noteworthy projects to mention), more or less end up working for God. God is not a helpful employer, to say the least, and even the mysterious Mallion (Robert Davi, of Predator 2 [1990 / trailer], A Perfect Vacation [2015 / trailer], Maniac Cop 2 [1990 / trailer] & Maniac Cop 3: Badge of Silence [1993 / trailer], Dark Alien [2014 / German trailer], and Sicilian Vampire [2015 / trailer]), a supposed "guardian angel", is less than spectacularly helpful. (Indeed, he almost gets Terrence killed at the local library — a crappy "guardian angel", to say the least.) 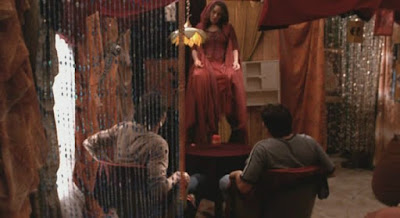 In all truth, the sudden appearance of the familiar faces of the three cult, second-tier or has-been actors (depending on one's view) Brad Dourif, Karen Black, and Robert Davi are a little jarring: because of their familiarity, their cameos almost disturb the narrative itself. And while it is fun to watch Brad Dourif tackle his imperturbable character and his ridiculous accent with an almost campy seriousness, neither Black nor Davi are truly needed in their parts. (That said, the whole scene with Magnificent Martha [Karen Black] almost achieves an Airplane! [1980 / trailer] level of humor.) Perhaps the best "star" cameo is by Debbie Gibson in a super-tiny part that is so inane, so sudden, so on-the-spot, and so short that it is actually a plus point. (Imagine that, if you can.) 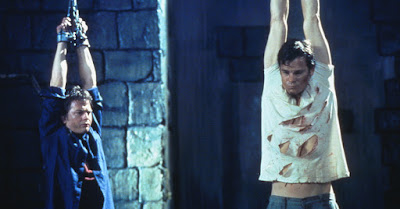 Soulkeeper is nowhere near a good movie, but it is a fun one. It's the type of movie you can watch with your kids, though some good smoke would probably help make it even better. But whatever you do, just don't go into it expecting to be scared.
Posted by Abraham at 3:38:00 PM