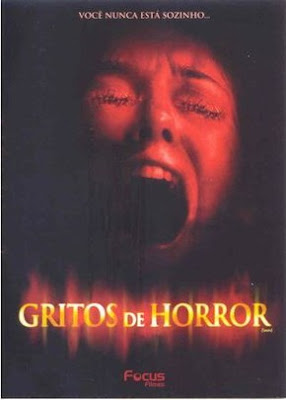 (Spoilers.) This obscure "horror" movie is the direct-to-video feature film directorial début of the unknown Ukrainian-born, LA-based filmmaker Boris Undorf, who wrote the script as well. Though initially well-received at various smaller film festivals, where it garnered a respectable amount of awards, Sonata is now more-or-less a completely forgotten film. Unjustly so. 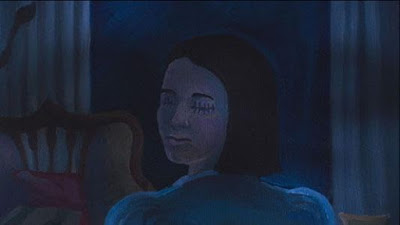 Odd indeed that when Boris Undorf made the movie, he didn't bother writing "Based on a True Story", but then, perhaps he didn't know the true story that his movie closely, if possibly unintentionally, echoes: that of the unhinged Spanish, proto radical-feminist Aurora Rodriguez (23 April 1879 — 28 Dec 1955) and her daughter Hildegart. Aurora was a firm believer in eugenics who, thanks to an unknown donor found via newspaper advertisements, produced her amazing daughter, Hildegart (born 9 Dec, 1914), a brilliant intellectual prodigy who spoke six languages, possessed a law degree, had written masses of articles and books, and become an international leftist leader all by her late teens when, as she tried to become an independent woman and leave her overbearing mother, she was shot to death in the early morning of June 9, 1933,* by that said mother.
* Another date sometimes given online is April 11, 1931. 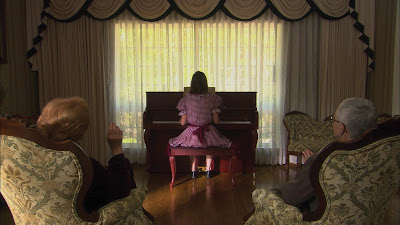 An intriguing and true tale, filmed prior to Sonata by the Peru-born Spanish filmmaker and actor Fernando Fernán Gómez (28 Aug 1921 — 21 Nov 2007) in 1977 as Mi hija Hildegart / My Daughter Hildegart, and again seven years after Sonata as a short film by Sheila Pye entitled The Red Virgin (2011) — "Red Virgin" being the nickname bequeathed Hildegart while still alive by the popular press. So, though the historical tale was perhaps, possibly, not known to Boris Undorf, let us paraphrase some famous words here in reference to Sonata: "The following is based on a true story. Only the names [and places] have been changed to protect the innocent." 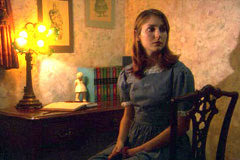 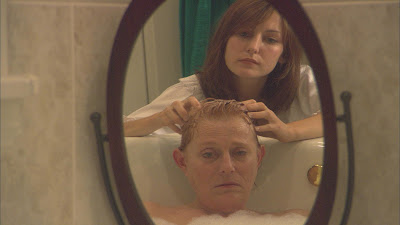 Woe be the fragile young adult with raging hormones who is abused emotionally, psychologically, and physically by those elders they should be able to trust — and woe be those who do the abuse. And Megan's mother Samantha is an abuser, if primarily psychological: the self-written fairytale she has told her noticeably immature daughter virtually every night her entire life, which involves a mother who sews the eyes of her daughter shut when the daughter finds love, reveals the foundation of her abuse. The daughter is hers, and no one else's. But, as one knows from many a fairytale, a Prince Charming often shows up to throw a spanner in the works. In this case, it is the dark, mysterious stranger that Megan meets one afternoon while delivering a basket of fruit … or did she actually even meet anyone at all? 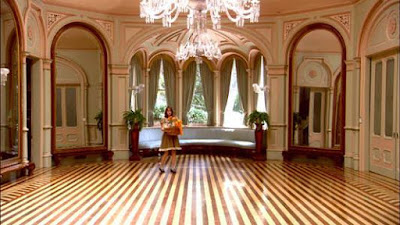 In all truth, we (a group of beer-swilling guys out for bloody film full of laughs) put this one in our DVD player expecting, well, guts and guffaws, and we were seriously disappointed. But, as our rule when watching mystery DVDs is "what goes in stays in till the end", we slogged on tossing out insulting bon mots as we drank our beer and ate our chips and flips. It speaks for the film that, as slow and deliberate as it is, the bon mots progressively became fewer and, about 20 minutes into the movie, Sonata enjoyed the engrossed silence of a group whose filmic tastes generally preclude anything that might be described as "serious". But while we wanted trash, we did indeed get a serious movie — and ended up really liking it. 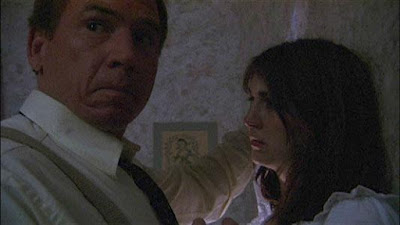 Sonata is a bit of strange fish. Sold as a horror movie, it is far more an obviously low-budget, slow-burning, and linear psychological drama that meanders, fascinatingly, to an obvious and tragic conclusion. The camerawork, betraying a healthy understanding of the works of Alfred Hitchcock, is stylish but not overt; the pacing languid and the acting variable. All, however, combine to create a tale that gets under the skin as both the expected and unexpected of the narrative get revealed and the inevitable, tragic end comes to transpire. 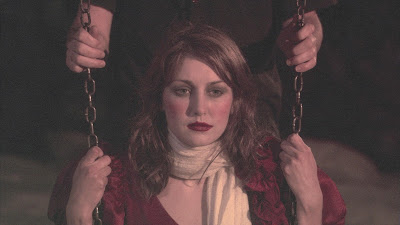 That Megan is messed up is never a doubt, but her mother is also just as obviously far gone. Thus, after a certain point in the movie there is also little doubt about how Sonata shall end. Nevertheless, the viewer remains intrigued and, once the final credits roll, the overriding feeling that remains is that of regret for Megan and the tragedy that she was literally programmed to be part of. There is a short exchange about a pet canary in the past that serves to reveal that the tragedy had been on the back burner for some time. All that it was waiting for was Prince Charming's wrench in the works. 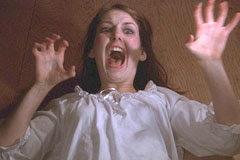 Sonata is anything but trashy or exploitive; it is a serious labor of love from a filmmaker who displays a lot of promise both as a director and screenwriter. Due to its general lack of speed, however, Sonata is definitely not everyone's cup of tea. But if you like slow burners or films that succeed at becoming more than their parts, you'll want to give Sonata a go. If you can even find it anywhere.
Posted by Abraham at 11:37:00 AM

A Bucket of Corn said...

Sounds like a really awesome experience. Great write up, I will have to seek this out.

Yo: if this review helps bring Sonata to the attention to anyone, then it's done its job. Should you manage to find the movie anywhere and do watch it, please let us know what you thought about it. Even if your experience is different than ours, we'd like to know the what, why, and how.