Short Film:The Facts In the Case of Mister Hollow (USA, 2008) 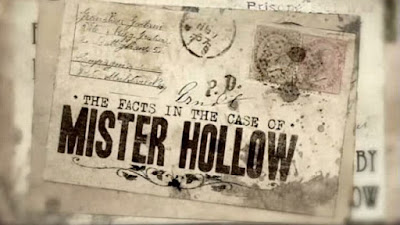 Here's an arty short horror film that overflows with atmosphere. The Facts In the Case of Mister Hollow was written by Rodrigo Gudiño, and directed by him and Vincent Marcone. Rodrigo Gudiño "is the publisher of Rue Morgue Magazine, senior coordinator of the Rue Morgue Festival of Fear National Horror Expo, producer of the Rue Morgue Podcast and co-programmer of Rue Morgue's CineMacabre Movie Nights". His first feature film, The Last Will and Testament of Rosalind Leigh (trailer), was released in 2012.
The Facts In the Case of Mister Hollow has won a number of awards since its release, and it's easy to see why: beautifully made, mysterious, and visually alluring, it is a slow burner that tells its tale in an uncommon fashion. The Facts In the Case of Mister Hollow is a horror film, without doubt, but it is less a traditional narrative than a visual impression that evolves the closer you look, proffering chilling tidbits and clues that offer the semblance of storyline but no hint of a conclusion. It features a certain level of dream logic and visuals, and like many an unpleasant dream (or full-fledged nightmare), it leaves as many questions unanswered as it makes revelations. Enjoy.
Posted by Abraham at 7:36:00 AM