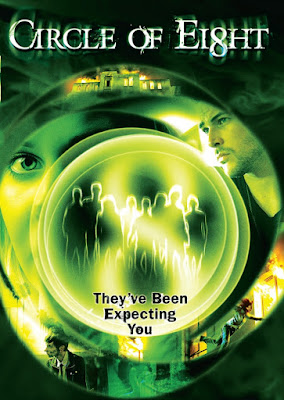 (Spoilers.) Hey! Remember that really miserable Tara Reid movie entitled Incubus (aka A Total Piece of Shit) from 2006? (It's really OK if you don't; we wish we didn't.) That movie's only true claim to fame, other than that it is truly a lousy flick, is that it is the first film production created specifically for the web and available as a direct-to-download movie by AOL. Three years later, by 2009, not only were on-line movies relatively common, but there were even web serials: films which, much like the cliffhangers of the Early Days of Hollywood, were made to be released in instalments ("webisodes"). This flick here was one such series, a Paramount Digital and Mountain Dew production for MySpace, and was subsequently released as a DVD. (There is a high level of Mountain Dew product placement in the movie, but we're not really sure being presented as a liquid that can be used to paint with is really the best way to gain new drinkers.) 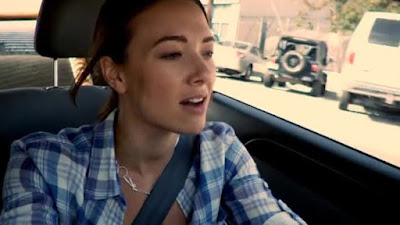 We caught Circle of Eight late one night on TV while channel hopping. Had it not been for the intriguing music during the credit sequence (by Mark Mothersbaugh) we probably would've zapped further, but the music kept us watching till the flick began, and then the flick managed to catch our interest and kept us watching all the way to its confusing mess of an ending. We even stuck around for the second ending — yep, the film ends twice: in itself perhaps logical when considering the underlying premise of the story, but nevertheless oddly ineffective and anti-climactic. It also conveys the feeling that the filmmakers were too chickenshit to go with a downer ending. (Though we would also posit that the double ending is actually the production's way of using two of the possible endings that one could interactively vote for on-line. Wonder what the other possible endings were.) 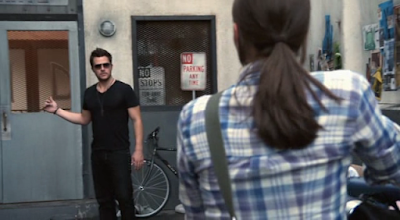 Circle of Eight opens with a confusing montage of scenes that includes police entering a burning building, indefinite things transpiring underwater, and a female body plummeting from a high building into the camera. From there, it cuts to an interminably long scene of babealicious Jessica (Austin Highsmith of Room 33 [2009 / trailer]), full of happiness and life, singing loudly to the music as she drives in circles through downtown LA. A nice montage which, much like those of Lola running in Lola Rennt (1998 / trailer), intercuts areas that are miles apart as if they are next to each other. Finally, however, she parks her car, grabs her stuff, and enters The Dante, a labyrinthine apartment building managed by Ed (John Bishop of Silent Night, Deadly Night [1984 / trailer] and Seven Psychopaths [2012 / trailer]), whose work desk is in the service elevator because, well, it's a groovy place to have your work desk. 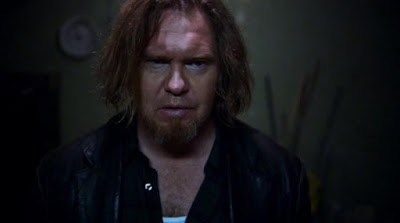 Although Jessica has seemingly never before been in The Dante, she has the lease to a huge, loft-like apartment there — a dream flat if you get down to it, but the other inhabitants of the building are all voluble nightmares that like to burst unannounced into her apartment or blather without pause to her in the dark hallways. Everyone in The Dante seems weird, the least weird one being the artist stud Evan (Ryan Doom of The Open Door [2008 / trailer], Red Velvet [2008 / trailer], Circle [2010 / trailer], The Roommate [2011 / trailer] and Most Likely to Die [2015 / trailer]), who would rather paint her with Mountain Dew or press the flesh with her. The place, as dark and shadowy and mysterious as it is, would probably be a cool place to live were it not for the dead bodies Jessica keeps finding and that also keep disappearing. And what is hidden in the storage room, a room she is expressly forbidden to enter? (It's even a contingency on her rental agreement.) 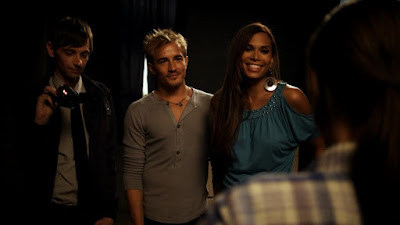 Oh, yeah: she happens to move in on New Year's Eve, and everyone in the building — all eight that we meet, excluding the model-like lesbians needed for the mandatory naked flesh scene that really does nothing for the narrative but does feature some nice if darkly shot tits — are obsessed about that night's party up on the building's roof. 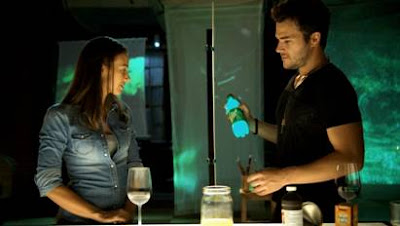 Circle of Eight is a mental mind-fuck film that tends to confuse more than it does make sense, and all the scares end up being pretty wimpy, but for all that (and some occasionally very dodgy acting) the movie is nicely shot and lit and edited and oddly captivating. If movies had older, more-successful brothers, Circle of Eight's would probably be Jacob's Ladder (1990 / trailer), The Attic Expeditions (2001 / trailer), or maybe even Lost Highway (1997 / trailer). It is basically an off-kilter Twilight Zone-like script that meanders beyond clever and creepy or dread to become somewhat incoherent and, finally, almost annoying. Luckily, it remains interesting even when it devolves into the non-sensical, perhaps in part due to the quality of its direct-to-video cinematography and the overall atmosphere that TV director Stephen Cragg manages to create and sustain. 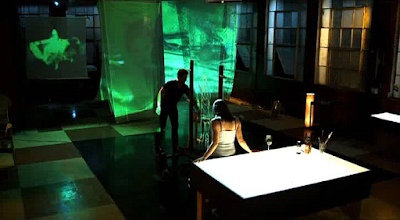 The key to the narrative lies in two philosophical ideas, neither of which truly jell in the movie. The clue, of course, is the name of the building: Dante, as in the name of the Italian dude who wrote The Divine Comedy. The concept of going through hell and purgatory to reach paradise is reflected in the narrative, as it the Buddhist concept of being reincarnated until achieving atonement for past mistakes. In Circle of Eight, it would seem Jessica's reincarnation always starts at the same point (with her driving across the LA river bopping to loud music) and has obviously been repeated in ad nauseum, much to the annoyance of everyone else involved — right down to passers-by and pedestrians. And while we do learn about what she must atone for, we never learn why the others are there, why they are cognizant and she isn't, why the artist love interest (we assume) joins her when she finally hits the jackpot, and why the rest are still around after the lovebirds achieve atonement. (There are many more unanswered questions than these in the movie, but to list them all would take too long.) 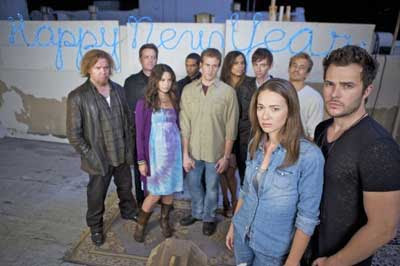 OK, the roots of Circle of Eight were an interactive series in which viewers could affect the storyline and access further information and behind-the-scenes stories of the various characters, so probably the webisode viewers had a bit more information at hand than found in the linear storyline of this movie. As written by Dave Brewman and Brian Horiuchi, the former of whom has disappeared and latter of whom went on to write and direct Parts Per Billion (2014 / trailer), Circle of Eight, despite its Circe-like appeal, plays out as if it were based on a script for cheap, low-budget horror movie farted out by David Lynch after a particularly bean-heavy Bob's Big Boy meal following a Twilight Zone all-nighter on the local TV station. 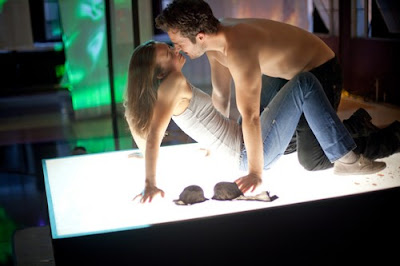 Circle of Eight is good for a gander, but far from being a good movie. Whether or not you like it will probably depend on how much you like well-shot incoherency. We sort of liked it, though it really could've done with less Mountain Dew and more blood, guts, and skin. Had it had more of the last three, the lack of coherency would perhaps not be so noticeable. 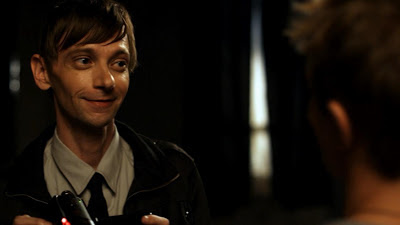