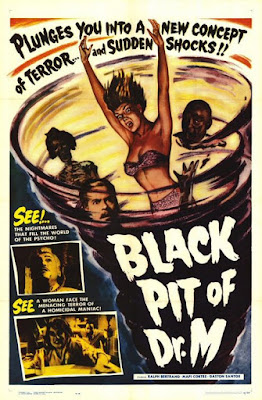 Aka Mysteries from the Beyond. Original title: Misterios de ultratumba. And no, The Black Pit of Dr. M is not an instalment of the campy and fun German Dr. Mabuse franchise. That franchise, if you exclude the first two Fritz Lang flicks, Dr. Mabuse the Gambler (1922 / clip) and The Testament of Dr. Mabuse (1933 / German trailer),* didn't start until the third Fritz Lang flick, The Thousand Eyes of Dr. Mabuse (1960 / trailer). This flick here is one of the many B&W Mexican horror films from the Golden Age of Tequila Horror (the 50s to early 60s).

* Lang, assisted by the long forgotten French assistant director René Sti (13 April 1897—29 Oct 1951), filmed a French version of this film, entitled Le Testament du Dr. Mabuse (1933), at the same time as the German version but with a mostly different cast. We, however, don't really view that as a third, separate movie. 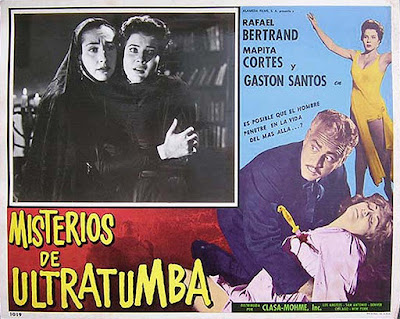 We stumbled upon the trailer to The Black Pit of Dr. M while putting together our blog entry Misc. Film Fun: Three Dance Scenes last September. Dance scene #3 comes from the Mexican film Cien muchachas (1957), which was written by Fernando Méndez (20 July 1908 — 17 Oct 1966). Méndez went on to direct a number of B&W Mexican horrors, most of which are unknown abroad (actually, we can't even say whether they are known within their country of origin). While we find all the trailers of Méndez' horror films intriguing, this trailer caught our eye the most. And indeed, the promise the trailer exudes could be merited: The Black Pit of Dr. M seems to enjoy strong approval by all those who have actually seen it. Indeed, on the Wikipedia page of the lead actress, Mapita Cortés, they claim: "Cortés became a sensation in the Mexican film industry during the 1950s, when she appeared in 1958's Misterios de ultratumba ("Mysteries of the Afterlife"). This movie became a contemporary Mexican classic." [Italics are ours.]
Original Trailer
(in Spanish):
If we are to believe the imdb, "The English dubbed version of this film is believed lost. Please check your attic." 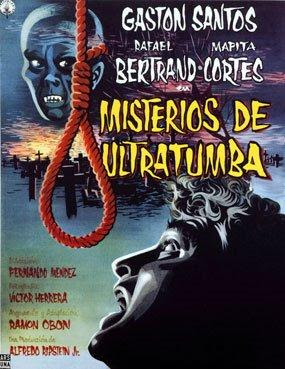 The dearly departed blogspot International Walnut wrote the following about the available subtitled print of The Black Pit of Dr. M ten years ago: "By day, Dr. Mazali (Rafael Bertrand) runs an insane asylum. By night, he lashes out at the veil between this life and the next, desperate to contact his former partner, Dr. Jacinto Aldama (Antonio Raxel), who was executed for a crime he did not commit. What follows is madness, tragedy, agonizing violence and the unrelenting horror of infinite damnation. The Black Pit of Dr. M is a masterpiece of Gothic filmmaking punctuated by shocking jolts and beautiful imagery that render it years ahead of its time. It is also a major accomplishment in chilling tone, unsettling atmosphere and wildly inventive storytelling."
Trailers from Hell version (in English),
with commentary by
Darren Bousman:
Posted by Abraham at 12:28:00 PM