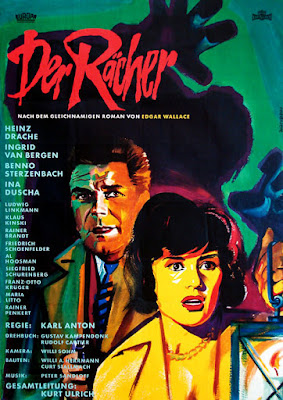 Based on the Edgar Wallace's novel The Avenger (aka The Hairy Arm), the film almost seems like a Rialto production due to the presence of Heinz Drache, Siegfried Schürenberg and Klaus Kinski — more or less the modern Krimi début of all three — but in truth it is the singular German Edgar Wallace film to come from the production firm of Kurt Ulrich, which thereafter avoided the whole genre (let alone Wallace books, the German film rights of which were soon in the firm hand of the production houses of Rialto and/or Artur Brauner's CCC). 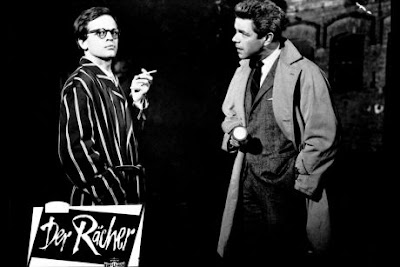 Ulrich began as a film producer in 1934, but seemingly took a prolonged break from 1937 to 1950, after which he specialized in mainstream German films such as the popular remakes of Emil und die Detektive (1954 / a scene), Die Drei von der Tankstelle (1955 / a song) and Charleys Tante (1955 / a mambo scene, featuring Walter Giller), plus lots of dramas and an occasional thriller. (His last production credit, as far as we can tell, was a shared production credit with Radley Metzger on the latter's Therese and Isabelle [1968 / trailer].) 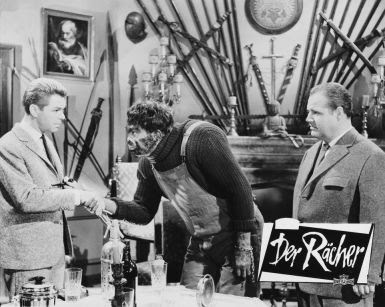 In the case of Der Rächer, Ulrich was obviously dealing with something new and not of his abilities — a gothic horror Krimi  — for the final result is disappointing, all the more so for all the chances so obviously missed. Even the on-occasion fine B&W cinematography and the competent acting of most of the cast does little to make the movie palatable, as the less-than-exceptional script is not only terribly paced but blatantly, if unintentionally and ignorantly, racist. (Back then, one can argue, they simply didn't know better, but it doesn't make it any less cringe-worthy.) 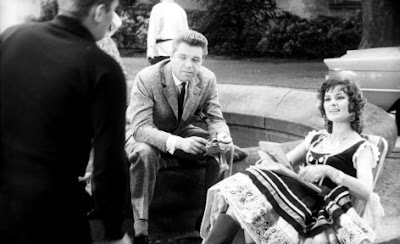 The character Bhag (Al Hoosmann, of Tante Wanda aus Uganda [1957 / trailer]), for example, is a creature of another era, a Colonialist era when the black races of Africa were seen as something less than savage, as something sub-human, if not as virtual animals. Likewise, one can only infer that the Malaysian girl kept in a tower — and undoubtedly repeatedly raped — by Sir Gregory Penn (Benno Sterzenbach) is of little true worth as a human, for Penn not only survives the film while other, less-despicable characters die, but he is in no way taken to task or punished for his inhumane and criminal activities. True, the girl does conveniently simply hightail for home when finally free, but Sir Penn also simply walks away free and easy in the end, a silent but sure sign that it's OK to rape women (particularly foreign women) if you want to. Scriptwriter Gustav Kampendonk, who undoubtedly had a low opinion of both non-Aryan races and women and a deeply rooted misogynistic bent, went on to pen the somewhat better Bryan Edgar Wallace movie, The Strangler of Blackmoor Castle (1963 / trailer / full film), directed by Harald Reinle and starring Reinle's then-wife, the always babelicious Kairn Dor. 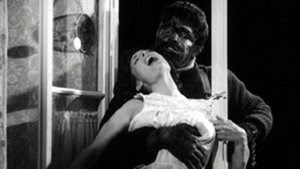 As for the Czech-born director Karl Anton, he may have been a competent director, but he flatly failed to overcome the material he was given for his last feature film, despite all the experience gathered since his first directorial effort in the early 1920s, whence he moved ever so slowly upwards from such things as the low brow drama Ein Mädel von der Reeperbahn (1930 / title song) and the NS anti-Soviet propaganda drama Weiße Sklaven (1936 / a song / full film] in the 1930s to such post-war mainstream fodder like the (first) remakes of Peter Voss, der Millionendieb (1946 / first 10 minutes) and Viktor und Viktoria (1957). Still, the argument can be made that his direction is more than adequate, as it occasionally delivers an effective shock; it is simply negated by the offensiveness of the film's less than subliminal attitudes. 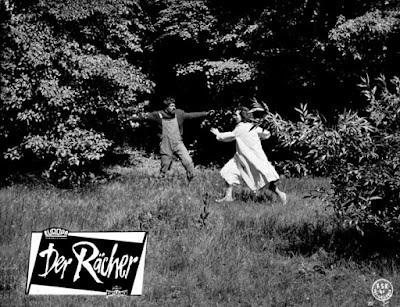 Der Rächer starts with a shock, to say the least. A car zooms out into the night and as it whips around a corner, a box is tossed from its window. Two women passing-by sit in the filth and open it and discover the decapitated head of a man. Regrettably, after this wham-bang opening scene, the film quickly becomes talk-heavy and somewhat dull, up until its last scenes in an underground cellar where three of the main characters seemingly face an unavoidable date with a guillotine. In-between, special agent Michael Brixan (Heinz Drache of, among others, Hypnosis [1962] and Coast of Skeletons [1964]) is pulled back from oversees by his boss Staines (Siegfried Schürenberg of, among others, The Inn on the River [1962] and The Hand of Power [1968]) when a civil servant of the Foreign Office loses his head, one of a number of victims of an unknown madman who specializes in decapitating either villains who have escaped justice or people who are terminally ill. (Strange combo, to say the least, but perhaps representative of the scriptwriter's mindset.) 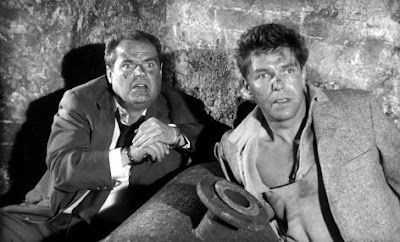 The only clues available lead Brixan to a film production near Winchester, where the beautiful but unknown starlet Ruth Sanders (Ina Duscha, a real-life unknown starlet who was out of the industry by 1963) finagles the lead role from the obnoxious star Stella Mendoza (Ingrid van Bergen of Das Geheimnis der gelben Narzissen [1961]). Ruth continually avoids the amorous advances of the obnoxious, amoral Sir Gregory Penn (Sterzenbach), who is not above sending his savage servant Bhag (Hoosmann) to kidnap the object of his base desires. After coming across a page typed by the same typewriter used for the notes found with the decapitated heads, Brixon concentrates his investigation to the area, even after his main suspect, Lorenz Voss (Klaus Kinski) also loses his head. Breaking into Penn's house one night, Brixon even discovers a Malaysian girl locked in a tower room; oddly enough, he leaves her there. Too many scenes later, Penn and Brixon find themselves handcuffed in the cellar of the true killer and about to be beheaded when Ruth — with Bhag close at her heals — stumbles onto the scene… 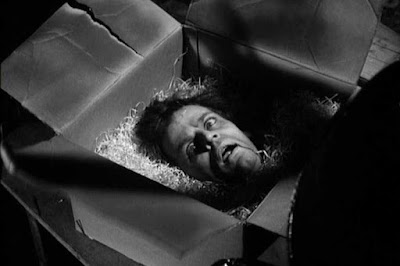 Ina Duscha is exotically beautiful, Benno Sterzenbach excels as a truly repulsive man of no morals, and everyone else does a fine job with their material — with the possible exception of Bhag (Al Hoosmann), whose overacting is as embarrassing as his whole character. The script itself is so incompetent that none of the movie's good features help in any way to make the flick any good, despite some nice B&W cinematography and bodiless heads. And while it is true that there is no justice in real life, the inappropriately distributed "justice" of this movie leaves a nasty after-taste: a character whose biggest fault is weakness and greed — Lorenz Voss — has to pay with his life, while a man as repulsive and amoral as Penn can be permitted to survive. In this sense, Der Rächer reflects a fact of life: the rich get away with it, and the poor don't. 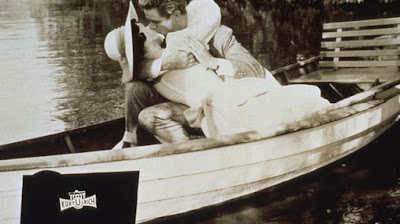