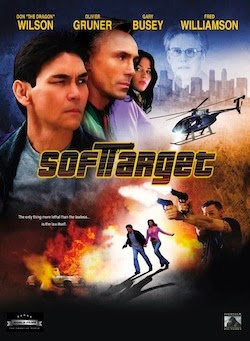 To put it bluntly, Soft Target — aka Crooked — isn't exactly a masterpiece of action. True, we did enjoy watching it — what male isn't made happy by naked love pillows (plastic or not) and shooting guns and an occasional hearty belly-laugh? — but never once did the movie ever transcend the level of low grade sub-mediocrity that every scene, every aspect of the movie, exudes. 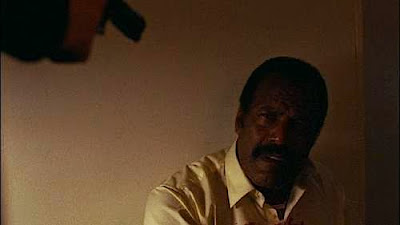 Admittedly, we did have hopes, at first, for despite the flimsy familiarity of the plot — to quote imdb: "two police detectives must protect a beautiful call girl from mob hitmen and a crooked cop" — the lineup of headlining names is impressive. But, at the latest, when the great Fred Williamson, as Dt. Jack Paxton, exits five minutes into what is at best a glorified guest appearance (done either as a favor or to pay a bar tab), we knew we had once again popped a loser into the DVD player. Luckily, however, the loser of a film was at least entertainingly funny, if always unintentionally... and there's nothing we like more than a crappy film that's funny crap. 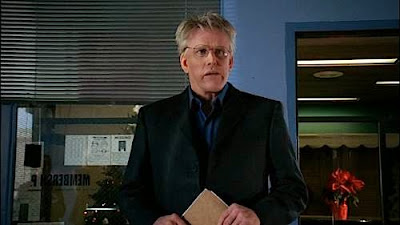 Our first laugh came when the Afro-American dude (Maurice Lamont) staked out in front of the hotel actually said "Two years more and I'm out." We knew then and there he would die — and two minutes later, he did, along with Fred Williamson and some dozen others, in a hail of bullets. And though the face of the crooked cop is never shown, the early voiceover opening the movie already reveals the mystery — and thus renders the whole "Who could it be?" aspect of the movie a farce. 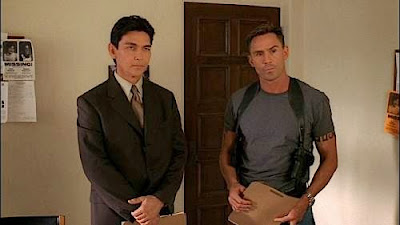 Hero Number One, Danny Tyler (Don 'The Dragon' Wilson of Night Hunter [1996 / trailer]) shows up a minute later, in a bar scene that looks tacked on from another movie, and soon thereafter he, the by-the-book man, gets partnered by Chief John Rouse (Gary Busey of Piranha 3DD [2012], A Crack in the Floor [2001] and The Gingerdead Man [2005 / trailer]) with the break-the-rules man Phil Yordan (Olivier Gruner) to find Angel (DianaKauffman, of Ted Bundy [2002 / trailer] and Glass Trap [2005 / trailer]), the hooker with plastic mammaries who saw it all. (Kauffman, by the way, followed this flick with an appearance in the video World's Sexiest Nude Women [2007], where everything she has totally pales in comparison to Erica Campbell's 100% naturals.) That the hooker also has a heart of gold is of course to be expected, as Soft Target is not only very much by-the-number but a romantic interest is needed for Danny the Dragon and his dragon. Mr. Break-the-Rules, on the other hand, has a stewardess at hand — and a very well-earning one, too, going by the look of her house. 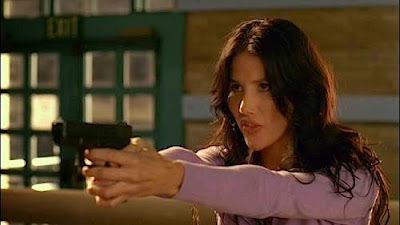 The high points of the movie, if not the most professionally executed, are indeed the silicone mountains, which are displayed in longer nude scenes than are normal for contemporary flicks of this ilk. Likewise, we do admit having a soft spot that gets hard for Olivier Gruner (of Re-Generator [2010 / trailer], Nemesis [1992 / trailer] and Savate [1995 / French trailer), who gets naked for a tub scene but, regrettably, totally fails to deliver the full frontal we've dreamt of for years. The fight scenes, on the other hand, are far between and all extremely disappointing and disjointed affairs that fail to deliver any thrill, and while the background is filled with oddly familiar faces — Martin Kove and Bret Roberts, for example — they are not really given all that much to do. 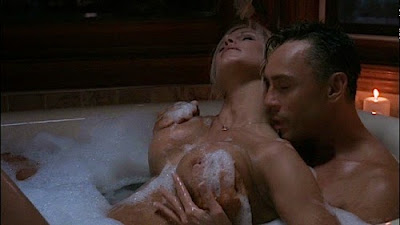 There really isn't anything to recommend about the Soft Target in regard to drama, tension, acting, narrative, direction or even action, but we did laugh a lot — deep, heartfelt belly laughs that only true jokes and religious people can normally give rise to. We don't watch many action films, but of all those that we have, this is probably one of the most cheap-looking, badly acted ones yet — it makes The Tracker (2000), for example, look like a masterpiece of cinema in comparison. 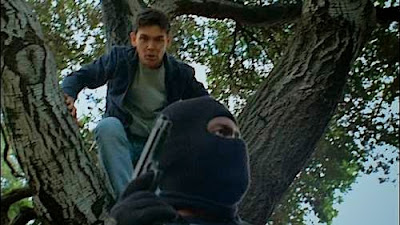 Hampered with its dull, poorly executed fight scenes and unfocused shootouts, a love-story subplot as convincing as plastic flowers, and way toooooo much background character information (hooker with heart of gold, straight cop with a corrupt suicide dad cop, etc.), Soft Target is truly a fiasco of an action film. Were it not that it kept us laughing, we'd probably be yelling for the director's head. But it did keep us laughing, and is you have an appreciation for the absurd, the stupid, the bad — Look! Don in a Tree! Look, the hooker loves Don! Watch her run away instead of back in the house! Look! Look! Danger, Will Robinson! Danger!  — Soft Target might make you laugh, too. 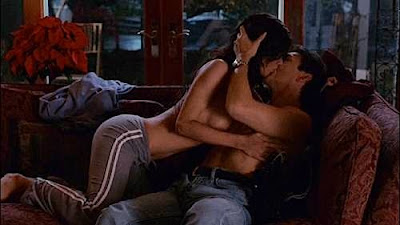 On the other hand, you might just see it as the piece of low-grade, sorry-ass shit it is. A wasted cast, if you get down to it, and though everyone involved has done worse, they have also all done better — and could and should do better.
Posted by Abraham at 9:45:00 AM

"A Wasted Life" has been included in our Sites To See #438. Be assured that we hope this helps to point many new visitors in your direction.