Just so you know, there is no such thing as Argentinean Tango — but let's move on. 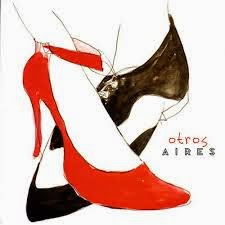 Many, many a moon ago, our better half took us to South America to see the country of her origin, Uruguay. The nation, and its oddly timeless and forgotten capital Montevideo* — not to mention the little hole-in-the-wall villages up the coast closer to Brazil — have been favorite places ever since, and were we only much more fluid, we would go there regularly, if not move there. (The problem is not always whether one can find a job somewhere, or whether one can speak the language, which we in regard to Spanish — better half excepted — cannot, but whether one wants to live on the same pay as the natives. Plus the concept of, for the second time in one lifetime, eternally losing physical, true contact with all friends and family — which is one of the drawbacks of becoming not an ex-pat for a few years, but a bona fide resident of a foreign country.)
It was during the first visit there that tango infected us, and since then tango and, even more so, milonga and various contemporary electro tangents of both have remained our favorite music.
Of course, while there in Montevideo, a visit to Argentina and Buenos Aires was du jour, and while neither that city nor the country impressed us as much as its smaller, usually ignored relative across the Rio de la Plata, what we were introduced to in Buenos Aires one night, wafting as it was from a store close to our fleabag hotel, was the music of Otres Aires, which then and there and ever since has been our favorite bands.
And today, we discovered a video to one of our many favorite songs by Otres Aires, Milonga Sentimental,** incorporating an old cartoon the name of which we do not know, though we would hazard to guess that it is from Max Fleischer. The combination, we find wonderful, as it conjoins two things we love: the music of Otres Aires and the cartoons of yesteryear.
Now all we need is an asado on the pampa with some good red wine and skies filled with more stars than you could ever conceive.
Enjoy! And buy their CDs — we have them all!
(Here you find an early version of worse quality but with images of Otres Aires in concert.)
* Screw Prague, screw Berlin (and we say that as a 30-year resident of the city on the Spree): Montevideo is the city waiting to be discovered by hipsters. Go here to see Montevideo destroyed by robots from outer space.
** A remake, of course. The original is from the great Uruguayan (born in the admittedly extremely quiet town of Tacuarembó) Carlos Gardel.
Posted by Abraham at 7:43:00 PM