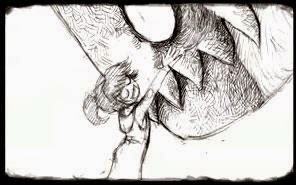 Like so many shorts, we stumbled upon this little "lo-fi" treasure on YouTube.
It was a foundation year project of Jonathan Kim, made at Cal Arts. According to his Linked-In page, Kim, who attended Cal Arts from 2005 – 2009 and got a BA in character animation, is currently a senior animator at Lab Zero Games in Los Angeles, the "forward-thinking and retro-minded [...] independent game development studio founded by the original team that brought you Skullgirls". Whatever.
Kim seems aka "PP-Infinity". He has a Tumblr site and a presence at YouTube, whence the film below comes.
The plot, as explained at Online Short Films: "The story of a lucky girl who chances upon a visit by a monster and experiences the change of her life! Flying through the everlasting sky, euphoria awaits everyone who embarks on this journey with the happiest monster!"
The short tale presented, on a symbolic level, is that of a little girl who, as we all are told we should, confronts fears. But, unlike you're told as a child, doing that doesn't always help much in the end.
"With music by the very talented Mr. Andrew Toups." Enjoy.