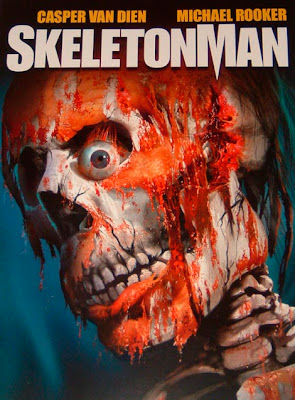 Filmed under the title Cottonmouth Joe, this little Nu Image flick was originally made for and aired on the Sci Fi Channel, but it has since somehow found its way onto DVD. It is to date (5 April 2013) the only film directed by Johnny Martin, a well-employed stuntman who has worked in the industry for decades, occasionally even appearing as a glorified extra in films such as Killer Klowns from Outer Space (1988 / trailer) or Dead & Breakfast (2004 / trailer). Martin — or at least his production company Martini Films — has also acted as producer on an indeterminate amount of low budget films ranging from science-fiction-tinged horror like Larva [2005 / trailer] to many of Cuba Gooding's straight-to-DVD thrillers like End Game (2004 / trailer) or The Hit List [2011 / trailer]. We would be hard pressed not to think that Martin has only ever directed this one film because either he or those with the financing realized in retrospect that his talents definitely lie elsewhere.

We also have no doubts that this film was intended as a serious film, as Martin's experience with ironic comedy is virtually non-existent (he had at that time only previously produced one "real" comedy, the unknown Joe Killionaire [2004]). True, Skeleton Man's scriptwriter Frederick Bailey has a limited career in comedy — he's never written one intentionally but has appeared in some, such as Roger Corman's Gas-s-s-s (1970 / trailer) — but his extensive writing and directorial output has primarily been in the field of "serious" low-budget exploitation and trash, where he has helped foist an admirable number of unknown, sometimes awe-inspiring films such as Wheels of Fire (1985 / trailer), Demon of Paradise (1987 / trailer), Equalizer 2000 (1987 / trailer) Demonstone (1990 / scene), Raiders of the Sun (1992 / trailer) and Terminal Justice (1996 / trailer), among others. All serious stuff, in any event, definitely intended for Academy consideration...

No, Skeleton Man was definitely not intended as a comedy, but serendipity made it one: the combination of Martin's total lack of directorial acumen, Bailey's penchant for banal and cliché-ridden plot and dialogue, a cast of slumming mildly talented actors and untalented actresses, a total lack of professional effects,* and editing that looks as if the editor was busy elsewhere while he cut the film have jelled in such a way that the final product, the film now known as Skeleton Man, is not just absolutely terrible but truly and surreally bad in that special way that makes the final product an unearthly and unique film of Ed Woodian proportions. Indeed, the DVD company that released the film in Germany even realized that and proclaimed it loudly on their DVD release, where they write in large letters "Hier lebt der Geist von Ed Wood weiter!" ("The Spirit of Ed Wood Lives On!").** And it is true: Skeleton Man literally drips the spirit of Ed Wood — much more so than it does drip blood, and it is (in theory, anyway) a violent film.

If we followed the plot correctly — the film isn't exactly edited to make sense — the movie is a regurgitation of the core plot of Predator (1987 / Arnie sings) but with a few slight changes: in this case here, the predator hunting everyone down is the Skeleton Man (aka Cottonmouth Joe [Dominique Vandenberg, also seen somewhere in Barb Wire (1996 / trailer)]), a supernatural American Indian who, centuries ago, went postal during an Indian wedding ceremony and massacred his entire tribe. Re-awoken by some archaeologists who dig up the wedding site, he is now an unstoppable skull-headed dude wearing a big black cape — needless to say, fashions have changed a lot since the day of the loincloth. He basically just goes around killing anyone who invades his space, although he also seems to have a penchant for indiscriminately entering industrial compounds and slaughtering the workers there, too. For some odd reason he sees people in Predator-vision, so you can run but you can't hide — not that running does much good, 'cause he and his magic horse can also jump time and space.

What should be a great idea — namely, replacing most of the ugly macho men of the Predator-inspired "Delta Team" sent in to investigate with young, beautiful and totally bonkable babes — adds to the overall idiocy of the events, for not one of the gals looks their part. To our displeasure, and unlike in the better grindhouse films that Bailey once wrote (see the trailers of Wheels of Fire and Demon of Paradise), none of the babes ever take their tops off and let their true natural talents swing freely. Oh, well. (The personal physical preference of whoever chose the female cast — one assumes the director himself — is extremely evident in that all the girls have the exact same body type... although we did note that the final girl [Sarah Ann Schultz of Wolvesbayne (2009 / trailer)] is the only blonde and also has a centimeter or two more up top. Thus, in her case we can truly talk of "survival of the tittiest".)

For all their covered physical charms and attractiveness, the gals don't seem to be capable of doing more than frown a lot and recite their lines woodenly and display all the thespian restraint of, dunno, Mantan Mooreland (of King of the Zombies [1941 / full film], Spider Baby [1968 / trailer] and The Young Nurses [1973 / trailer]). Oddly enough, when it comes to thespian abilities, neither Casper Van Dien (of The Tracker [2000]) nor Michael Rooker (of Slither [2006 / trailer] and Henry: Portrait of a Serial Killer [1986 / trailer]), the ostensible name actors in the movie, prove themselves any more capable than the gals. But then, they probably — one hopes — knew what junk they were in and simply couldn't be bothered to try to do a professional job.

Van Dien, at least, is out of the scene rather quickly: for no apparent reason he suddenly steals a truck and crashes it and dies. Seriously. It is an event that, like most of what happens in the movie, makes absolutely no sense in the context of the plot. But then, much like the progression of events in, say, Bride of the Atom (1955 / trailer / full movie) or Plan 9 from Outer Space (1959 / trailer / full film), little of the narrative or events in Skeleton Man seems to follow any sensible logic, with the film instead opting for a dreamy non-logic in which no matter how stupid or crazy anything is, everyone treats it as if it's as normal as taking a pee after drinking a 6-pack.

The result is a film full of laughable high points, too many to list here. We ourselves, however, particularly like the scene in which Skeleton Man shoots a fisherman from behind but hits him in the chest; the fisherman, who was of course fishing from the top of a waterfall, then tumbles down through the air with all the natural stiffness of a mannequin (because the way that the "fisherman's body" twists as it falls indicates that the only thing keeping the upper and lower parts of the mannequin together is the clothing, the scene promptly brings to mind the infamous one in Dr. Butcher M.D.  [1980] in which the fallen body/mannequin loses an arm). We also found the scene in which Skeleton Man takes down a helicopter with a bow and arrow entertaining, though we also think it's time that Joss Wheadon finally admit that he cribbed the idea here for his movie The Avengers [2012 / trailer] in which, as you might remember, Hawkeye (Jeremy Renner) takes down the S.H.I.E.L.D. heli-quarters with a bow and arrow.

This film is, for all those involved, what Billy the Kid vs. Dracula (1966 / trailer) was for John Carradine: the deepest point of their careers, no matter how "nada" their careers might be. Thus, of course, it cannot in any way be denied that Skeleton Man is a terrible film — but nevertheless, we rather enjoyed it and recommend it heartily to anyone who truly likes watching the unbelievably dreadful, the ridiculously amateurish, the downright idiotic, the jaw-droppingly craptastic.
Everyone else should avoid it like the STDs...
* Wikipedia is right on the mark when they point out that the notable special effects of the movie is that "Cottonmouth Joe's horse changes from a tan Arabian to a black Clydesdale during attack sequences."
**They take it all a step further on the back cover by actually lining out the names of the actors involved, followed by the notation "Die Schauspieler möchten unbekannt bleiben" ("The actors want to remain unknown").