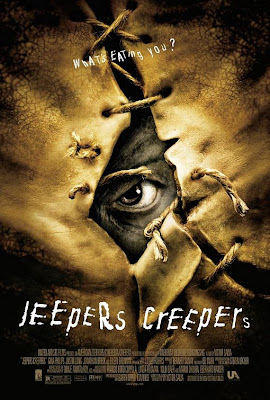 Aside from the yellow press infamy that he gained with the revelation in 1995 that he had regular sexual relations with a twelve-year-old boy in 1988, Victor Salva has also gained a reputation for making effective (?), low budget genre films which tend to follow but stretch the traditional rules and plots. "Atmospheric and macabre, with no happy endings but not to be taken totally seriously" is how Salva himself describes his work, and indeed, his films are sometimes exactly so, though he might have also added a reference to his preference for rural or secluded settings.

His first film, Clownhouse (1988 / trailer), has a few kids alone in a house fighting off crazed clowns; The Nature of the Beast (1995 / trailer) is an enjoyable version of Joe Schmoe with a secret confronted with a psycho hitchhiker; Powder (1995) tells a pretentious tale of the discovery of a strange country boy with supernatural powers who grew up locked in his Dad's basement; and Rites of Passage (1999 / trailer) is a father-sons melodrama cum thriller with a few killers thrown in for good measure. For Jeepers Creepers, Salva decided to tackle the genre of teen horror and came up with an odd, supernatural genre-crossing mixture of Duel (1971 / trailer) and The Hitcher  (1986), peppered with a small homage to the police station scene in The Terminator (1984 / trailer).

Jeepers Creepers proved to be a big success at both the box office and with a few odd critics, though this fact probably has more to say about how easily the public is satisfied than it does have anything to say about the quality of the movie. The fact is, Jeepers Creepers is far from an interesting film and is much more a road-kill of a movie, a dull mishmash, a horror gumbo soup full of bad and good ideas, none of which combine effectively; the final result is simply a generic 1½ hour "horror" movie that gets on your nerves more than it does scare or involve.

The opening scene already lets you know that there isn't even a chance for a gratuitous nude scene, as it is quickly revealed that Darry (Justin Long of Drag Me to Hell [2009 / trailer]) and Trish (Gina Philips of Dead & Breakfast [2004] and The Sick House [2008]) are siblings on their way home to visit their Mom. The introductory dialogue has been praised by some misguided souls as being both insightful and intelligent, but in truth it is simply annoying. (Of course, one could say that since the verbal interaction between most siblings tends to be annoying, the dialogue is indeed insightful and, if not intelligent, then at least realistic.)

In any event, while driving the rural, scenic route home — something one learned at the latest not to do since Children of the Corn (1984 / trailer) — they get run off the road by some nutcase in an old truck. Soon after they not only see the big, scary guy dump what looks to be a body wrapped in a bloody white sheet down a drain pipe but also get run off the road by the nutcase a second time. Do they go to the police? Of course not, that would be much too an intelligent thing to do. Instead, as Trish so self-referentially puts it: "You know the bit in the horror movies where someone does something really stupid, and everyone hates him for it? This is it." Not only do they go back, but under the most ridiculous and contrived actions, Darry goes sliding down the pipe into nothing less than hell-on-earth and the movie soon falls apart and we hate him and everyone else for it.

True, the secret "haven" is indeed both macabre and horrific, which should be a great way to segue the movie into the supernatural, but the idiocy leading up to the revelation takes all the effectiveness from the twist. And worse, after the sudden transition into horror, the idiocy doesn't stop. In no short time, Salva resorts to the cheapest of all ideas: the character who has no reason to be in the film other than to tell the stuff needed to keep the plot going. In this case, it's Jezelle Gay (Patricia Belcher), a local Afro-American mamma who "sees things," an ineffective one-note character given an ineffective one-note performance. The rest of the film until its rather abrupt end has everyone running from the Creeper (Jonathan Breck of Spiders [2000 / trailer]), a big guy in a rubber suit who has wings and can not only fly, but can crawl along walls like Spider-man, too.

Actually, it is rather a shame that Jeepers Creepers is such a lousy film, for the basic idea is solid: what seems to be a rural serial killer turns out to be an unstoppable beast from hell. Regrettably, Salva, who likes to both write and direct his movies, is much too sloppy a scriptwriter this time around to carry the idea through effectively. An unstoppable, flying demon that drives around in an old truck? A monster whose demonic actions are always foreboded by the 1938 tune of Jeepers Creepers? (What did it do before the song was written, we wonder — or, for that matter, before radios were invented?) And how the hell did it collect all those dead bodies if it only appears for 23 days every 23 years? OK, true: since 1938 he would have had two "harvests" — but in all those years, no other idiot ever discovered his easily accessed underground haven?

(The whole idea of it appearing every 23 years is quickly forgotten anyway, for it conflicts much too much with too many aspects of the story. In fact, it is such an albatross one wonders why it was brought up in the first place.) For that matter, how can everyone act so normal at the end of the film, as if cop-killing flying demons that lay waste to police stations and kidnap college students are part of everyday life? (Where the fuck is Hard Copy and 60 Minutes — or at least Fox News and the National Enquirer?)

Jeepers Creepers — original version of the song by Louis Armstrong, not used in the film:

Hell, the problem with Jeepers Creepers is that unlike effective horror films, it features so many holes in the plot and logic that the viewer is unable to simply let go and go with the flow. Instead of being frightened or kept in suspense by what is happening, one is constantly annoyed that the script once again blatantly demands you to turn off your brain. As a result, the film never becomes even remotely scary after the scene in the demon's lair. That the movie became such a hit is truly beyond comprehension, especially since it lacks any all of the sleaze factors that make most equally illogical trash films so enjoyable.

Oh horrors of all horrors! They made sequel in 2003 (trailer)… and Part III, entitled Jeepers Creepers 3: Cathedral, (trailer) is even on the way — with threats of Parts IV and V even hanging in the air! (Oh well, they surely can't be any worse than part one.)

Starting at 1:12 — the much superior B&W Jeepers Creepers short that inspired Salva's film:
Posted by Abraham at 4:38:00 PM

Most of the points you made in your review are perfectly valid, yet your complacent, gloating, self-satisfied writing, makes it all the harder to be convinced by what you have to say.
Overall, a very good review.

Uh, thank you? Grammar note: the comma after "writing" is unneeded as it is the subject of the verb "makes". But other than that: Overall, a very good comment.