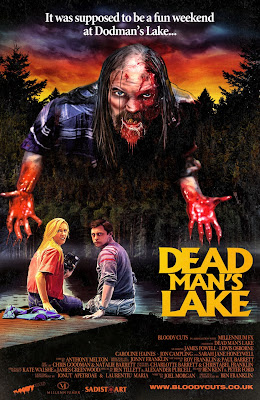 Can you add a new twist to the old dead-teenager chestnut of annoying teens trespassing to camp out next to some distant lake and the terrible fate that awaits them? Ben Franklin, the co-writer and director and producer of this little live action short tries to — and succeeds.
This little bloody and nasty flick is the sixth in an on-going series of on-line horror shorts that make up the on-line anthology known as Bloody Cuts. It is being presented here as our Film of the Month for April not because it is the best of the Bloody Cuts shorts — there are others that are just as good or perhaps better — but because it is the first of the excellent horror shorts of the planned 13-episode anthology that we had the pleasure of stumbling upon.
The dry humor present in Dead Man's Lake brings to mind Tucker and Dale vs Evil (2010) but is a tad nastier and, in the end, the laughter sticks a lot more in your throat. Filmed entirely on location, Dead Man's Lake marks the directorial début of Ben Franklin, who (alongside Anthony Melton) usually fills the shoes of producer at Bloody Cuts. We here at A Wasted Life say "Well done, mate!" — but then, we would say that to all the directors of all the shorts we've watched on their website.
Based on an "original story" by Joel Morgan, the gory little tale has a small cast but plenty of violence once the time-worn situation of two horny campers and a redundant third wheel is set. And like so many of the classic slasher flicks that Dead Man's Lake casts its post-modern eye upon, the short is "Based on true events" (this time around, those that supposedly "took place in 1984, in Norfolk, England...").
On hand for the mayhem are Nick the Stud (James Powell of Resurrecting the Street Walker [2009 / trailer]), Grace the Babe (Caroline Haines of Black Tower Temptation [2009 / trailer]), Pete the Annoying Third Wheel (Lewis Osborne), Maya the Tragic (Sarah Jane Honeywell of The Eschatrilogy: Book of the Dead [2012 / trailer]) and, last but not least, Will the Wildman (Jon Campling of Tales of the Supernatural [2013 / trailer], The Zombie King [2013 / German trailer], Zombie Massacre [2012 / trailer] and Penetration Angst [2003 / trailer]).
Posted by Abraham at 3:14:00 PM