"Stop yelling, you're scaring the saplings!!" 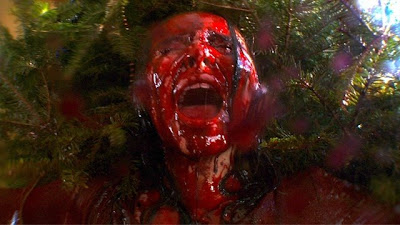 We stumbled upon this short film last January (!) on Kindertrauma, one of our favourite websites, and have waited the whole year with baited breath to have the chance to feature it as our Short Film of the Month during the seasonally appropriate month of December. And to make sure that as many people as possible have the chance to enjoy the film's wonderful sense of the holiday season's spirit, for a change we're presenting the Short Film of the Month at the start of the month instead of the end.
Yes, it is the season to be jolly… but just how jolly? Well, rest assured that the film-makers don't open and close their short masterpiece with the soundtrack of Cannibal Holocaust (1980) — among other Italo-horror soundtracks used during the short — just 'cause it sounds pleasant: it is a warning of what is to come… and, indeed: by the end of the film, Treevenge takes the red out of Santa's suit and splatters it everywhere.
Treevenge comes from the twisted team of Rob Cotterill (producer) and Jason Eisener (director), also known as Yer Dead Productions Inc. The duo gained some attention in 2007 with their faux grindhouse trailer Hobo with a Shotgun — enough attention, in fact, that they got the funding to make the trailer into a real film, which they did last year in 2011 with Hobo with a Shotgun (trailer), starring the great Rutgar Hauer. The concept for Treevenge was conceived while they were working on their faux trailer and filmed while they were writing the script to the real film. Shot with the minimum of financial outlays over a total of ten days on weekends between November 2007 and February 2008, post-production was finished by June that same year. The result is a hilariously bloody, disgusting and tasteless paean to the Christmas Season that holds nothing back, be it tree-fucking or dead babies.
The plot, in short: Trees take revenge for the massacre of their kind in kind. At 15 minutes in length, Treevenge is a perfectly timed revenge tale that uses all the tropes found in horror to first effectively convey the terror felt by the trees during their unprovoked decimation, their growing hate and thirst for revenge as they are shipped away and mocked and denigrated by being decorated, and the uncontrolled anger and hate with which they finally strike back...
Here at A Wasted Life, we proudly present as our Short Film of the Month for December 2012: Rob Cotterill and Jason Eisener's Treevenge. Make sure to share it with your family this Christmas Season!
Posted by Abraham at 10:26:00 AM