Frostbiter: Wrath of the Wendigo (1995 / Michigan) 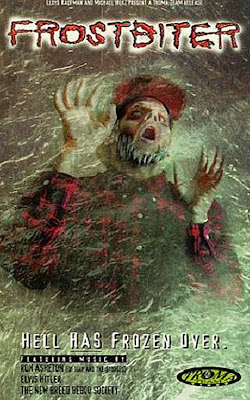 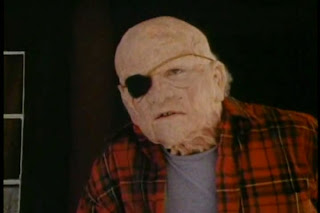 Slowly but surely, up on my DVD shelf at "W", a line of wendigo-themed horror DVDs is growing. Not on purpose, mind you, for the wendigo is not really a creature that makes me think "Hmm, I bet that's gonna be a fucking good horror film." Naw, most of the DVDs came as presents from friends who know my penchant for bad flicks or as the "added attraction" that some eBayers add to the main purchase to help ensure a good review. (Anyone that gives me a free film, no matter how lousy it is, always gets five stars – yes, I am buyable. Makes me think I should have become a politician instead of an over-aged slacker. One day, maybe.) 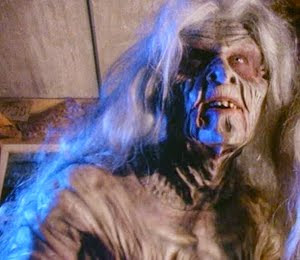 Frostbiter was one such flick, given to me by someone who couldn't get rid of it on eBay, and it has sat a long time on my shelf – my fingers even got dusty taking it down, which makes me think I should shoot my cleaning lady. (But that would mean suicide, and I'm not ready for that yet.) After wiping off the dust, I spied that the DVD was from Troma and after reading the back-cover blurb from the defunct German trash rag Gory News that said "graphic splatter sequences [...] successfully atmospheric", my interests were piqued. All that I can really say now, after having actually watched the film, is that famous quote from the great PT Barnum: "There's a sucker born every minute." Yep, I was born, too. 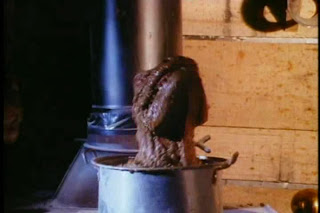 Filmed in 1988, Frostbiter is a non-Troma Troma release – in other words, they didn't make it, but picked it up after it was made, much as they did with Rabid Grannies (1988 / trailer), Combat Shock (1986 / trailer), Chopper Chicks in Zombietown (1991 / trailer) and dozens of other "Troma" films. And thus Frostbiter finally found itself on the lower video store shelves in 1996, already looking ever-so-slightly out of date, brimming with everything that one has come to expect from a Troma film, whether bought or an in-house production: atrocious acting, inane storyline with no continuity, bloody but bad effects, stupid-to-inspired humor (but mostly stupid), shoddy production values, lots of padding, no tension and, as always at least for one scene, unappetizingly saggy breasts. Shot on an estimated budget of $25,000, Frostbiter looks and plays very much as if those involved siphoned off part of the budget for drugs – but regrettably, despite all these flaws that should logically add up to a truly trashy film and a truly good time, Frostbiter is not exactly a joy to watch. There are many a better bad film out there – such as, to list but a few examples, Robot Monster (1953 / trailer), Scream Bloody Murder (2003) or almost any given flick starring Megan Fox or Bela Lugosi. 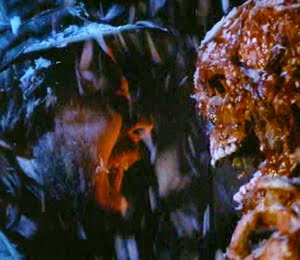 In truth, Frostbiter might have been a mildly entertaining crapfest were it not for a few major mistakes other than the ones listed above that usually make bad films fun and funny. No, the two killer flaws with Frostbiter are that it has one too many un-funny scenes – all the news reports, for example – that come across as obvious padding and forced (and failed) humor and, likewise, the filmmakers literally sabotage their film with their soundtrack. Most of the songs are actually pretty good, but their placement is often wrong and their presence much too long, especially since the songs are often played at a volume so loud as to make the dialog unintelligible. In all likelihood, the drowned-out dialog probably isn't even very good, but that's aside the point: only being able to hear bits and snatches because of a too loud soundtrack sucks hairy balls. 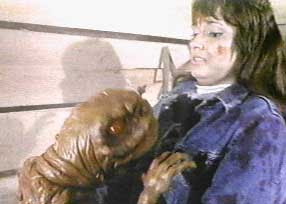 And the plot? Well, it takes place somewhere on one of the two Manitou Islands in Lake Michigan, and though it is never said which, one must assume the north one since it is the one that once had tourist-based deer hunting. In a brief intro voiceover "The Guardian" explains how as a lone hunter he met and defeated the evil wendigo and trapped the spirit within a circle of skulls. Decades later, Ron Asheton, the former guitarist of The Stooges shows up drunk with a redneck friend and shoots the guardian dead, thus releasing the wendigo. (Of Ron Asheton – as " Gary," the asshole who causes the shit to hit the fan – Iggy Pop once said: "I’ve never met a convincing musician that didn't look kind of ill and kind of dirty, and Ron had those two things covered!" He was right, and though Asheton, the only original Stooges band member that never got into heroin, was a crappy actor – he died in January 2009 – he did make a convincing asshole.) The spirit of the Guardian goes and tells a girl named Sandy (Lori Baker) that she is the chosen one and so she hops a plane to Manitou Island, but the pilot loses his head and they crash – luckily enough, on the island. In the meantime, Gary and a bunch of other hunters are now trapped in a cabin as the wendigo begins to terrorize them. The numbers dwindle and everything leads up to a big stop-motion clay figurine final – which is actually the most entertaining aspect of the film, next to the man-eating chili monsters. 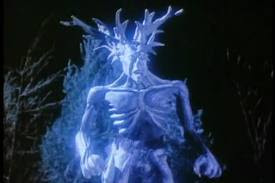 A popular film to compare Frostbiter to seems to be the original Evil Dead (1981 / trailer), primarily because a poster of Evil Dead 2 (1987 / trailer) hangs in the cabin everyone is in, the film thanks Bruce Campbell in its credits, and the flick comes from Michigan. Sorry, but the comparison does serious disservice to the Rami films, which even at their cheesiest reveal directorial talent and a lot of creative energy. True, Frostbiter was made on less than even half the budget of the older low-budget classic, but it hardly even shows any technical finesse let alone creative promise. But as said before, such a lack of anything resembling filmic capabilities can result in an entertaining film, something that Frostbiter sometimes even approaches being – had it only not pumped up the fucking volume of its soundtrack. It seriously ruins what might have been a good – or at least decently passable – bad-film experience.

The attack of the chili monsters in Frostbiter: