Short Film: Paris by Night of the Living Dead (France, 2009)

Paris by Night of the Living Dead
Hochgeladen von blankytwo. - Sieh vorgestellte Filme und komplette TV Shows an.
This short little flick – it's a bit less than 10 minutes long – seems to be of the "love it" or "hate it" variety. Well, we here at A Wasted Life definitely fall into the former category.

Paris by Night of the Living Dead is a comedy, OK? A persiflage, a burlesque – so it has no reason to truly follow all zombie-film rules (it doesn't) or be in any way rational (it isn't). But for that, it is liberally glazed with a wonderfully French visual aesthetic and has blood and guts and bullets galore – and never takes itself too seriously, even as it makes a statement about love and sacrifice. The version presented here is French with Spanish subtitles, but you don't need to understand either to understand or enjoy this gore-laden spectacle. True, maybe some of the CGI is a bit sloppy, but for that the gore keeps exploding everywhere… 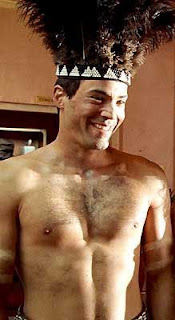 As of yet, director Grégory Morinhas has only made short films, but he seems to have enough visual verve to something bigger. The hot babe bride of the film, played by Karina Testa,* has been seen in the recent French shockers Shadow (2009 / trailer) and Frontier(s) (2007 / trailer), the latter which also sees the hot dude groom of Paris by Night of the Living Dead, David Saracino,* in a part as a bleached blonde. If the priest (Dominique Bettenfeld) looks familiar, it cause he's been seen in such fab films as Delicatessen (1991 / trailer), The City of Lost Children (1995 / trailer) and Amélie (2001 / trailer), as well as the visually intriguing turkey Dante 01 (2008 / trailer). (Amélie, by the way, makes one of the guest appearances in this short.) Scriptwriter David Neiss goes for the fun and blood and doesn't let anything like realism or logic stand in his way – yep, it's a fun film!
Enjoy… Paris by Night of the Living Dead!
*Neither image of the stars used here are from Paris by Night of the Living Dead. I have no idea which films they come from.
Posted by Abraham at 3:21:00 PM