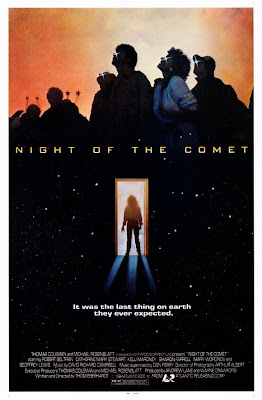 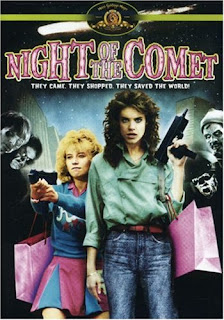 Night of the Comet is the second film of Thom Eberhardt, released a year after he made his debut in 1983 with the horror film Sole Survivor (trailer), an early take on the basic idea of Final Destination (2000 / trailer) and its never-ending sequels. Over the years, Night of the Comet has gained a highly vocal cult following, and enjoys great popularity; not only has it made many a "Best of" lists — including Bloody Disgusting's Top 10 Doomsday Horror Films in 2009 "for its 80s-era cheese factor" — but it also enjoys a full fan-run website all of its own. But all its popularity and good word of mouth aside, is the film any good? That would depend, really, on whether the concept of an end-of-the-world movie made by John Hughes sounds appealing to you, for that is the impression that the film conveys.

"Since before recorded time, it had swung through the universe in an elliptical orbit so large that its very existence remained a secret of time and space. But now, in the last few years of the twentieth-century, the visitor was returning. The citizens of Earth would get an extra Christmas present this year, as their planet orbited through the tail of the comet. Scientists predicted a light show of stellar proportions. Something not seen on Earth for 65 million years. Indeed, not since the time that the dinosaurs disappeared, virtually overnight."
Introductory voiceover 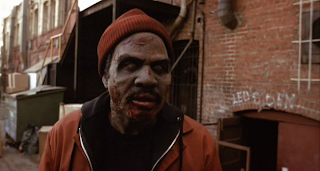 The just-quoted intro voiceover sets the basic situation, and when the comet flies by a few days before Christmas its corrosive dust basically dissolves everyone except for a few select lucky ones that happened to be inside and out of sight behind steel walls. That includes our heroines Regina (Catherine Mary Stewart) and her boy-toy Larry (Michael Bowen), who were busy playing bunny hop in the projection booth of the movie theatre El Rey; Regina's sister Samantha (Kelli Maroney), who took refuge in a steel shed after being decked by her stepmother; Hector (Robert Belran), who was busy singing a duet in the back of his truck; and an underground think-tank full of scientists (including Mary Woronov as Audrey and Geoffrey Lewis as Carter), who knew what the comet would bring. Larry becomes zombie-food toot de suite, but Regina goes home to find Samantha and eventually they run into Hector. Hector splits for San Diego to find out what has happened to his mother, but only runs into a zombie kid there. 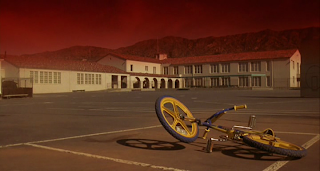 To lift their spirits, Regina and Samantha go to the mall and dance to Cyndi Lauper, and almost get killed by a group of zombified stock boys before being "saved" by the scientists of the think tank... as of this point, to tell anything more would require major spoilers, so for the sake of those who want to see the film, the plot description ends here, except to say all's well that ends well. (Those who want the full story, go here at Wikipedia.)

"You were born with an asshole, Doris, you don't need Chuck."
Samantha Belmont 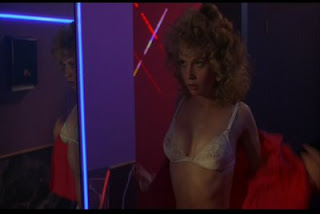 To its advantage, Night of the Comet does definitely have a high "80s-era cheese factor", complete with big hair, bad clothes, lousy synth score, and typically pappy pop songs. Also to the advantage of the film, much of the dialog is both inspired and still funny, more than one scene is pleasant to watch, and one scene even manages to shock by totally going against all expectations. But anyone popping this thing into the DVD expecting a violent slice of 80s exploitation is going to be in for a sore surprise: rated PG when originally released, the violence and blood of the film is extremely limited even for a PG film of the time, and the closest it gets to showing skin is a short bra & panties scene (pictured here). 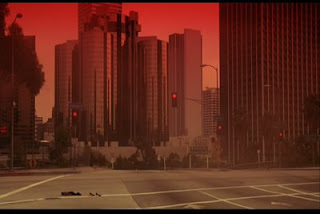 Night of the Comet may be an end of the world zombie flick in theory, but the core focus is much more on comedy and romance at the end-of-days. The zombie aspect is so lite and casually peripheral that it almost seems added as an afterthought and could have easily been jettisoned. The six or seven that pop up do look rather zombie-like, but they are less brain-dead undead than simple mutated humans; what is perhaps the most bothersome aspect of the whole zombie thing is that the film never clarifies why the good characters don't also mutate into zombies when everyone else seems to do so. 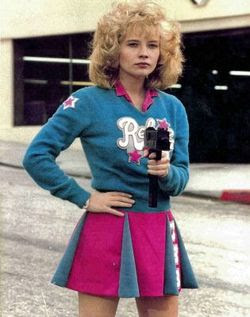 But don't let a major dramaturgical flaw like that ruin your enjoyment of the film for what it is: a pleasant little piece of end-of-days sci-fi fluff about two valley girls who wake up one day to find all of humanity (or at least most of it) gone. To that, the use of filters to show an environment ruined by comet dust is rather effective visually, and some of the scenes of empty streets and locations are frightening in a subtle way. The major plot twist is not only unexpected but actually works, but it is a shame that the "big" final showdown is so unexciting and lame. The final scene fits nicely to the overall humor of the film, ending Night of the Comet on a properly sweet note. 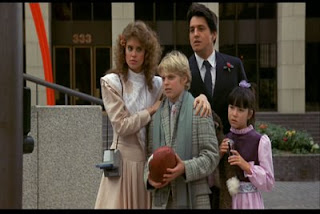 Final verdict: A sweet and fun little film, Night of the Comet has its flaws and totally fails as a straight horror film – which it was never intended to be. As a horror comedy, it definitely works best as the latter. It is, in the end, a pleasant little film that flits by painlessly and can easily be shared with younger, impressionable individuals if you ever get stuck babysitting.
Posted by Abraham at 5:23:00 PM