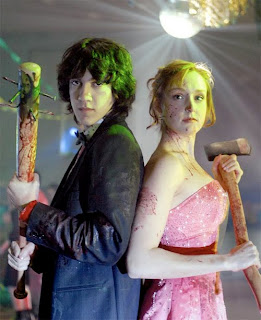 Now this is something new! Imagine, a horror comedy about high-school kids facing off a massive attack of zombies on the night of their prom – starring REAL teenagers! Wow – who would have ever thought it would work as well as it does! How well does it work? Well, hands down Dance of the Dead is the best teen horror comedy since Idle Hands (1999) or the underrated, hilarious but also somewhat repetitive splatter-fest Cabin Fever II: Spring Fever (2009) – neither of which featured real teens, but both of which climaxed during a school dance (the latter even at the prom). And if Dance of the Dead doesn't pour out the red stuff as extremely as Cabin Fever II, it does feature much more plot variance and character development and manages to surprise with innovative or witty twists right up to the final scene – sort of like Idle Hands did, but much more sweetly. 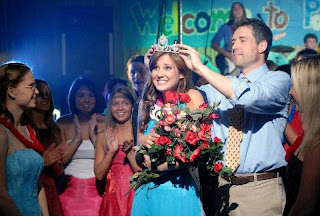 Joe Ballarini's script to the low budget Dance of the Dead – the second feature-length film of director Gregg Bishop, a 1999 USC graduate whose entertaining 2006 debut film The Other Side (2006 / trailer) suddenly comes across remarkably unpolished in comparison – supposedly had been sitting on the back cooker since the 1990s. Once it finally got to the cooking point, it was filmed in Georgia with a cast consisting roughly 80 percent of locals – and though they might come across as real locals, none come across as unprofessional. Not one of the cast is poorly cast and all of them manage their parts with commendable aplomb and good timing; the result is a lot of laughs between the gore and a variety of characters that get on the right side of the viewing audience. True, the script does evidence a plot hole or two, but the action and humour are so consistent that the odd implausibility or overlooked detail is easy to ignore or simply never notice.


"But I don't know how to shoot a machete."
Gwen (Carissa Capobianco) 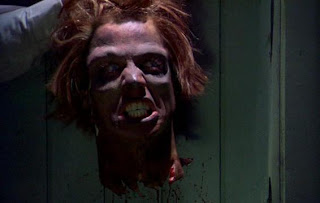 The overall tone of Dance of the Dead is already clearly established in the pre-credit sequence in a graveyard with a dead-pan gravedigger (James Jarrett) that brings both The Adams Family (1991 / trailer) and Dellamorte Dellamore (1994 / trailer) briefly to mind even as it instigates chuckles. From there, it's off to the local high school, which is in the midst of preparing its "Hawaiian Hula Prom", to introduce the various outsiders and nerds and stoners and two odd non-nerd girls that end up forming the group that must join together to (initially) survive and (eventually) kick some zombie ass with the help of a weapons-fanatic gym teacher. 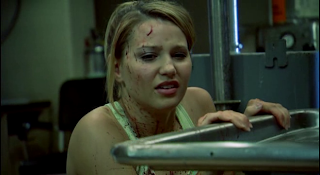 Come prom night, Jimmy the Pizza Boy (Jared Kusnitz of Doll Graveyard [2005 / trailer] and Otis [2008 / trailer]), is dateless, his suddenly ex-girlfriend Lindsey (Greyson Chadwick of Buried Alive [2007 / trailer]) now reluctantly making out with the school student council president in the local graveyard just as the zombies literally begin flying out of their graves. Before long – along with a variety of class nerds, Gwen the cheerleader (Carissa Capobianco) and Kyle the redneck (Justin Welborn of The Signal [2007 / trailer]) – Jimmy and Lindsey find themselves taking refuge in a mortuary as the zombie plague spreads across town lickity-split. Their numbers dwindling, they meet up with and get armed by their school coach Keel (Mark Oliver of Camp Sleepaway III: Teenage Wasteland [1989 / trailer]) and then team up with the three stoners of a local band The Quarter Punks to go save all their friends at the prom. Needless to say, they arrive a little late... 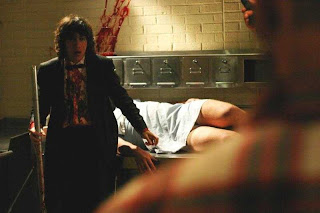 There are a number of truly standout scenes between the plethora of laughs and buckets of blood that flit across the screen during the extremely quick and lean 87 minutes of the movie, the best being the previously mentioned flying-from-the-grave zombies, a truly memorable make-out scene and an oddly romantic slow dance at the prom. Many of the jokes – not all of which are gore or horror-based – happen almost in passing, and by the time you begin laughing you already need to catch up with the next one, but for all the humour the old-fashioned, non-CGI blood and bodycount is not at all ignored or slighted. Dance of the Dead achieves a truly fine balance of the two and, ably assisted by an obviously keen and likable cast, the filmmakers deliver a perfect midnight movie.
Posted by Abraham at 6:51:00 PM