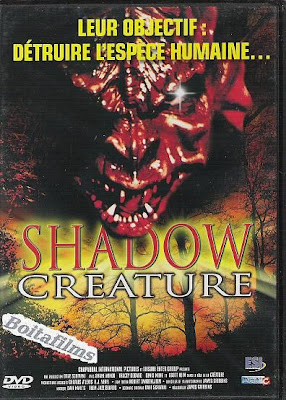 Shadow Creature is the only film to date of James P. Gribbons, a successful cinematographer for commercials and documentaries. And indeed, the cinematography of the film, as bad as the film itself often is, is the most professional aspect of the entire project. 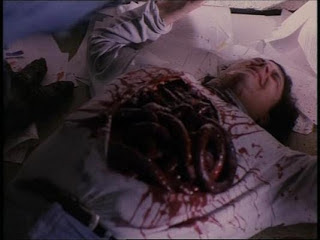 Dt. Brighten (Shane Minor, former Mr USA and Playgirl July 1994 centerfold, seen pumping his muscles for the magazine further below) is put in charge of finding out who is behind a series of brutal murders in Cleveland, Ohio. The victims have all been ripped apart, half-eaten, and covered with slime. The clues lead him to the loopy Prof. Melvin (Dennis Keefe), who lost his wife and daughter in a car accident some time before. Prof. Melvin owes the mayor (Anthony Chrysostom) – who also happens to be a local gangster with a god-complex – bookoo bucks because he has failed at creating a hair-rejuvenation lotion made from zebra mussels. Little does anyone know that the now-mutant mussels can cause people to mutate into flesh-eating, rubber-suit lizards in clothing, and that one such rubber suit (Scott Heim) is responsible for the murders. How does Jenny (Tracy Godard), Prof. Melvin's hot blonde and mini-skirted assistant fit in all this? Can the rubber suit be stopped before he rips off more heads – including those of Brighten, Jenny and Prof. Melvin? 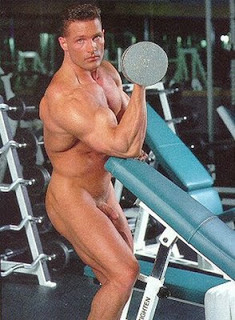 Filmed in Buffalo, NY, for some odd reason Shadow Creature is set in Cleveland – just another odd decision in the screenplay supplied by Chris Wojnicz and Jason Wolthuizen (the latter who also supplied the "script" to the 1997 horror home movie Cannibal Rollerbabies [trailer]). The tale, which is credited as being based on the "true story" of the "Flesh Eating Cannibal Creatures from Cleveland" (hardy-har-har), was supposedly written while Shadow Creature was being filmed, and this shows in more way than one – most obviously in the non-sequitur verbal exchanges and plot developments (it is easy to imagine Shadow Creature as the final product of script produced by an undead, drunken Harold Pinter on acid). The film seems to enjoy a level of cult popularity in France, where it is a regular at bad film festivals, but then, the French have long been known to appreciate things that fly way below the radar of the average non-French Joe. 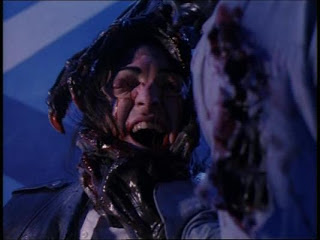 OK, the film does have some nice gore. That said, purveyors of true retinal torture are in for a treat with Shadow Creature. The film is very much in the tradition of John Landis’s overrated Schlock (1973 / trailer) in that it aims to be bad on purpose because, like in Schlock, it mistakes being obviously bad on purpose as being funny. The final result is that, like Schlock, Shadow Creature it is actually pretty bad – but unlike Schlock, it is truly so fucking bad that it almost does become funny. It is a film that comes close to that which makes the best of the Ed Wood and William "One-Shot" Beaudine films so enjoyable: a total, utter incompetence on every level – from script to direction, from acting to editing – that somehow coalesces to achieve a mind-boggling, utterly surreal unwordliness. Unlike Ed Wood films, as mentioned before, the dialog and plot and events are intentionally ridiculous in the hope of being funny, but in this sense the film fails so tremendously at being funny that the level of its un-funniness actually becomes funny. (Follow that?) 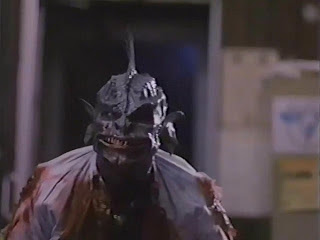 And thus, Shadow Creature indeed seems to somehow almost gain that ungodly something, that unexplainable special something that transcends the total ineptitude it so flagrantly bathes in to become almost enjoyable. (The emphasis here, however, is on "almost".) Give the film another 15 years (the French obviously simply don't want to wait that long) and in all probability Shadow Creature will achieve that special patina that makes movies like those of Ed Wood so enjoyable, so much fun – indeed, the film's wardrobe already has that patina. In 15 years, Shadow Creature could well be rediscovered and hailed an equal to at least one Ed Wood film, his least successful one – or most successful, depending on how you see it – Jail Bait (1954 / trailer). Why Jail Bait? Well, both are detective films, for one, and both feature wooden weightlifter leads who display their naked, shaven chests… 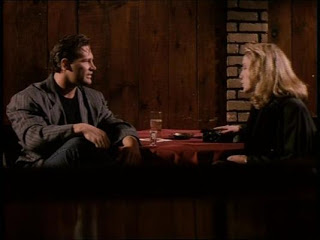 In any event, give Shadow Creature at least another 15 years before you check it out – and if you don't, don't say you weren't warned.
Posted by Abraham at 6:06:00 PM