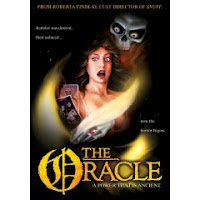 The Oracle is one of those funny type of lousy films that are actually a waste of time to watch but sort of have an entertaining quality to them which keeps the viewer there until the last credits roll, whereupon (s)he can only wonder "Why did I watch that to the end?" For the blood and guts, naturally, cause the story sure ain't much. In truth, in this case it is the story of the filmmaker that is much more interesting than the actual film, but we'll get to that later.
Set in New York, The Oracle is a sleazy horror film that makes due with cheap effects like a throbbing green light, big rubber demon hands, a plastic flying skull, wind machines, little fake looking oozing parasites and tons spurting blood. The film opens with typically ominous music playing in the background as we are introduced to an ugly old hag living in an apartment in a big scary co-op who is using a cheap, silly looking ceramic hand with a quill feather pen — the oracle of the title —

to talk with the dead. "Murder" it spells out and "Murder" she rasps into the camera and that is the last we see of her for the rest of the film, for she mysteriously disappears. Jenny (Caroline Capers Powers) and Ray, a young couple with a less than functional marriage, move into the apartment. Jenny is given the oracle by Papas, the Greek superintendent, and before Jenny the Housewife knows what is happening, she's getting letters from a dead business man. (This part of the narration is a bit slow, so Findlay pumps it up a bit by introducing one of the film's "heavies," Farkus (Pam La Testa), a fat slob of a woman dressed as a man who likes to kill so much that just for the fun of it she rents a 42nd Street hooker and knifes her to death in the hotel. Farkus is incidentally also one of the killers of the businessman.) No one believes Jenny, so she goes to the businessman's wife, not knowing that it was she who had her husband killed. Now Jenny is not only being terrorized by the supernatural, but has some nasty killers on her heels as well; she ends up sedated in a nut house where an attempt to kill her is foiled by the skull of the ghost bursting through a window, causing all the glass to multiply impale the killer. (Somewhere along the way, the ghost also kills all the disbelieving people that try to destroy the oracle. Papas stabs himself to death, asshole hubby Ray gets his head ripped off by big demon hands, the shrink bites the dust in the elevator.) Awoken by the death screams of her would be killer, Jenny jogs out of the nut house in her hospital gown, straight into the arms of the Nasty Wife and Farkus, who take her back to the factory to kill her. Following an hilarious chase scene in which an out-of-breath ax-wielding Farkus plays hide and seek with Jenny, Farkus smashes the ax into a vat of acid and melts bloodily to death. Jenny drives off in the car that was used to bring her there, so Nasty Wife gets into the old model vehicle stored there (the car also used is the staged "suicide" gassing of her husband), hot to follow. 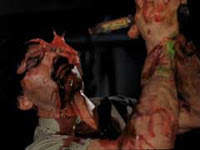 Only the ghost of the Angry Husband, in the form of a laughable skeleton with parched skin wearing a business suit, appears and kills her the same way he was killed. The last scene is back in Jenny's apartment, now decorated just like it was when the Old Hag lived there, the newly single Jenny not swinging but rather decked out just like a younger version of the original owner of the oracle. (The creation of Jenny the Young Hag?)
Wow. Scary stuff, no? Of course, The Oracle makes no sense really. Explained at one point as a tool of Good Witches, the thing kills a lot of innocent people for no reason other than that they don't believe in it. Likewise, powerful enough to physically rip of heads, send glass shards flying through the air like missiles or cause killer hallucinations, the oracle actually has no reason to involve Jenny in its actions. Furthermore, if the dead businessman and the oracle are more or less the same thing, who or what was the oracle before the business man got murdered? But then, one doesn't watch movies like The Oracle for their logic. One watches a film like The Oracle because one is a trash junkie who misses the films that once populated the skid row theaters of the US: this film, like all of Findlay's films, is a perfect example of the grindhouse debris that used to be shown on 42nd Street and other similar halloed locations.

Director Roberta Findlay, who has seemingly dropped out of the business, had a long history in the realm of exploitation films, She started her career in the mid-sixties alongside of her husband, Michael Findlay, who was decapitated by a helicopter in NYC in 1977. The couple specialized in sleazy films full of sex and violence, working both in front and behind the camera, she as Anna Riva and he as either Julian Marsh or Robert West. Amongst the more interesting names to have worked with them are Betty Page in Body of A Female (1964) and Yoko Ono in Satan's Bed (aka Judas City) in 1965, the latter a film probably no longer listed on the Great Dead Rock Star's Wife's resume. Following Touch of Her Flesh, Curse of Her Flesh and Kiss of Her Flesh, their legendary trilogy from the late sixties narrating the exploits of the misogynist woman killer Richard Jennings, they went on to make such well remembered films as 1970's Janie, featuring the tag line "Her Lovers went from bed...to dead," and the 1974 five-finger visual aid Eager Fingers, Eager Lips featuring the legendary Jamie Gillis as Dr. Charles Cherrypopper. Roberta went on to make many a willy wanking or exploitative masterpiece after the couple divorced around 1974, but the most resonating and influential film they made together was probably a piece of celluloid shit filmed in South America as Slaughter in 1974. Originally shelved as unreleasable, Alan Shackleton of Monarch Releasing added some new footage to the filmatic fiasco and released it onto the gullible public as Snuff.
Posted by Abraham at 3:51:00 PM