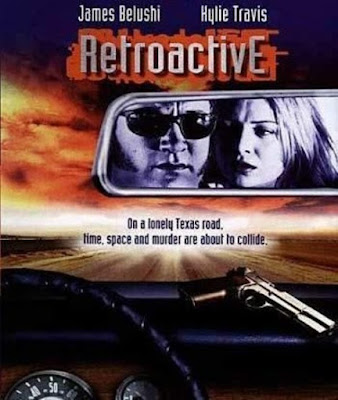 (Spoilers) This tasty little film can easily be described as Groundhog Day (1993) from hell. Morneau, who has displayed no exceptional talent in many of his films — which include Final Judgment (1992 / full movie), Carnosaur 2 (1995 / trailer), Bats (1999 / trailer) and Hitcher II: I've Been Waiting For You (2003 / trailer) — has managed to deliver an exciting, engrossing film that keeps one both on the edge of the seat and interested in the events. 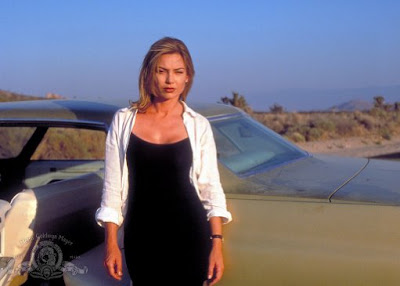 True, the first ten minutes used to set up the time travel concept are less than promising, especially after the film's properly brooding and artsy opening credits sequence, but once Karen (Kylie Travis) meets up with Frank (James Belushi) and Rayanne (Shannon Whirry), things definitely get going. Accepting a lift from the two after her car breaks down on some lonely Texan highway, she lives to regret it repeatedly. James Belushi, whose busy career has gone downhill qualitatively since Salvador (1986 / trailer) and Red Heat (1988 / trailer), is perfectly cast as a psychopathic redneck Texan sporting both Elvis sideburns and his beer-gut. Flipping out when learning of his wife's extramarital activities, he blows Rayanne's brains out and goes after Karen, who barely manages to get away, taking refuge in an underground laboratory where Brian (Frank Whaley, miscast as usual) is conducting time travel experiments for the government.

Whoops! Fuck up at the controls, and she gets sent back twenty minutes and finds herself in the back seat of Frank's car, ready to try to stop the carnage that she knows is ahead. Not only does she fail miserably, but this time the carnage is even worse! The cycle repeats itself again and again, every attempt by Karen to stop the violent chain of events only resulting in more destruction and an ever increasing body count. Much like in Final Destination (2000 / trailer), Death doesn’t seem to take lightly to any attempts to cross his plans, but unlike the supernatural powers at work in that teeny horror bodycount film, the violence in Retroactive is powered (mostly) by redneck stupidity and hormones.

Retroactive delivers much more than either its title or synopsis leads one to expect. Well acted, shot and edited, the ending is even good, offering a semi-downer not normally found in this type of celluloid adventure. Both main babes are a pleasure to look at, even if they do keep their clothes on, and the smaller roles are as excellently cast — as Frank is — and though filmed in California, one never doubts for a moment that this isn't hell in re-play somewhere in Buttfuck, Texas.

Kylie Travis, whose main claim to fame was regular roles in television's Models, Inc and Central Park West, does well as Karen, convincingly developing the inner-strength a person would need to go through all that she does. Shannon Whirry, a b-film specialist who has flit through many an "erotic thriller" is surprisingly likeable and sympathy arousing as the abused wife, even if she is too beautiful for her part. The only weak link in the chain in Retroactive is Frank Whaley, whose baby face hasn't stood out so obviously since Broken Arrow (1996 / trailer). He holds his own a bit better later in the film after he starts getting his hands dirty, but as a scientist specializing in time travel experiments he leaves a lot to be desired. All in all, though, Morneau delivers the goods times four in Retroactive.