Great title. But great titles also hold great promise, and great promise is seldom easy to meet. And in that regard, Aquaslash — scribe and director Renaud Gauthier's sophomore feature film, six years after his feature film directorial debut, the French-language disco slasher Discopathe (2013 / trailer) — is all zirconia instead of diamond, be it in the rough or polished.
Trailer to
Aquaslash:
The well-staged opening scene to the playfully titled film is an obvious homage to the classic slashers of the 80s, where sex equals death, and blood and gore color the screen red: Aquaslash opens with two over-aged "teens", both lifeguards at Wet Valley Water Park, practicing some late-night safe sex high up on the terrace of the water park's waterslide, where they meet an appropriately bloody death at the machete of an unknown assailant, their body parts dropping down to the ground below.

A great start, unluckily also the only true blood and gore for almost the entirety of the rest of the movie, which subsequently consists of non-stop and rather uninteresting foreplay for more than an hour until finally delivering a final scene of massive carnage. Yes, the big final scene is an orgasm of blood and body parts, but truth be told: when it comes to slasher films, the viewer wants more than one big money shot. And one big money shot — an extended money interlude, so to speak  — is pretty much all Aquaslash has to offer after its first, opening spurt of body fluids and parts.

The big flaw of the film becomes obvious seconds after the initial nighttime double murder. The day thereafter sees the arrival of the 2018 graduating class of Valley Hill High School for a weekend celebration steeped in the three Cs — "Courtesy, Control and Consent" — which basically translates, even our woke days, into sex and alcohol and drugs. (Something known as a "party".) The class includes a few token Afro-Canadians and an Asian or two — we might have imagined the latter, actually — but lily-white is the governing color. Way too much of the subsequent running time is spent introducing the would-be future dead and possible survivors, not to mention the diverse red herrings who just might be the killer, as the party and sex shenanigans transpire. 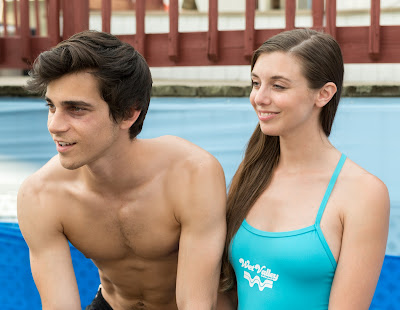 Here, Renaud Gauthier sorely overestimates how interesting the viewer might be in the overdose of figures, most of whom remain as forgettable as their names. He attempts to enliven things a bit with an accident involving a smashed bottle and two drunken jocks as well as the murder of Michael (HoJo Rose of Evil Breed: The Legend of Samhain [2003 / trailer]), the father of the film's nominal hero figure, Josh (Nicolas Fontaine), who in turn is in the midst of rekindling his romance with Kim (Lanisa Dawn), to the anger of her current hot-headed beau, Tommy (Paul Zinno of Happy Face [2018 / trailer]). Kim and Josh, amazingly enough, have a sex scene — there's a quick cut of it in the trailer — and nevertheless survive, though it is shot in a manner that could lead you expect their immediate demise. (Come here, come here, come here – go away, go away, go away.)

At only around 70 minutes in length, Aquaslash, by contemporary standards, is a relatively short film — which makes it all the more amazing that the movie comes across as such a long slog. But red herrings and party "fun" and personal back stories of way too many characters take time to play out, to the detriment of the movie as a whole.

True, once the "Sea Snake" waterslide is sabotaged with an X of razor-sharp blades, some tension does arrive, but that too is weaned and milked way too long. And then, once the over-aged teens finally begin to slide to their death and dismemberment, the repetitiveness of the deaths becomes sorely obvious despite all the nicely shot and flying body parts and blood. It also doesn't help that by the time people start dying, the viewer has been so dulled by boredom that they almost don't care anymore. Okay, one does wake up again as the bodies divvy up and the parts fly and slide down into the swimming pool, but the overall feeling of dissatisfaction remains. To put it simply: too much, too late does not a good or fun film make.

Aquaslash is, as a whole, an extended narrative built around one big scene. And like most one-trick ponies, despite the excesses of the big scene, the movie is quickly forgotten. A final scene does reveal the who and why of the murders, and like most slashers of the Golden Age the motivation is driven by the urge to revenge some long-past event. Why it took 30-odd years for the killer to finally go for the gusto is, as normal for the genre, never explained.

In its final filmic form, Aquaslash is hardly something to search out, as it is far from imperative viewing or even all that interesting, but if you happen to be stuck at home recuperating from COVID or the such, it is better than reruns. On the other hand, you could pull out or stream the real thing, some classic slasher from the past, and enjoy yourself more.

Lastly, as an homage to the slashers of the past, it lacks something that no good bad film of those days ever lacked: naked bouncing boobies — as in the type with cherries on top, not school nerds on a trampoline. Even one set would have greatly improved the movie. As would have one or two more deaths along the way to the big, final squirt. Maybe next time — Renaud Gauthier's next movie, Punta Sinistra (2022 / trailer), is already on the way. It's supposed to have a shorter running time, which is already an improvement.