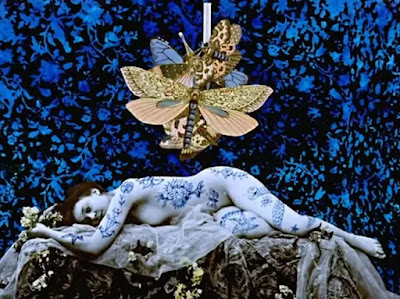 Intentions can change. For a long time, we had been planning to present an intriguing and entertaining and drily humorous short animated film from 1965 entitled Rhinoceros (full short) as our Short Film of the Month. But when we began our research about the man who made that short, the Polish renaissance man Jan Lenica (4 Jan 1928 – 5 Oct 2001), we suddenly found out that Rhinoceros was just one of many great shorts that the incredibly talented man had made... And that as great as Rhinoceros might be, there were other projects in his oeuvre that appealed to us even more. Like this little film here, Labyrinth, which we really have no problem labeling a masterpiece.
Jan Lenica's
Labyrinth:
A view shared by others, it would seem: over at the website Culture.Pl — an easy website to get lost at for hours if you have any interest in art, literature, film and culture in general, and one which has led us to more future Short Films of the Month — they have the Labyrinth on their list of 20 Masterpiece Animated Shorts from Poland. There, they write: "This film represents the philosophical and reflective strand of Polish animation. Its fans observed the world around them reflected in the fate of the ordinary, grey man and looked for philosophical generalisations. Labyrinth shows Jan Lenica's gallows humour and surrealist ideas. Lenica was a major influence on Roman Polański and many others." 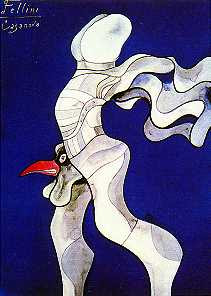 Lenica's poster to
Fellini's Casanova (1976 / trailer).
Among others, the film is an obvious and major influence on the classic animated shorts of Terry Gilliam, which blew so many of us away back when we caught Monty Python's Flying Circus (1969 – 74) for the first time. 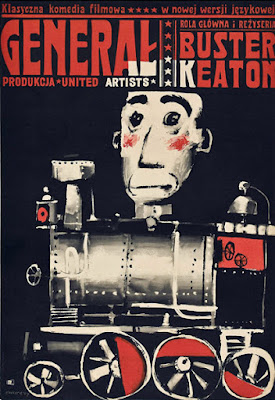 Lenica's poster to
Buster Keaton's The General (1927 / full film).
Like so many contemporary Europeans of Pop culture, and especially those of the former Eastern Bloc, Jan Lenica is hardly a familiar name to the English-speaking world. Born is the city of Poznan, Jan Lenica was the son of musician and painter Alfred Lenica. (As typical of our patriarchal world, we were unable to find out his mother's name.) An eventual graduate of Warsaw Polytechnic in 1952, he had already begun publishing illustrations in 1945. By 1954,  he was the Assistant at the Chair of Poster of the Warsaw Academy of Fine Arts. (A meteoric rise, to say the least.) In 1957, he made his first animated films, Strip Tease & Once There Was... & Banner of Youth, all collaborations with the possibly more [in]famous Walerian Borowczyk (21 Oct 1923 – 3 Feb 2006), who went on to give the world Immoral Tales (1973 / trailer) and The Beast (1975 / trailer), among other contentious works. The films he and Borowczyk made are considered the first animated shorts of Poland that removed the genre from that of kiddy films, and proving that it was capable of addressing adult themes and offering serious messages. One of the great masters of Polish poster art, his posters (a few of which are included here) often straddle a fence post between commercial arts and fine arts, and if they don't always reveal that much about the project they "advertise", they nevertheless mesmerize. A world traveler, he lived in Paris, lectured at Harvard, taught in Kassal and Berlin, and forever remained a creative force — or at least he did until he died in Berlin on 5 Oct 2001. 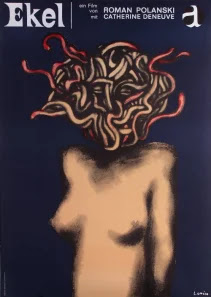 Lenica's poster to
Polanski's Repulsion (1965 / trailer).
"This 15-minute short has no dialogue but it doesn't need any as its intentions are pretty clear. The totalitarian state crushes individuality and brainwashes away independent thought; people are coerced in, slowly altered, infect others and then become a black, swarming, easily controlled and manipulated mass intent on stamping out dissenters. This achieves a nightmarish and oppressive quality and its mix of hand-drawn backdrops, selective use of color, traditional animation and cut-out animation [...] is both visually striking and creates the perfect, cold urban (almost bordering on steampunk) look for this particular piece. This is the type of surrealism [...] where the message is neither blatantly shoved down one's throat nor impenetrably obfuscated through overly-arty flourishes or pretension. [Bloody Pit of Horror]"
"Along with Jiří Trnka's Ruka (The Hand, 1965 [full film]), Labirynt is considered to be one of the finest political animations ever made. [Videosift]"
Posted by Abraham at 10:32:00 PM