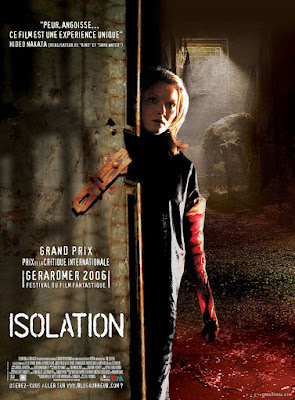 An obscure and unknown (assumedly outside of Ireland that is) direct-to-DVD science cum nature-gone-wrong film that truly deserves a wider audience than it has, and not just for being an early and almost showcase role for Ruth Negga, the Ethiopian-born Ireland-raised beauty who proved herself a thespian talent of special note in that great over-the-top TV series that was/is Preacher (2016-19 / trailers: Season 1 & Season 2 & Season 3 & Season 4)... though some — those who don't read blogs like this — would probably list her Oscar-nominated performance in Loving (2016 / trailer) as the real proof of the pudding. (Or, more recently, her performance in Netfux's excellent Passing [1921 / trailer].)

Here, in Isolation, she plays the final girl in what is one dank, intense and suspenseful and ultimately highly depressing, blood-spattered horror film about, well, unbelievably enough, parasitical killer mutated cow embryos. Bovine babies never looked anything like this before... 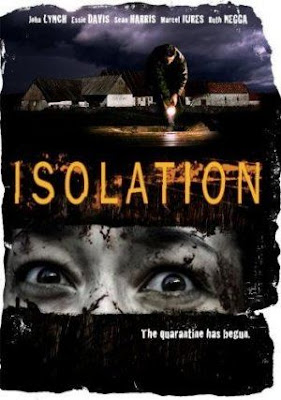 Trailer to
Isolation:
The movie is the first full-length directorial effort of Irishman Billy O'Brien, who proved his mettle with a selection of short films and, after Isolation, has since gone on to a variety of other criminally under-appreciated movies ranging from trashy (Ferocious Planet [2011 / trailer]) to the genre-bending Scintilla (2014 / trailer) to the oddly disturbing I Am Not a Serial Killer (2016 / trailer). Why this guy doesn't have a booming career is unexplainable to us, for he knows how to make a good movie as much as he knows how to turn shit into alpaca (see: Ferocious Planet).

Isolation is anything but alpaca: it's a movie that sometimes unnerves you, often keeps on the edge of your seat, and keeps you interested until the end. Okay, the core concept of the narrative — somewhat unethical scientific experiments in an obscure location go wrong, people die — ain't new, but O'Brien takes his tried and true ingredients and does a lot with them, ably assisted by a small but tight cast who all, just like Negga, do a damn good job at making their somewhat sketchy characters believable people with distinct personalities.

In desperation to keep his grimy, rundown, rural farm, Dan (John Lynch, a familiar face from Hardware [1990 / trailer] & Black Death [2010 / trailer]) agrees to hosting some secret experiments involving cow foeti. Complications arise, and Orla (Essie Davis of The Babadook [2014 / trailer]) the vet in charge — one can only wonder how often she prepared for the arm up the cow vagina scene, which was truly a new sight for us — wants to abort the project, but of course John (Marcel Lures), the obviously shifty chief scientist of Bovine Genetics Tech, says no. Mary (Negga) and Jamie (Sean Harris of Creep [2004 / trailer], Possum [2018 / trailer] & The Banishing [2020 / trailer]), two travelers parked in a tattered trailer outside the farm, get pulled into the mess when the cow birth starts to get messy and, well, things go downhill from there and get a lot messier, not to mention bloodier.

Okay, we have our doubts that bovine breach births are conducted the way Dan and Jamie end up doing it, or that one gets a stillborn calf to breath in the manner that Dan does, but those are rare, blackly funny scenes in a bleak and grimy film that holds more than one surprise, a lot of cow shit, and some truly horrific and tensely suspenseful moments. (And really: how many movies have you seen that don't shy away from showing a vet bury their arm deep in a cow vagina? That alone makes the movie worth a gander.)

One might be hard pressed to say that the characters always react in a logical or intelligent manner — there's a hilariously disgusting scene involving a tractor that one does not need to be a farmer to know it ain't gonna work — but  for that this claustrophobic and grim slice of nature gone bad (thanks, once again, to man's capitalism-driven intervention) is a movie that keeps your eyes glued to the screen, despite an unnoticeably slow build-up to the actual blood and guts and farmyard violence and death and final, depressingly touching (if inevitably logical) closing scene. 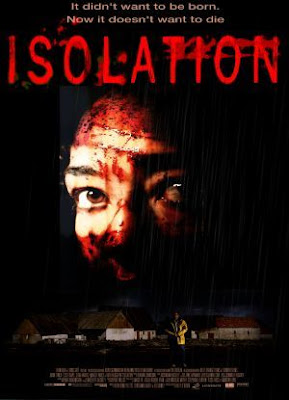 Isolation is a movie that deserves discovery. Give it a go. And someone, please: give Billy O'Brien another directorial job. The man is talented: he has a good eye and knows how to hide a low budget and get convincing performances from his entire cast.
Used in the movie: Jim Ford —
I'm Going to Make Her Love Me:
Posted by Abraham at 9:38:00 AM