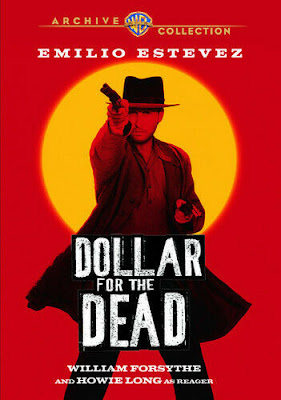 A.k.a. Django — Ein Dollar für den Tod. In Europe, or at least in the German-speaking regions in which our DVD was marketed, this forgotten Western had the name "Django" added to the relatively literal translation ["Ein Dollar für den Tod"] of its English title, Dollar for the Dead, thus relegating the movie amongst the untold number of mostly third- and second-rate [Spaghetti] Westerns which, in the wake of Sergio Corbucci's original classic Django (1966), had that character's name added to a title not because the original character was part of the film but simply to add some marketability.* In that sense, they might as well chosen "Sartana" — behind Django, perhaps the second most popular name in Europe to always added to Westerns — were it not that Dollar for the Dead has one salient feature that ties it better to Cobucci's classic: for much of the film, a singular coffin is carried in tow from which, during the big climactic shootout, a machine gun is pulled. (As unexpected as that was in 1966, it's almost a genre cliché by now.)
* Adding Django to German titles is still a thing today: as late as 2010, a German-language DVD release of less than impressive zombie western The Dead and the Damned was given the title Django vs Zombies.

Trailer to
Dollar for the Dead:
Dollar for the Dead, needless to say, is not a Django film: the main character, Cowboy (Emilio Estevez), is more of the Man-with-No-Name school, though he never truly comes across quite as grizzled or as cool. And though shot in Spain and with at least one genre vet listed amidst the producers,* and though heralded as an homage to the great Spaghetti Westerns of Leone and Co., the movie very much feels and looks like what it above all else is: a TV movie. For, though shot amidst landscapes and vistas and skies of grandeur, the shots lack the breadth and scope of the classics; and though the sets and locations and costumes and stock characters often call to mind the film bolognaise of yore, they almost universally lack the grime or poetry or operatic. (Back in 1998, they simply still did not yet know how to take the TV out the TV production — though Dollar for the Dead gets pretty close to doing so pretty often.)
* Two names, basically. West Virginian Tony Anthony, nee Tony Roger Pettito, of the quadrilogy of successful but generally overlooked nameless-man films A Stranger in Town (1967 / trailer), The Stranger Returns (1967 / trailer), The Silent Stranger (1968 / trailer) and Get Mean (1975 / trailer), the odd Zatoichi-inspired Blindman (1971 / trailer), and the 3-D classic Comin' at Ya! (1981 / trailer). (The last of which, by the way, was the scriptwriting and thespian debut of this film's director and scriptwriter Gene Quintano.) The second name is that of the real Spaniard Enrique Cerezo, whose name is found in the credits of films ranging from the non-western genre-bender Witching and Bitching (2013 / trailer) to Suny and Jed (1972 / trailer) and China 9, Liberty 37 (1978 / trailer). 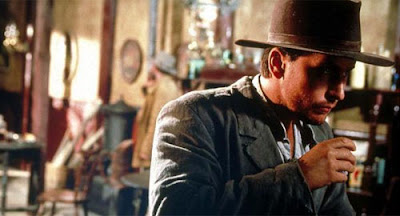 Likewise, the casting is a mixed bag. William Forsythe (of Sharkman [2001] and Larva [2005]) and Jonathan Banks and Joaquim de Almeida (sorta of Survival Island [2002]) and the always excellent Ed Lauter ([30 Oct 1938 – 16 Oct 2013] of The White Buffalo [1977] and The Prometheus Project [2010]) are all almost too perfect for their roles, but regardless of the fact that this is the third Western to feature Emilio Estevez, and regardless of how well he can obviously ride a horse, he lacks everything from a convincing five-o'clock shadow to stature and presence to ever come across as anything but a sadly miscast pretty boy (ditto, to an extent, with Jordi Mollà as the bad guy Federale captain). One is hard put to not say that former professional football player Howie Long (of 3000 Miles to Graceland [2001]) is almost too hunkadelic for the part he plays, but his mass and size and scowl manage to add a threat to his otherwise overwhelmingly DILFy presence. 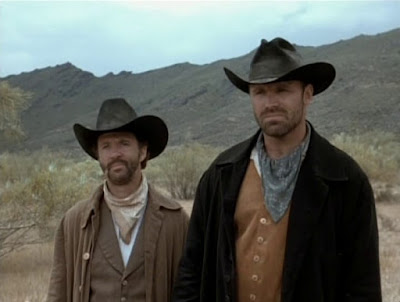 That all said, Dollar for the Dead isn't exactly a terrible film. It is entertainingly ironic and often laconic, and it zooms along at a quick speed. Furthermore, despite the film's genre, much of the action owes less to the traditional or Spaghetti Western than to the unrealistic excesses of the Hong Kong crime and/or wuxia flicks of directors such as John Woo (of The Killer [1989 / trailer]), Ronny Yu (of Freddy vs. Jason [2003], Bride of Chucky [1998] and The Bride with White Hair [1993]) and  Tsui Hark (of A Better Tomorrow III: Love and Death in Saigon [1989], Time and Tide [2000], Seven Swords [2005] and Zu Warriors [2001]), so even if Estevez isn't all that convincing when he's flipping in the air or sliding along the ground shooting his 12-shooters or 24-shooters or 48-shooters (all of which look like 6-shooters), the set pieces remain entertaining excesses. 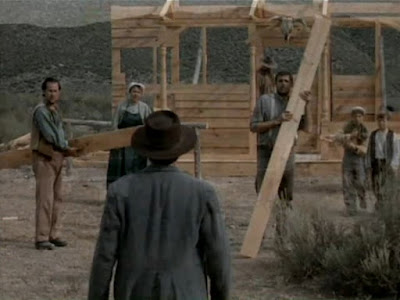 As odd as the amalgamation of genres and styles might sound, it actually works far better than, say, in the somewhat more over-the-top Asian excesses found in Peter Hyams' Hong Kong-influenced and much bigger-budgeted dagger-and-sword flick The Musketeer (2001 / trailer) — the screenplay of which, interestingly enough, was supplied by this film's director Gene Quintano. Both as scriptwriter and director, Quintano is man well-versed in comedy and action, although luckily enough for Dollar for the Dead he keeps the comedic mostly verbal and/or dry, eschewing the hit-in-all-directions style of, say, his semi-flop Loaded Weapon I (1993 / trailer). In Dollar for the Dead, he introduces two apparently unrelated narrative strands that eventually come together in a neat bow to allow for the final pull-out-the-stops shootout in which all the evil folks are vanquished, the good or mostly good find a new start, forgiveness or even redemption, and those who should, ride off into the horizon. 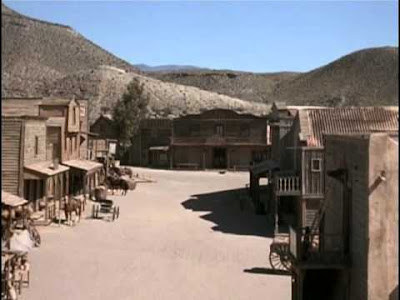 The initially lesser thread is that of the typically unprotected and powerless Mexican village at the mercy of an evil Federale (Jordi Mollà), with its put-upon Padre (Joaquim de Almeida) praying for Magnificent Seven (1960 / trailer or 2016 / trailer) salvation, while the main narrative concerns a nameless cowboy (Estevez) on the run from a huge private posse of a revenge-driven man (Howie Long) and who teams up with a one-legged former Confederate soldier named Dooley (Forsythe) to locate a hidden treasure once intended to finance the resurgence of the Old South. (And, one assumes, bring slavery back.) As Confederate treasures tend to be, this one is also being sought by an evil Yankee,* the Red Leg Col. Skinner (Jonathan Banks). The problem shared by both Skinner and Dooley is that each possesses only a fourth of the treasure map which, unlike in Lust in the Dust (1984), is not etched upon the skin of female buttocks but on four different gun holsters....
* Is there any such thing but a good Confederate and an evil Yankee? 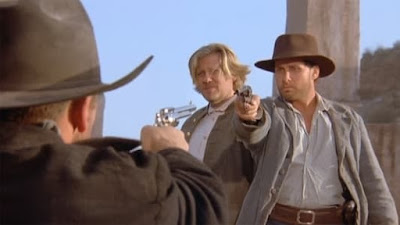 Shootouts, fistfights, a prison breakout, robbed graves and wild chases on horseback ensue — all well-seasoned with some great dialogue and an occasional understated visual joke — and suddenly, efficiently, the narrative threads do meet. Amidst it all, Estevez is probably the weakest link, but once you get used to his milquetoast appearance and can concentrate on the action and sequence of events, Dollar for the Dead becomes a truly fun and entertaining oater. Cinematographically, as mentioned, it never reaches the levels of a truly good Western, but then it also has no real artistic or psychological or interpretational agenda. It wants to entertain, to be an enjoyable Western, and that is what it is. 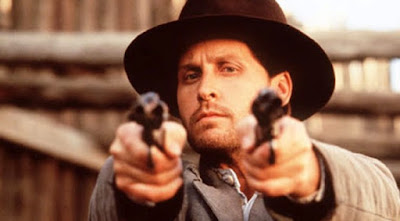 If you don't expect too much and don't think too much, you'll probably find Dollar for the Dead a great film to watch with your cowboy-loving kid, if not with anyone who has a penchant for unpretentious, action-heavy Westerns with huge body counts.
Posted by Abraham at 9:18:00 AM