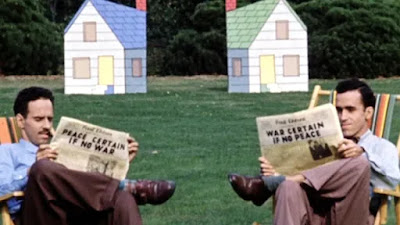 Here's a quirky little film from the early 50s exploring an age-old topic that can, on a metaphorical level, be used to represent anything from the current almost retro East/West conflict over  Ukraine to the relationship between the Democratic & Republican parties in the US. In its day, the common reading (if not intentional message) was that of French Canada and English Canada, with Jean-Paul Ladouceur (30 Dec 1921 – 21 Nov 1992) and Grant Munro (25 Apr 1923 – 9 Dec 2017) representing the respective sides. The closing text, presenting in fourteen languages, can be seen as the message the filmmaker Norman McLaren (11 Apr 1914 – 27 Jan 1987), pictured below, wants to impart. 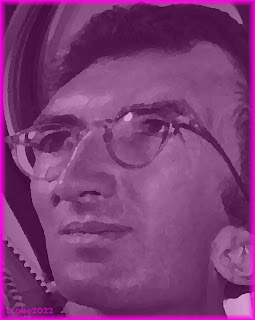 "Norman McLaren was a legendary animator, but live human beings are his stop-motion medium in Neighbours (1952), another tale of how pettiness and greed can turn two respectable neighbors into the most horrific of enemies. An allegory that still rings true today, McLaren taps into the darkest recesses of human nature in a truly original manner. This film also stands out in Oscar history for being nominated in both the Live Action Short and Documentary Short category (winning the latter). [Oddball Films — the great but sadly departed site that introduced this film to us.]"
Norman McLaren's
Neighbours (1952):
Scottish-born McLaren studied at Glasgow School of Art and, by way of NYC (1939-41) ended up in Canada with his Scottish-born "longtime companion" Guy Glover (5 Nov 1910 – 17 May 1988), whom he had met at the ballet in London in 1937. McLaren spent the rest of his life in Canada and ended up educating, promoting and shaping a whole generation of Canadian filmmakers. He had a penchant for experimentation, one that is found in Neighbours itself, which uses two techniques (pixilation & graphical sound) that, while not exactly new even in 1952, were and still are used relatively seldom. Pixilation, the stop-motion technique of using live actors as living stop-motion puppets, is perhaps the better known of the two techniques, as it enjoyed some popularity in music videos during the MTV generation — See: Peter Gabriel's Sledgehammer (1986) and The Talking Heads's Road to Nowhere (1985). Less familiar is graphical sound, a technique originally explored in Moscow by Pavel Tager (1 Oct 1903 – 30 Jun 1971) in the mid-twenties. The method is used to generate the almost computer-like sound effects of the film's soundtrack; the blips, peeps and pops were achieved by scratches on the edge of the film in the shape of various "blobs, lines and triangles", which the projector reads as sound. 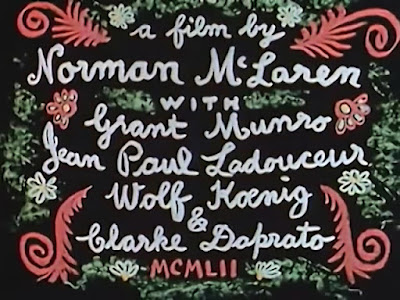 Interestingly enough, the version that won the Oscar is not the Neighbours here, which is a "reconstructed" version of the original version. According to David Curtis, in the Edinburgh Scottish Arts Council catalogue Norman McLaren (1977), McLaren removed the admittedly unexpected (and thus somewhat shocking) but consequent scenes involving the men's respective families to make the film more palatable to public taste. The scenes were reinstated after public sensibilities changed during the course of the Vietnam War.
Posted by Abraham at 9:35:00 AM