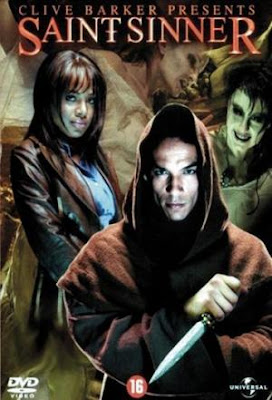 A Sci-Fi television movie, which made it to Europe as a DVD release, based on a film treatment by Clive Barker, and his name draw is fully exploited in the film's true full (and rather clumsy) title, Clive Barker Presents Saint Sinner. 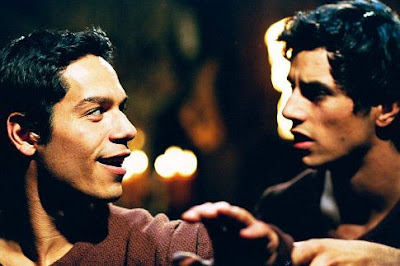 Seeing how uneven "Clive Barker flicks" generally tend to be (take for example, The Book of Blood [2009]), it is understandable that one might approach this relatively obscure and for the most part forgotten slab of small-screen horror with trepidation. Unexpectedly enough, however, particularly considering its pay-TV origins, Saint Sinner proves to be more entertaining than one might expect. Of course, you have to swallow a lot of pretty bizarre (perhaps stupid) ideas incorporated to drive the narrative, but if the concept that some "Pacific Northwest" monastery anno 1815 has a working Time Portal in their repository of relics sounds okay to you, then you probably shouldn't have to many objections to any plot point of the film. 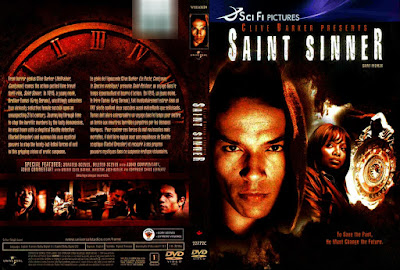 Trailer to
Saint Sinner:
Saint Sinner opens by introducing us to the undeniably delicious young monk, Brother Tomas Alcala, (Greg Serano of Undocumented [2010 / trailer]) lounging almost nude in the sun on a field, eating a ruby red apple as he enjoys the down-blouse view of the swinging breasts of a wench washing clothes at the nearby riverside. 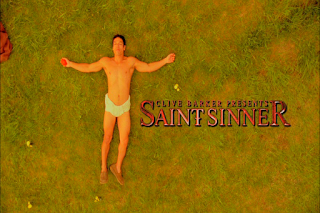 Yep, it is pretty obvious that Tomas is not much of a Godly monk, much less a saint. So it is hardly surprising that one evening, for no truly logical reason, the impulsive lad breaks all monastery rules and enters the relics repository with his cellmate and not-so-warm "brother" Gregory (Antonio Cupo of American Mary [2012 / trailer], photo below not from this film). Long story short, Tomas accidentally frees two ravenous succubae, Munkar (Mary Mara of Bound [1996 / trailer]) and Nakir (Rebecca Harrell Tickell of Sugar Creek [2007 / trailer]), who kill Tomas's bro and then hightail to the 21st century. Guess who follows them... 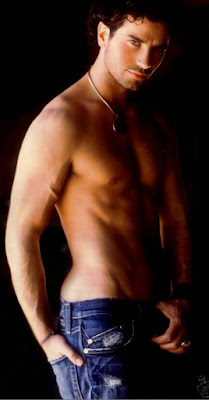 Munker and Nakir basically fuck-feast their way through the johns of Seattle, while Tomas promptly gets arrested as the main suspect of their first meal. Luckily, thanks to a shared hallucination of a killer slug and other stuff, he manages to turn one of the pursuing detectives, Dt. Rachel Dressler (Gina Ravera of Showgirls [1995 / trailer]), to his side. The question is, who is hunting who now? 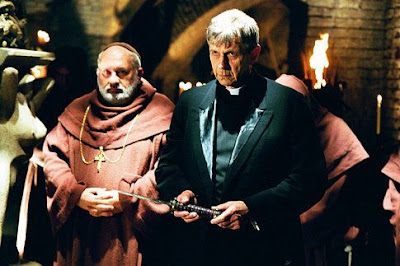 How closely the narrative follows Barker's original treatment we know not, but luckily teleplay-writers Doris Egan and Hans Rodionoff (the latter the director of Trance [2010 / trailer]) don't go the stranger-in-a-strange-land path and pretty much allow all three fish-out-of-water acclimatize to the new century more or less instantly. 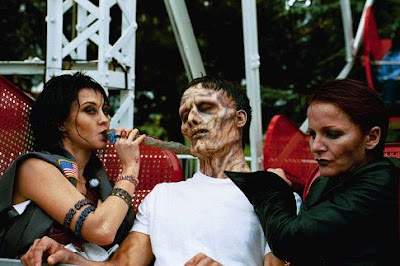 Likewise, while the narrative is very much one of redemption for Tomas, the redemption aspect is not overplayed. There is a bit of the typical God's will and/or plan platitudinizing, but then that is to be expected in any film featuring demons and a Christian monk with a mission. If one is willing to accept the idea of zombies or vampires or werewolves or whatever horror is your pleasure, then one really should be able to accept the idea of God for 1:30 hours. 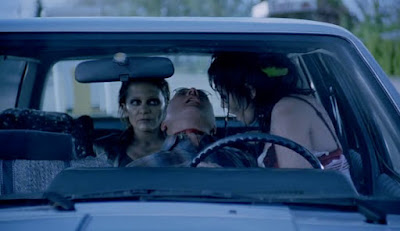 Though saddled with a lowly budget of only $4 million, director Joshua Butler (Deathlands [2003 / trailer]) makes a better flick than might be expected. For the most part, neither the acting nor the CGI are in any way embarrassing. Neither, for that matter, is the overall look of the movie: "real" feature films often look cheaper and cheesier than this thing. The plot may be a bit cliché — killer demonesses kill and feed on men, hero tries to stop them — but once the film hits the 21st century and the fucks-from-hell start having fun, the slime and icky scenes go a long way to keep the viewer entertained. 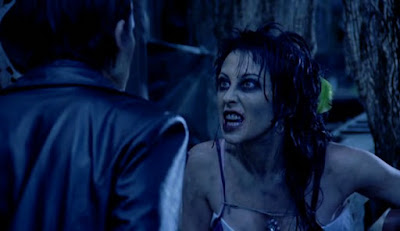 Is Saint Sinner scary? No, but is does have its repugnancy-factor and a few nightmarish scenes that do shock — for example, the first John and the poor rent-a-cop on the Ferris wheel. The big showdown is less knock-down than possibly expected, but it does involve the birthing of a "baby" that should have been aborted and a lot of slime. The ending is a bit of a happy downer, but it does help to make the movie seem a bit less TV. 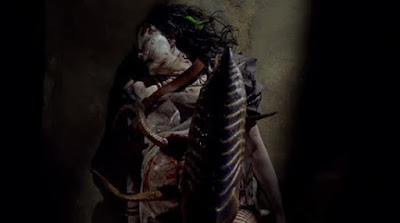 On the whole, however, the story of Saint Sinner is less a solid narrative than a thread used to string together the diverse shock and effects scenes. But that the film strings them together half-way successfully already makes the movie a lot better than many a mainstream summer blockbuster. If we gave stars, Saint Sinner would be two of four; on a peter-meter scale, the first scene did get our imagination lubricated, but everything in the film after Tomas pulls on his tunic for the first time is pretty much sex-negative: you have sex with women, you gonna die. 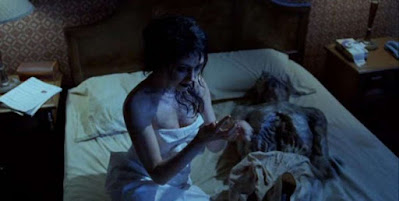