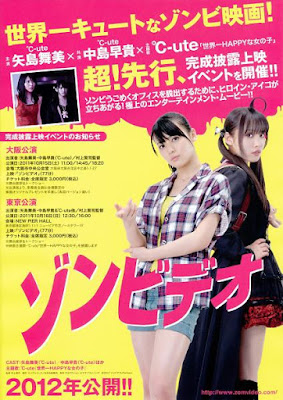 Over here in Germany, this zomcom was give the title Rage of the Undead, a title that is easily open to misinterpretation in that it sounds soooo serious when this mercifully short film (as in: it really doesn't overstay its welcome at only 77 minutes, even if it does fall apart towards the end) is anything but serious. It is a typically batshit, blood-drenched Japanese black comedy grotesque along the lines of, say, Vampire Girl vs. Frankenstein Girl (2009) or Tokyo Gore Police (2008), but perhaps with a tad less gore and somewhat lower production values. Be warned, though: "a tad less gore" hardly means that this film is blood-lite – "blood-lite" seems never to be an option when it comes to Nipponese comedies of this ilk. 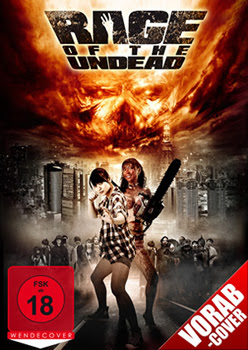 Japanese trailer to
Zomvideo:
Interestingly enough, and an indication of interesting cleft in the cultures between East and West, this flick full of exposed brains, scissors in eyes, throats ripped out, blood showers, melting faces, gay stereotypes and so forth is/was nevertheless seen as a viable vehicle for barely legal adolescent-looking pop-group nubiles: the cast of Zomvideo includes numerous members of the then still-active female pop group °C-ute (see the abysmal video below), including the group's lead singer, the at the time 19-year-old Maimi Yajima, who plays the film's main heroine. One has a hard time imagining any American pubescent female mass-market product — don't know any current examples, but think early Hanna Montana, Brittany or Selena Gomez (or Justin Bieber, for that matter, with or without tats) — being allowed, much less put, in a gore-heavy ludicrousy like this or even something similar but less extreme like, dunno, Zombiland (2009) or Shawn of the Dead (2004 / trailer). Don't think that would be seen as a good career move, for some odd reason…
°C-ute —
Ookina Ai de Motenashite:
Zomvideo starts off either somewhat meta or somewhat sloppy. The first person introduced is a school-uniformed, henti-aged lass running out of her house on the way to school, but she doesn't get very far before running into a zombified busker with an Everybody Love Mary (1998 / trailer) cowlick. Any notions that the lass might be the main character quickly go the way of all the blood that spatters on the piece of breakfast toast she drops on the ground, and soon she too is a cowlicked zombie. (Highly doubtful that this visual zombie attribute will ever achieve canonization — but who knows. Do you know? We don't know. Does Q know? He would, wouldn't he?) 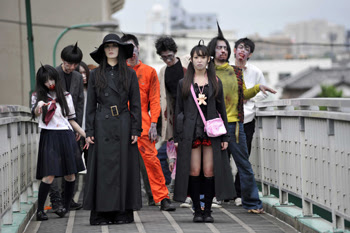 And then comes something that either got lost in translation or was due to cost-cutting measures or sloppy scriptwriting (or maybe we were so stoned we mixed things up): the zombification scene is part of a video, an ancient and shelved government-sponsored How to Survive a Zombie Attack educational video — think of the "culturally, historically, or aesthetically significant" short Duck and Cover but in blood-drenched full color and with Asian zombies instead of turtles, little white kids and atom bombs — made some decades earlier that the film's true heroine, the Asian-fetish-inducing Aiko (19-year-old Maimi Yajima of Fuyu no kaidan: Boku to watashi to obaachan no monogatari [2009 / full film], Black Fox: Age of the Ninja [2019 / trailer] and Ôsama gêmu [2011 / trailer]), discovers while going through an unsorted archive pile of unmarked videos at the video production company she works at (thanks to her uncle). But damn! Those very same zombies are now banging at the door. 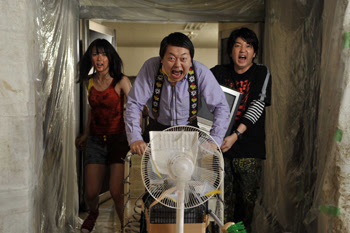 Okay, we admit that by now, a few days after having watched Zomvideo, we've sort of forgot some of the motivations behind specific characters — the zombies — but then this blood-spattered film is pretty ridiculous and little if anything was written or intended to be deep and serious (though there is perhaps an interpretational level to the flick on a kind of X-man level). In any event, the movie really doesn't remain in your head too long: it is fun while it lasts, but is hardly something to write home to your mama about. (Although you could, for unlike some other Japanese zombie comedies out there, for example Zombie Ass: Toilet of the Dead [2011 / trailer] or Rape Zombie: Lust of the Dead [2011 / trailer], Zomvideo doesn't leave you feeling dirty and ashamed for having watched it.) 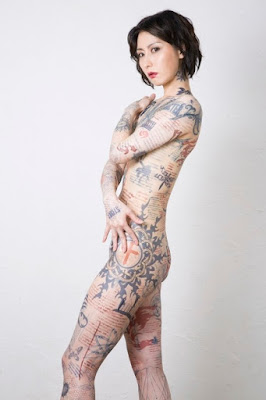 "Wait!" you say, "The zombies have a motivation? They want more than to eat your guts or, as the case may be, brains?" Yes, indeedy! Here, the zombies are led by the campy and at times annoying but always interesting Yasude (Miyuki Torii, above not from the film, of the sequel to Meatball Machine (2005), Kodoku: Meatball Machine [2017 / trailer], Zombie TV [2013 / trailer] and Plan 6 Channel 9 [2016 / trailer]). Dressed in an outfit that is a direct reference the famous Japanese cult character Matsu the Scorpion (who was in turn played by the Japanese cult actress Meiko Kaji), example poster below, Yasude's hat hides the fact that her brains are hanging out. For whatever reason, she can control the zombies even as she can control her own hunger for humans, and she and her sidekick (played by another cookie-cut of °C-ute jailbait) want something in the building where the horror-film-hating Aiko, her nerdy zombie-film-loving coworker Hashimoto (Tomu Miyazaki) and her Uncle are the last humans left alive. Luckily, the three have the Zomvideo to show them how to fight and kill zombies with everyday items… 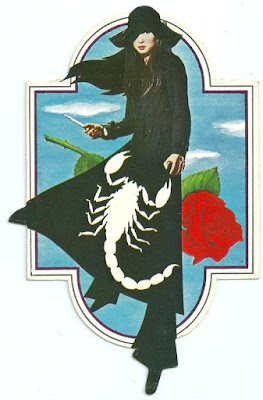 Zomvideo will hardly appeal to serious zombie purists, even those who like humor between the gut munching, for it leans way more towards the absurdly silly than the scary or unnerving (as in: way more like the fabulously inane series Z-Nation [2014-18 / trailer] than the mostly snore-inducing and traditional Black Summer [2019 / trailer]). Despite the schoolgirls and nubiles, Zomvideo refrains from sliding backwards to become just another Japanese underage-schoolgirl-fixated slice of sexualized exploitation and, once the zombies attack, evolves into a mildly surreal and offbeat grotesque that even includes moments of female empowerment. The silly bizarreness of the humor goes a little over the top towards the end with the big reveal of the video and doesn't really work, which makes for a mildly sloppy and disappointing ending. 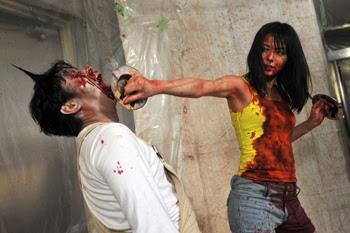 Nevertheless, on the whole Zomvideo remains an amusing way to pass a short period of time (as said, 77 minutes). Fun but inconsequential, the viewing experience is definitely improved with the presence of beer and weed, as well as a larger and verbal viewing crowd in front of the tube. Make this one a social experience. 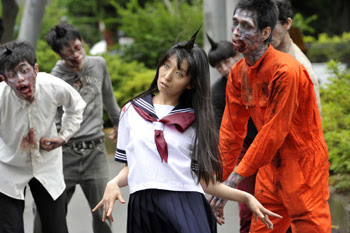