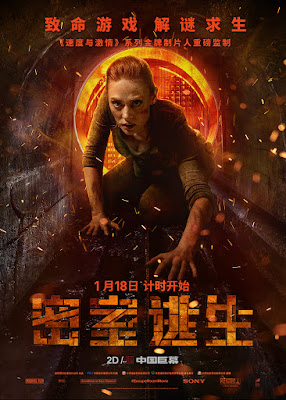 Not to be confused with the somewhat similarly plotted, yuppie-heavy Escape Room from 2017 (trailer), which isn't as much fun as this more inclusive tale. 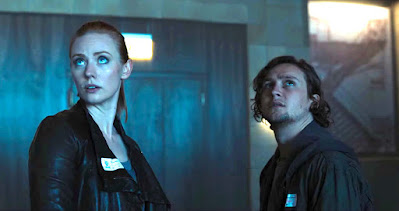 (Spoilers) One would think that the main lesson of the movie, that one should never accept an invitation sent in a Hellraiser (1987 / trailer) puzzle box, is something that everyone already knows. But not, obviously enough, the six main protagonists of Escape Room, who take the bait (which is, admittedly, peppered by a promised prize of a million bucks). And so the six desperate types find themselves suddenly thrown together in a series of escape rooms — but whereas in real-life, the worst that usually happen in an escape room (outside of Poland) is that one might die of boredom, in this flick here, failure to escape the given room means certain death. Imagine, if you may, an American retooling and simplification of the basic plotline of the Dutch cult sci-fi thriller Cube (1997 / trailer) in a contemporary setting and with a larger budget, if smaller cast. Cube is a good film... and, actually, so is Escape Room.
Trailer to
Escape Room:
Less a horror film than an edge-of-the seat suspense flick, Escape Room is nevertheless 100% bodycounter, so you know from the start that most (if not all) of the six, if not also some other character(s) possibly introduced at a later point, will be dead by the time the final credits roll. As typical of today's franchise-driven cinema world, however, Escape Room not only allows a very select number of the original six to survive, but even ends with a scene revealing the unknown baddies of the flick, the mighty capitalists behind the whole escape room project (most likely Charles Koch and Sheldon Adelson, maybe Peter Thiel) preparing the next escape-room situations for the sequel that is in development even as we write these lines.

In all truth, this epilogue ending presaging the further tribulations of our select survivors is perhaps the weakest and least-satisfying aspect of the entire movie, and director Adam "I Party with Bryan Singer" Robitel (a.k.a. Lester in both 2001 Maniacs [2005 / trailer] and 2001 Maniacs: Field of Screams [2010 / trailer] — see R.I.P. H.G. Lewis Part VII & VIII, respectively) really should've ended his movie without it. (In today's world, a sequel is generally a given if the first movie succeeds, so why tease it?) But up until then, Escape Room is a nail-biting blast.

Escape Room opens with a real hook: the character later introduced as Ben Miller (Logan Miller of Scouts Guide to the Zombie Apocalypse [2015 / trailer] and The Good Neighbor [2016 / trailer]) drops, worse for wear, into an escape room and is immediately confronted by certain death as the seconds tick by and he attempts to get out. Does he? Well, before that is fully revealed comes the time jump to where the tale begins, with the introduction of the extremely shy physics student Zoey Davis (Taylor "Judy Robinson" Russell of Suspension [2015 / trailer] and Down a Dark Hall [2018 / trailer]), and her casual mention of a physics theory of later importance, not to mention the successful securities trader Jason (Jay Ellis) — who really should have had a nude scene — and the previously mentioned Ben. Soon thereafter, at the location of the game, we meet the remaining fodder:  truck driver Mike (Tyler Labine of Tucker and Dale vs Evil [2010] and Cottage Country [2013 / trailer]), Iraq War veteran Amanda (Deborah Ann Woll of the Mother's Day remake [2010 / trailer]), and escape-room nerd Danny (Nik Dodani). Guess — without watching the trailer — who dies first? 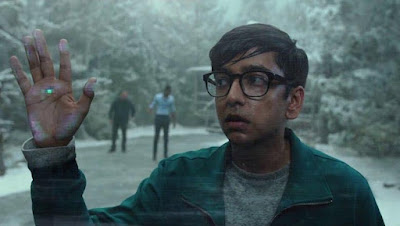 Needless to say, Escape Room disperses with any realistic reflection of how long it takes to find and put together the clues required to find the correct method of escape in real-life escape rooms. (Were that in any way realistically presented, the film would have a running time of days and be unremittingly boring.) But for that, the strongly resonating visualization of the threat of death that each room offers definitely heightens the tension of the tightly shot and edited searches for the individual solutions. 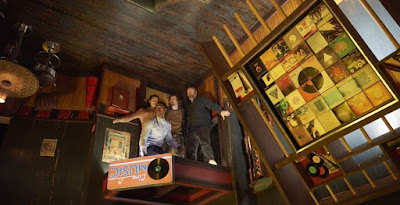 But a film like this would not work if some people did not die, so the number of protagonists dwindles even as we learn more about each of them. Indeed, it is the individual back-story of each, we learn, that serves as the basis of the individual rooms. (Interestingly enough, not one character dies in the room inspired by their own story.) It must be said, a definite plus point of Escape Room — and unlike many films of its ilk — is that the tension of the narrative keeps the viewer far more interested in the movie than in who's gonna die next and how.