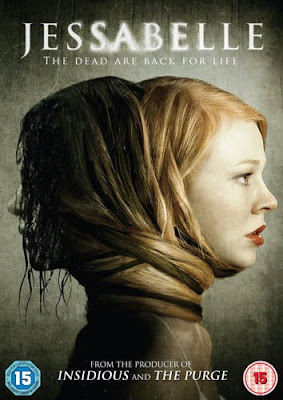 (Spoilers.) Entitled Jessabelle instead of Jezebel so as not to be confused with the 1938 drama starring Bette Davis (trailer), the film for which Ms. Davis won her second Best Actress Oscar. Not! (The bit about the confusion, not the Oscar.) 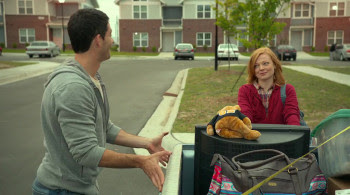 Naw, the flick's entitled Jessabelle probably to make people think of the better Blumhouse flick of the same year, Annabelle (2014 / trailer), or simply 'cause it's one of the myriad of ways the name (meaning "Wicked, Wealthy, Beautiful") is spelt in the USA, a land where you're free to spell names any ol' way since most people can't really spell all that well anyway. And going by what transpires in this movie, some people can't write horror movies, either.
Trailer to
Jessabelle:
A Deep South horror flick, Jessabelle, as directed by Kevin Greutert (Visions [2016 / trailer] and Jackals [2017 / trailer]), one of the progenitors of the dead-horse-flogging Saw franchise, and written by Robert Ben Garant (Hell Baby [2013 / trailer] and The Veil [2016 / trailer]), has enough plotholes that if it were a sieve your pasta would fall through it. The nicely nasty opening scene, in which the saccharine-sweet declarations of love between pregger Jessabelle "Jessie" Laurent (Sarah Snook of Predestination [2014 / trailer] and Brother's Nest [2018 / trailer]) and her daddy-to-be fiancé Mark (Brian Hallisay of Hostel III [2011 / trailer]) come to an abrupt car-crashing end is probably the most horrifyingly effective scene in the movie, and the ending is unexpectedly downbeat and thus commendable, but the problem lies in everything in between. (And that, if you get down to it, is roughly 85 minutes of the 90-minute running time.) The scares are generic and almost always expected, and should you actually start to question the developments in the narrative or the actions of the characters, you might find yourself scratching your head so hard that you reach your brain. 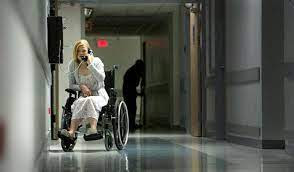 The basic premise of a young woman who has lost everything and is now stuck in a wheelchair returning home to a father she hardly knows only to be confronted with ghosts of the past is, well, as much a realistically horrifying idea as it is the fodder of TV movies, which this film sometimes feels like. Here, of course, since it's a horror movie, the ghosts of the past are not of a figuratively speaking kind, but real spirits in the night (and day, actually). The concept that ghosts age, however, is pretty bat-shit out there — does that mean they grow old and die, eventually? (Where do dead ghosts go, we wonder.) But aging ghosts is a peripheral (and never mentioned) aspect of the tale told in this movie: a murdered, mixed-race baby born the same day as white-gal Jessie obviously has aged year for year within the walls of Jessie's dad's home and in the waters of the adjacent lake, matching Jessie's growth in the corporal world. 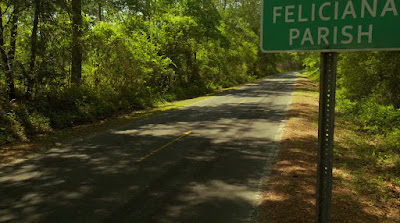 Oddly enough, however, going by how they look when they finally appear in the final scenes of the flick, the ghosts of Jessie's "mom" Kate (Joelle Carter of Cold Storage [2009 / trailer]) and Kate's former Afro-American lover Moses (Vaughn Wilson) don't age a day in the afterlife. Not only that, Moses the Ghost can obviously teleport, for he is the only ghost to appear far away from the location where he died, rather unlike the now young-adult Dead Girl with unnaturally immobile boobs (Amber Stevens West, seen below not from the film), who can take solid enough physical form to beat the shit out of Mr. Former Hometown Boyfriend Preston (Mark Weber of 13 Sins [2014 / trailer], Uncanny [2015 / trailer], Green Room [2015 / trailer] and Antibirth [2016 / trailer]) but keeps her appearances only to the backwater homestead. (Of course, could all the ghosts of the flick teleport like Moses, then Jessie would never have to had come home to start experiencing the supernatural.) 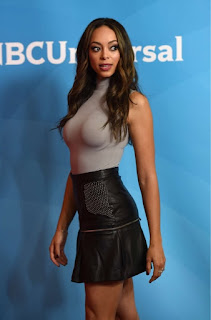 The ghosts have other powers, too. Not only can they smash whiskey bottles while unseen, they can regenerate the bottles as well, so that for whatever reason, the bottle is back at the bedside again later on. And they can close doors and latches, the latter particular handy when it comes to taking an exceedingly late revenge upon Jessie's "dad", Leon (David Andrews of Cherry 2000 [1987 / trailer] and Graveyard Shift [1990 / trailer]). 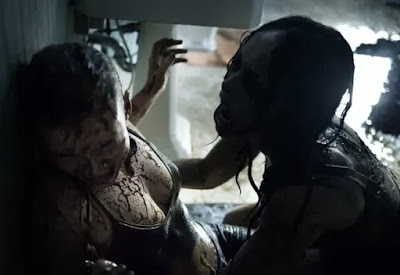 Most amazingly, with a blink of an eye they can miraculously clean a flooded and ruined bathroom and fully re-dress Jessie, who seconds before was fighting for her life nekkid in the tub. (Even odder, not only is she suddenly dressed when the ghost pulls her from the tub, but no one notices that she somehow got dressed and dry while she was having her screaming fit behind the mysteriously locked bathroom door, not even the caretaker who had helped put her get nekkid into the bathtub.) And the ghosts obviously like to clean, too, because when Jessie moves into the old room of her "mom", which has obviously been closed off since mommy's death almost two decades earlier, the room is spotless — something neither she nor Leon find in any way odd. 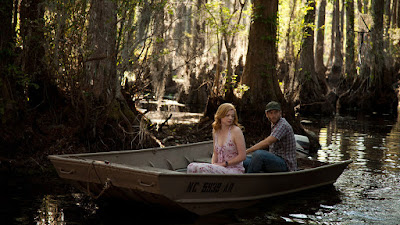 These and many other sloppy non-details, combined with the general predictability of the movie (but for its opening and closing scenes) make Jessabelle definitely non-essential viewing when it comes to the genre of horror films. On the plus side, the acting is mostly okay (the actor playing Jessie is actually and unnoticeably from The Land Down Under), the locations great, and the direction perfectly competent. In the end, however, both the talent and the location are basically wasted in Jessabelle, a movie so narratively stunted and lazy that one wonders how it ever got made, much less released. Really, we love how, towards the end, Jessie the Rocket Scientist suddenly realizes everything behind everything and tells it all out loud so that the slower (as in most) viewers can finally catch on to the what, why, how, when and where of the events. 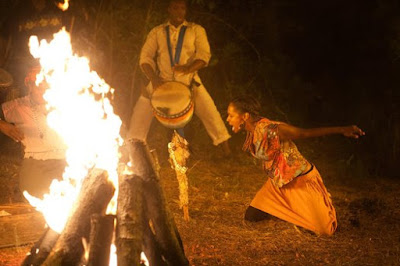 One mildly interesting inference of the flick that is less poorly developed than simply dropped in the viewer's lap for a few moments during the big closing showdown is that the haunting and ghosts could all be the manifestations of Jessie's own guilt for surviving the crash that killed her beau and unborn babe as well as for being unable to help her father when he gets stuck and dies in the burning shed. But the final scenes beneath the waters of the lake and her last words to Sheriff Pruitt (character actor Chris Ellis of way too much to mention) pretty much render that interpretation a big "Nope". Them there be ghosts, and them ghost don't be nice. And this movie don't be good none, either.
Not from the movie –
Edith Piaf's 1951 version of
Frankie Laine's #2 hit from 1951, Jezebel:
Posted by Abraham at 9:47:00 AM