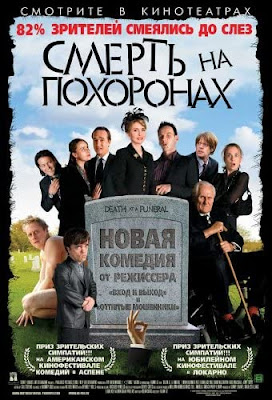 This British flick directed by the American director Frank Oz got a lot of positive press in its day, and was enough of a success outside the US that it got remade in Bollywood (as Daddy Cool [2009 / trailer]) and in the USA by Neil LaBute (as Death at a Funeral [2010 / trailer]), the latter version of which even kept talented star-name short guy Peter Dinklage in the same part he played in the original. And while we do wonder how a farcical comedy about an uptight British family with familial differences dealing with a funeral gone wrong works when the setting is changed to an uptight Afro-American family, this version here had hardly enough true laughs to instigate the desire to see the newer American version, despite the last's intriguing cast. 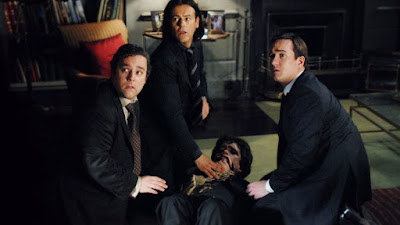 Not to say that Oz's movie was absolutely terrible, but it is pretty much a waste of time. Neither all that funny nor all that shocking, Death at a Funeral makes the mistake of basing most (though admittedly not all) of its laughs on two stale concepts: accidentally ingested drugs and the sudden appearance of the gay lover of the "straight" male patriarch — oh, and because it's funnier, the lover is a dwarf.
Trailer to
Death at a Funeral:

Personally, it would seem to us that such a difference in height does have its advantages: at least one of such a couple would seldom chafe their knees. Indeed, the gay dwarf lover bit does have its humorous aspects, though it is somewhat distressing that the filmmakers reduced his need for recognition or possible closure to mere greed (them shifty gay folks are just bad people, and worse when they be short). But then, had Peter Dinklage's character, Peter, been presented as a truly sympathetic person, most of the related "dark humor" would have left a bad taste in one's mouth and the Brits in the flick would have seemed much more like the uptight jerks they truly are than they do when they're merely losing grip on an inane and unexpected situation caused by a blackmailer. 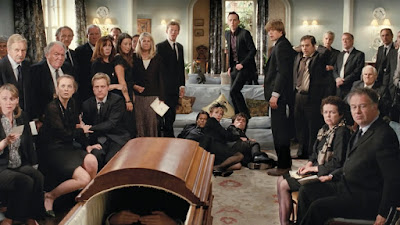 As for all the drug-related stuff, well, the concept of accidental ingestion of hallucinogens is generally funnier to people who have never taken them, and the scriptwriters don't seem to display any founded knowledge in how hallucinogens work. (Which, perhaps, is why we found it all so unfunny.) If the drugs were really as strong as they are said to be at one point, Little Peter would have a permanent brain of mush, a fact that makes it hard to laugh at anything that happens to him. Ditto with wimpy nice guy Simon, played by Allan Tudyk, a man who is truly very funny in Tucker and Dale vs Evil (2010) but not very here: his dosage may only have been enough for a strong but simple trip, but even a simple trip can turn damagingly bad in the wrong environment, and the funeral environment at the House of British Twits as shown in the movie is not a good environment. (Indeed, a funeral anywhere is probably not a good environment to drop hallucinogens — Timothy Leary's excepting.) That his girlfriend (Daisy Donovan) nevertheless did not blow off the funeral for his own safety once she discovers she's accidentally dosed him (with mislabeled drugs) is simply irresponsible on her part, regardless of how relationship-reaffirming their narrative ends. 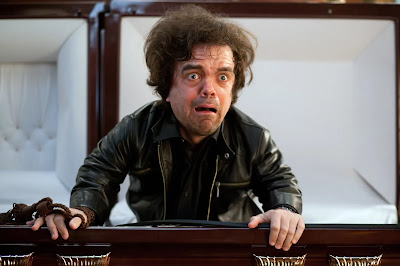 In any event, if unrealistic drug ingestion and dwarf lovers and watching farcical disaster after farcical disaster, small and large, pile up one after the other and on top of one another is fun or might be funny for you, then this day in the life at a funeral held at the home of an uptight family of upper middle class twit Brits might be your tepid cup of tea. Others will probably come away feeling like they have wasted their time… 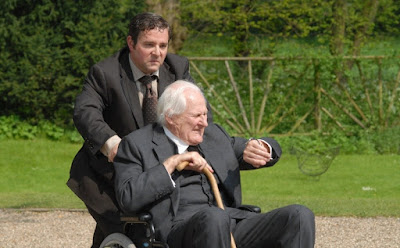 But then again, for the benefit of doubt: if Death at a Funeral is watched with a larger group of people (say, in a cinema), where the laughter of other, easier-to-please viewers can help carry along those who find the darkly "humorous" events of the narrative a bit too predictable and too easy, it is possible that the movie might come across as far funnier than when viewed in just a small group or alone. 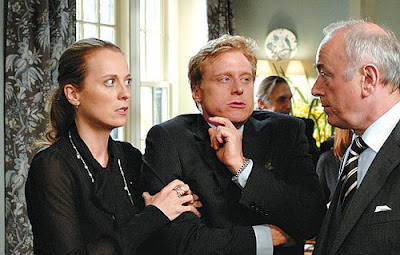 Death at a Funeral is, in any event, well cast and well acted and well shot — it's everything else about the movie that just isn't right.
Posted by Abraham at 1:15:00 PM