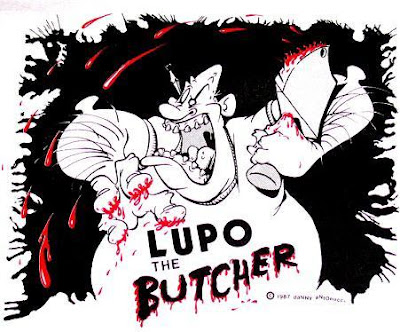 A possibly somewhat forgotten cult classic, Lupo the Butcher is short, profane, bloody and funny as hell. It's the first solo animated production of writer/director/animator Danny Antonucci (b. 27 Feb 57), who went on to create the much-hated MTV series The Brother Grunt (1994-95) and the far more successful (and less-despised) animated TV comedy series Ed, Edd n Eddy (1999-2008). Those shows, like Lupo the Butcher, are stylistic testaments to Antoncci's advocacy of hand-drawn animation.
The three-minute short is about an overweight, ill-tempered butcher and was produced by Marv Newland's International Rocketship Limited.* Even in the days before the Net, Lupo achieved sizable cult popularity — the butcher himself was even given a quick cameo in Bill Plympton's great feature animation film, The Tune (1992). Of greater financial remuneration for the filmmaker, however, was probably the licensing of Lupo to Converse's, which resulted in the animated commercial Lupo's Nightmare (1995).
The toon's former popularity is easy to understand, and Lupo the Butcher stands as a testament that sometimes the execution of an idea can make a one-line, one-laugh concept to go a long, funny way. Enjoy!
* Newland's graduation project at Pasadena's Art Center of Design, Bambi Meets Godzilla (1969), was chosen as our Short Film of the Month way back in September 2009. Go watch it.
Lupo the Butcher (1987):
Posted by Abraham at 8:24:00 AM