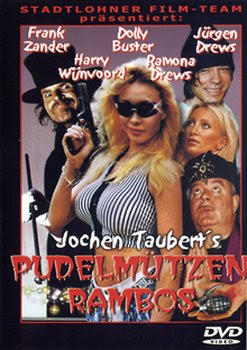 An English-language review for this "movie" is probably pointless, as Pudelmützen Rambos will surely never be dubbed or subtitled in English (or any language), but hell: if we don't review it, surely no one else ever will. (No great loss, probably.) 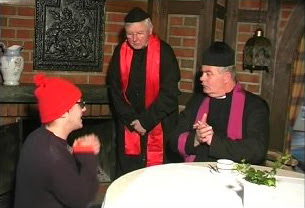 We here at a wasted life actually have rather a weak spot for Jochen Taubert flicks, going so far as having said a positive word or three for two other of his shot-on-video D2V "movies", Ich pisse auf deinen Kadaver ["I Piss on Your Cadaver"] (1999) and Zombie Reanimation (2009). Theoretically, we should have one or two for this one, too, the title of which translates into Pom-Pom Cap Rambos, as we laughed a lot while watching it. But, shit: this "movie" just goes on for waaaay waaaay waaaay waaaaaaaaaaaaaaaaaaaay too long — seriously, only a true masochist could possibly enjoy two straight hours of a Taubert film. And, sorry: padding a movie with Z-level music videos of crappy songs by crappy musicians (above all Jürgen "King of Mallorca" Drews) is unforgivable.

Trailer to
Pudelmützen Rambos:
To quote from our Zombie Reanimation review: "[...] it is virtually pointless to argue whether this film (or any of his other ones) is good or bad — though it is a fact that the acting sucks, the story idiotic, the production Z-level, the actors uniformly unattractive (though the gal who did the hilariously gratuitous nude scene does have a tasty body), the blood and effects messy but undeniably fake-looking, and the pacing inconsistent. Indeed, [Pudelmützen Rambos] makes almost every other film ever trashed on this blog look like a professional Hollywood production. But then, everything here sucks on purpose, so can it be held against the film?" (It should perhaps be noted that that Pom-Pom Cap Rambos also has "gratuitous nude scene [from a pneumatic gal who] does have a tasty body".) 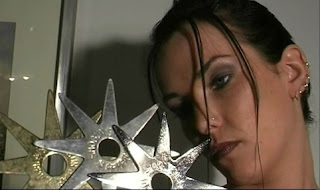 Cobbled together from past projects and new material and filled with his usual suspects and a few new faces, the nominal D-stars who appear voluntary or involuntary (Ralf Moeller only appears thanks to archive footage, as does Berlin personality Frank Zander) must have been in the midst of a bank-account-draining drug addictions to show face here. Strangely enough, while Dolly Buster (below, not from the film) does a lot of shooting and strutting around in this movie, she never actually shows her assets. 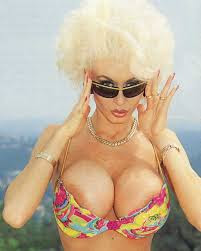 Also not from the film —
Dolly Buster singing
Schöner Fremder Mann:
There isn't a plot for most Pudelmützen Rambos, which features a gang of pom-pom cap-wearing losers (to become a member one must eat poodle testicles — in reference to the German name of the caps, "poodle caps") and focuses mostly on Charlie (Christian Bütterhoff), who has a fixation on Laura Croft (played by a tasty, measurably-mammoried girl whose name we know not). Somewhere along the way the movie veers off into a "save the girls" plot: scene after scene of girls getting kidnapped by the soldiers of a vampire leads to the Pudelmützen gang (and everyone they can get) joining forces to vanquish the evil. Single-scene jokes and the kitchen sink are worked in throughout the movie wherever they can be stuffed, most falling so flat that they become funnier than they are. Taubert, who knows his directorial roots, even works in an obviously intentional Ed Wood/Bela Lugosi Plan 9 from Outer Space (1959 / trailer) homage into the flick: Zander, as the vampire figure, is always played by a stand-in whose face is never shown for every scene not taken from Zander's music videos. 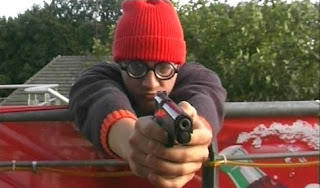 Ever hear of "Outsider Art"? Well, director/scriptwriter/producer/cinematographer/dictator Jochen Taubert does more than just make independent films, he makes Outsider Films. To say his work defies all rhyme or reason is an understatement, but he is obviously a dedicated soul, if not a completely obsessed filmmaker. 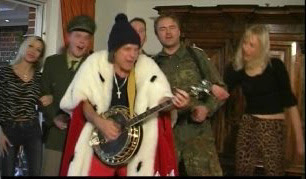