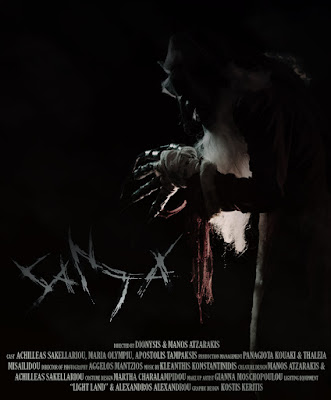 Oh, shit! Forgot: T'is the season to be jolly. Is that even still possible, considering the greedy little hands we've put our nation in? Well, we can surely be jolly in a few months to come, when he starts royally fist-fucking the misguided souls who put him in power. He'll be their gift that never stops giving … his Vaseline-smeared little hands.
But in the meantime, here's our Short Film of the Month for December, 2016, with a seasonal theme as tradition calls for, entitled Santa. This little flick, though Greek, can almost be read as an allegory of the US and what's to come. You simply don't always get what you expect, and you just might find you get a monster instead.

As far as we can tell, directors/writers Dionysis "Let's Paaaarty" Atzarakis and Manos "Hands of Fate" Atzarakis have yet to direct/write another movie. For a one-shot wonder and quickie, Santa packs a nice wallop. It is also probably the shortest short film we've ever presented. Indeed, it is shorter than the average commercial, so in the time you've spent reading this you could've already watched it. So do so, now.
To give credit where credit is due:
Directed by: Dionysis & Manos Atzarakis
Produced by: Thaleia Misailidou & Panagiota Kouaki
Cast: Achilleas Sakelariou, Maria Olympiu, Apostolis Tampaksis
Director of Photography: Aggelos Mantzios
Music by: Kleanthis Konstantinidis
Posted by Abraham at 3:10:00 PM