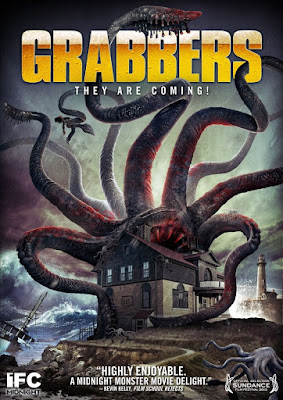 We like to drink. And we know many other people who like to drink. And when we all go out drinking together, we generally have a great time: we're witty and funny and party hardy and life is grand. That is how it is on the side of the bar that drinks, not serves. But on the side that serves, well, in another life that lasted some 15 years, 10 of which was spent serving the drinks — the other 5 were spent hiring and firing those who served them — we learned something: drunk people aren't funny. At least, not if you're not drunk, too. (Luckily, in Berlin, at least in the bars we worked in, drunken bartenders were employable and socially acceptable.)

But we weren't drunk when we watched Grabbers, a comedy monster film, with five similarly sober friends. And though we drank while watching, we never actually got drunk — or at least not drunk enough to enjoy this movie. Seldom were any of us more bored, and seldom have we laughed less.

Grabbers, the basic plot of which involves a remote Irish town that has to drink themselves into a drunken stupor to survive the onslaught of the titular monsters from outer space, which happen to be alergic to alcohol, is one dud of a movie: predictable from start to finish, almost never scary or in any way tense, thin on laughs, and full of unfunny drunken people.

Which isn't to say Grabbers doesn't have a few plus points. For one, it features Bronagh Gallagher (Botched [2007 / trailer] and Malice in Wonderland [2009 / trailer]) in a secondary role with a Betty Page haircut; we would have liked the film even less had she not been present, regardless of how minor her part.* Secondly, it has some truly fine cinematography and the landscape is fabulous — but then, the landscape of Ireland is fabulous, so that must be seen more as a credit to the country and not to this movie. (Believe us: if you've never driven through Ireland, do so; you might decide to move there.) Ditto with the great accents: the Irish lilt is always a pleasure to listen to, but again, this a credit to the land and not the movie. But other than the above three aspects, there is little to recommend in this predictable, almost trite, and definitely neither funny — OK, we did laugh when Dr. Adam Smith (Russell Tovey of Blackwood [2014 / trailer]) went flying through the air, but that was over half-way into the movie already — nor scary monster film.

* Her little exchange about renting the bridal suite reminded me of an exchange I had many years ago in Cork, but in reverse, in a sense. Having travelled through Ireland for 14 days with an Irishwoman friend — as in, non-sexual friendship — we arrived in Cork late in the evening and managed to find a bed & breakfast. When the lady of the house was showing us the room, the first room after 10 days in which the beds were separate, a fact that made both me and my friend happy, the proprietress suddenly chimed out with that fabulous accent: "Should I push the two beds together in case you want to commit a mortal sin?" 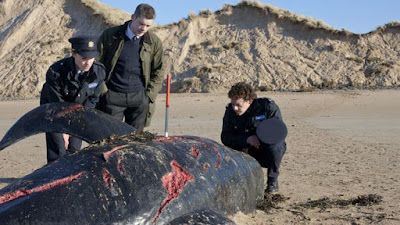 Were we in any way forgiving, we might also mention that the editing and lighting are first-rate, the CGI not shabby, the blocking and cinematography professional, and some of the acting (up until they play "drunk") is mildly good — but who gives a shit when the movie, as a whole, fails so miserably? It actually hurt now and then to see the good points wasted in a movie that was so predictable, so completely unoriginal. Hell, in the first scene that Garda Lisa Nolan (Ruth Bradley) has her coffee prepared by Garda Ciarán O'Shea (Richard Coyle of Outpost: Black Sun [2012 / trailer] and Franklyn [2008]), you already know they're going to end up a couple.

Why? Because the screenplay is by the number and has all the creativity of the pitch that was probably given: "Well, see, we take Tremors (1990 / trailer) and make the graboids into rolling octopuses called grabbers that drink blood, and move the setting from ugly Buttfuck USA to beautiful Buttfuck Ireland because the Irish like to drink and drunks are funny." Whoever green-lighted this thing must have been drunk is all that we can say. 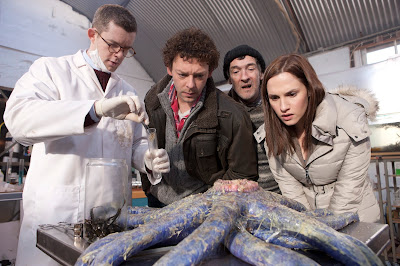 How and why Grabbers gets so many good reviews is beyond us, and actually says less about the quality of the movie than the ease with which the masses are satisfied. Major bomb. Not funny. Total waste of time. Want a good, semi-contemporary monster movie? Go for Tremors — or, with less monster but with a similarly pro-drug attitude (yes, alcohol is a drug), the funny and suspensful teen horror flick, The Faculty (1998 / trailer). Or, if it's just suspense you want, Splinter (2008). But skip Grabbers. We sure wish we had.