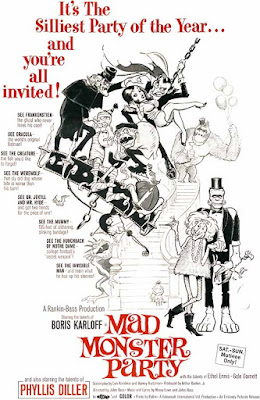 Directed by Jules Bass. Jules Bass (born 16 September 1935) was one half of Rankin/Bass Productions, Inc., a US American production he founded on September 14, 1960, as Videocraft International, with his partner Arthur Rankin, Jr. (19 July 1924—30, Jan 2014). Rankin/Bass specialized in stop-motion features (usually for TV) made using their self-named "Animagic" technique, though they also made an occasional live action or traditional animated movie. Most baby-boomers and elder Gen-Xers are familiar with one or another of their movies, above all the 1964 stop-motion TV production Rudolph the Red-Nosed Reindeer (remix trailer), which was at one point as much of an annual TV tradition as the annual broadcast of The Wizard of Oz (1939 / trailer). [As we no longer live the US, we have no idea if either film is still a traditional annual broadcast.]
Trailer to
Mad Monster Party:
Mad Monster Party is one of their rare stop-motion, feature-film productions, starring the voices (and likenesses) Boris Karloff and Phyllis Diller. The project was probably spurred by the TV popularity of campy monsters, as exemplified by series such as The Addams Family (1964-66) and The Munsters (1964-66). The great Harvey Kurtzman, of Mad magazine and EC comics, had a hand in writing the script; popular if unsupported rumor has Forrest J. Ackerman involved in the script as well. Interesting trivia: this was the last project associated with Frankenstein that Boris Karloff took part in, 36 years after gaining fame by playing the monster in James Whale’s Frankenstein (1931 / trailer).

This movie seems to now be a popular cult film, but we only stumbled upon it a few weeks ago. And while the trailer does pique our interest, it is the two music videos found further below that really make us want to see the movie. After years of neglect, within the last decade it has enjoyed a couple of remastered releases on DVD, most recently by Lionsgate. The film was released on Blu-ray on September 4, 2012.
Ethel Ennis sings
Mad Monster Party:
The plot, as found at TCM: "Aging Baron Boris von Frankenstein (Karloff), who lives on a Caribbean island with his monster, his wife (Phyllis Diller of The Boneyard [1991]), and his ward, Francesca (Gale Garnett of The Children [1980 / trailer]), discovers the secret of total destruction, thus completing research that began with the discovery of the secret of creation. He decides to hold a convention for the world's most renowned monsters so that he may choose a successor to lead the Worldwide Organization of Monsters and to inherit his secret. The guests include Dracula, The Werewolf, the Creature from the Black Lagoon, It, Yetch (a Peter Lorre characterization), The Invisible Man (as played by Claude Rains), Dr. Jekyll and Mr. Hyde, The Mummy, Quasimodo (as played by Charles Laughton), and King Kong. Felix Flanken (Allen Swift), Frankenstein's supposedly normal nephew, kept in ignorance of the proceedings, falls in love with Francesca, unaware that she is one of his uncle's mechanical creations. Intrigue follows intrigue as the monsters try to surpass one another to gain the prestigious position. Francesca meets with a surprise when Felix's identity is revealed." 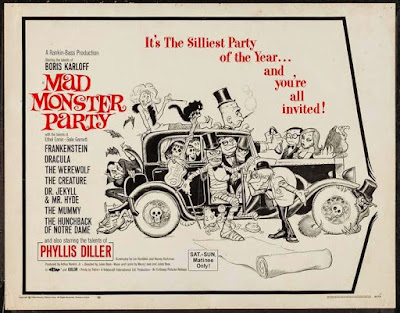 In 1972, Rankin/Bass released the animation TV movie The Mad, Mad, Mad Monsters (1972 / trailer), a prequel of sorts to the original. The soundtrack was released in 1998 by Percepto.
The Mummy
by Little Tibia and the Fibias
Posted by Abraham at 6:14:00 PM