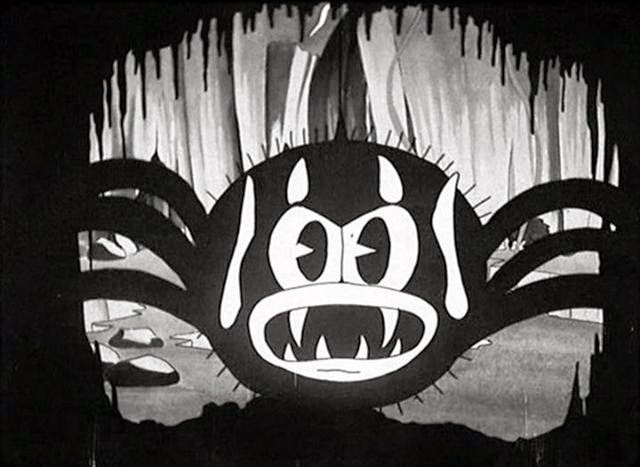 Special thanks to the blogspot DW Rayger Dungeon for bringing our attention to this amazing and unbelievably overlooked slice of historic animated fun.
Like Skeleton Dance (1929), which we presented four years ago as our Short Film of the Month for March 2010, Hell's Bells is a Walt Disney-produced animated short from the days when animated shorts weren't made just for pre-peachfuzz kiddies.
Skeleton Dance was the first of 75 Silly Symphony shorts produced by Disney between 1929 and 1939; Hell's Bells was the fourth. The series went on to win the Academy Award for Best Animated Short Film seven times, including the first six years in which the award was even presented, but in our opinion few of the later Symphonies were ever as daring and different as the early, primitive ones such as this one, despite the almost predictable template the early ones all shared. (Close ups, frontal group dance scene, solo dance, chase, sight gags in passing, etc. — watch three or four and you'll see it.) 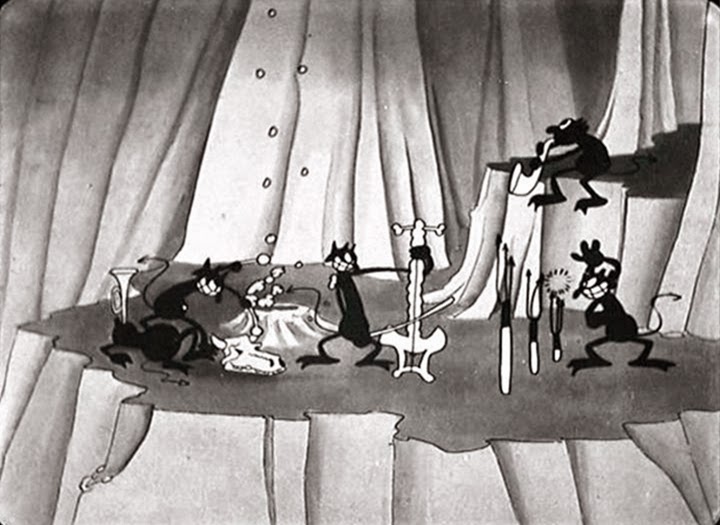 Whereas Skeleton Dance was supposedly directed by Disney and drawn by Ub Iwerks, for Hell's Bells Disney sat back and let Iwerks direct and draw (though he only gets credit for the latter). The music used includes Charles Gounod's Funeral March of a Marionette (best known today as the theme tune to the classic TV show Alfred Hitchcock Presents) and Edvard Grieg's fabulous In the Hall of the Mountain King. 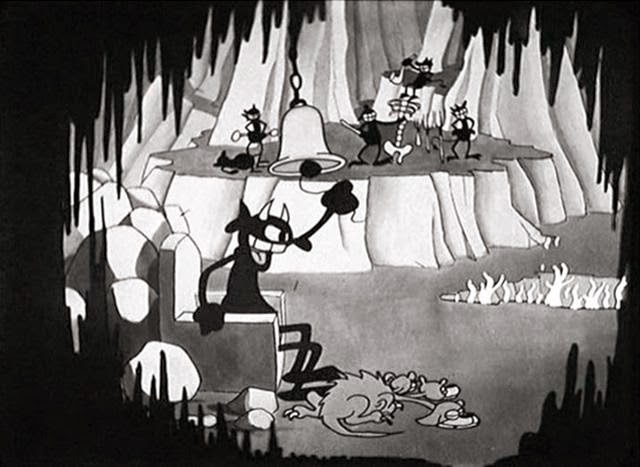 The plot of the 5:32 minutes of animated fun, as explained at The Disney Wikia: "Satan and the demons gather for a wild party. After the demons play music, Satan has them 'milk' burning flames out of a dragon cow and he drinks them. He then feeds one of his little demons to his three-headed hound Cerberus. The other one runs away and eventually kicks Satan off a cliff where he is consumed by flames."
Hell's Bells is an unjustly overlooked short, amazingly unknown for a short as strange as it is. The animation is excellent, the visual gags funny and often truly surreal, and the film on the whole is on another planet. (Our favorite interlude is probably the Cubist dancing demon.) We only wish we could one day see this thing as it was intended: on the big screen.
Why a short like this is as unknown as it is, is a mystery to us — but to do our two cents' worth to change that situation, we're presenting this short animated masterpiece as our Short Film of the Month for October 2014. We know you will enjoy it!