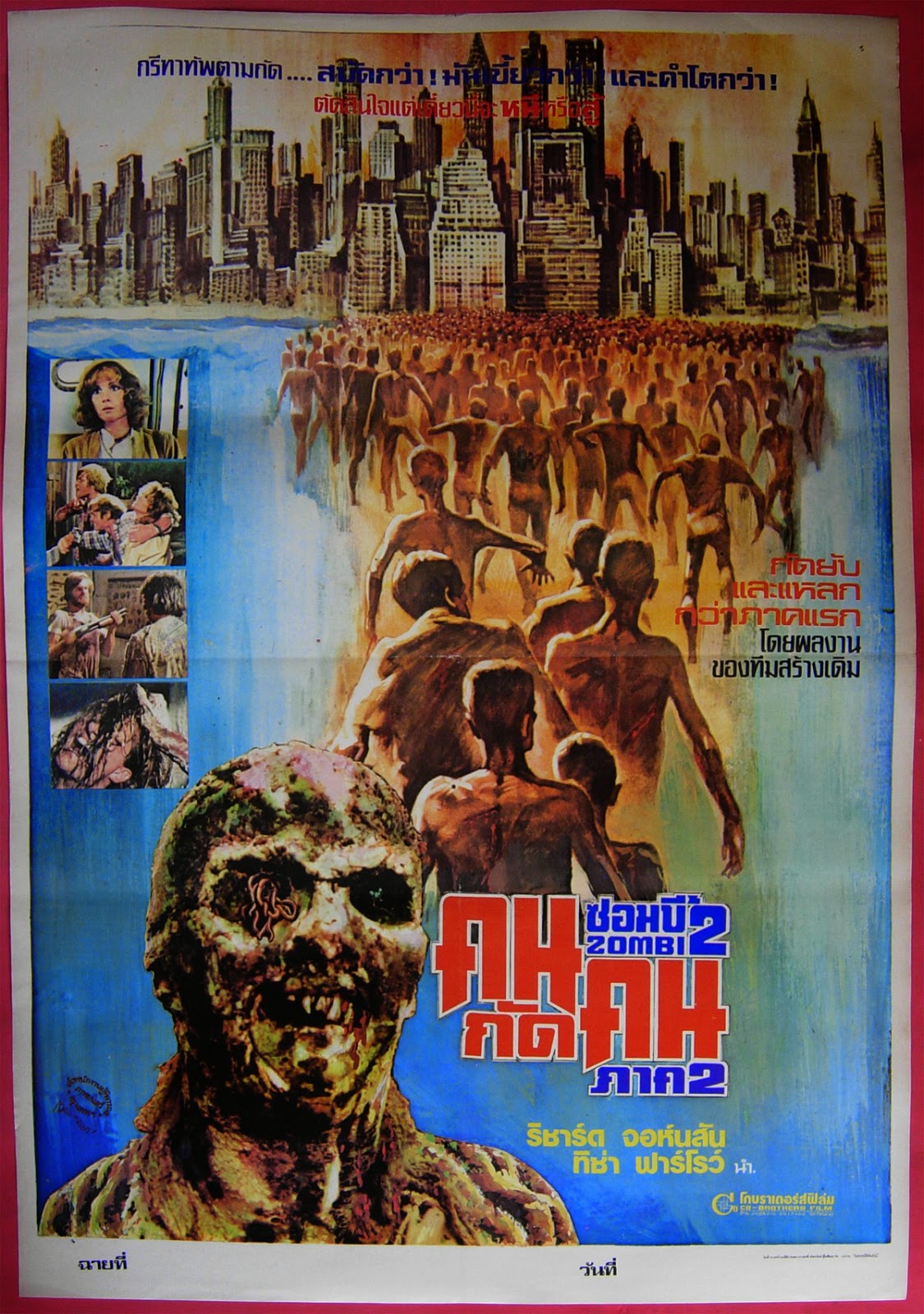 Way back when this film came out, we were but a wee pubescent white lad bussed daily to a predominantly black school in Beautiful Virginia is for Lovers; all the black guys saw it and couldn't talk about anything else, leaving us honkies envious: there was no way in hell we could talk our parents into allowing us to even see the movie, much less into taking us to the neighborhoods where it was being shown — Grindhouseville — and, well, we didn't have the gonads to go to those places alone. And thus we missed another gore classic of yesteryear... 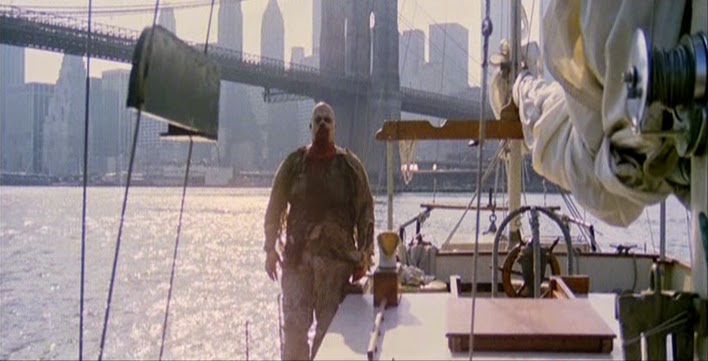 Back then, needless to say, we knew not that the flick was dubbed Italo trash, and the name Lulci Fulci meant nothing to us. The movie was, of course, riding on the success of George Romero's Dawn of the Dead (1978 / German trailer). Romero's movie was a co-production with the Italo master Dario Argento, and Argento's cut of the film was released in Europe as Zombi; just like Romero's version in the US, it was a huge hit. Thus it was natural that the Eurotrash rip-off factory known as Italy quickly began regurgitating their own shambling, flesh-eating zombie flicks, and one of the first (if not the first) was this one, released as Zombi II and sold in Europe as a sequel despite having absolutely nothing to do with the original Romero movie. (It is claimed that the movie was actually in production prior to Dawn of the Dead, with the opening and closing scenes added to tie it into Romero's series after the success of his movie, and while that could possible, the plot is too linear to convincingly suggest that the opening and closing scenes were added later. In any event, though not a Romero film, going by the narrative and the final scene, the movie could well be viewed as a kind of "Evening of the Living Dead" preceding the original and seminal Night of the Living Dead [1968].)

Yes, the plot is thin, but Fulci does a lot with it and, truth be told, time has been extremely kind to Zombi II — possibly even more so than with Romero's original Dawn of the Dead, which suffers from inconsistent zombie activity (slow [most] vs. fast [the two children zombies]; thinking [zombie pretending to be a store manikin] vs. unthinking [zombie with gun]), crappy purple zombie make-up, and uneven pacing. (None of these flaws pop up in Zombi II, but others do.) Though obviously made with a lower budget than Dawn, Zombi II is far more enthusiastic in its openly exploitive embracement of gratuitous nudity (a wonderful diving scene with Auretta Gay and a disturbing shower scene with Olga Karlatos***), while the gore is just as excessive if much more cheap-looking. The zombies are also often much more frightening, particularly when, after digging themselves out of a grave, maggots and worms fall from their facial orifices.

Clearly, Zombi II is not a message film. It is a gore horror exploiter in which the story and acting are of less importance than the visceral and shock, and thus the characters are one-note and often — particularly in the case of Farrow's stiff Anne Bowles**** — poorly acted, and there are also glaring cases of sloppy filmmaking, like when the same scene of an exploding Molotov is re-shown after every Molotov thrown or when the zombie fighting the shark loses, has, and then again loses his arm (in a nevertheless amazing scene). Likewise, certain actions of the various characters defy logic, such as how Brian (Al Cliver) wrecks the car by swerving not to run over a zombie; how Susan Barrett (Auretta Gay), instead of hightailing, just stands there and stares when the Spanish zombie rises out of the earth; and how the good doctor, though knowing that you gotta shoot 'em in the head, never shares the info — or, for that matter, the group never figure it out themselves despite all the prior run-ins with zombies that only ended because they destroyed the head.

The explanation for the sudden reanimation of the zombies is also less than satisfying, an obvious expedient made simply to have some explanation for their presence. As one of the alternative titles (Voodoo) implies, Voodoo is bringing the dead back. But nowhere is it every truly explained why Voodoo worshippers — or, as the doc infers, some "evil witch doctor" — would even want to do so, particularly since the dead coming back are not controllable, mindless workers but virtually unstoppable eating machines that are, basically, leading to the total destruction of mankind. In this regard, the virus theory usually expounded in far more satisfying (and much less pro-Colonialist).

But for these and other flaws, Zombi II remains an intense and gripping horror movie. Fulci has a creative eye and tight style, and his occasionally creative camera work is never boring and almost always effective. From the first scene of the unmanned boat on the Hudson to the final scenes of (1) our final survivors alone on a boat with a zombified Brian banging against the cabin door and (2) zombies shuffling across the Brooklyn Bridge, Fulci keeps the pacing logical and the narrative coherent, interesting and — particularly once the group sets sail for the island — tense and suspenseful, if not harrowing. There is more to this film than just the gore and gratuitous nudity: there are a number of creepy if not horrific scenes as well as a depressingly sense of unavoidable doom — an unavoidable doom that is underscored by the movie's open and unpromising ending.

Yes, Zombi II is exploitation trash; but damn, for what it is, it is surprisingly effective — and far more coherent than most of Fulci's later "classics" like The Beyond (1981 / trailer), City of the Living Dead (1980) or House by the Cemetery (1981 / trailer). If you haven't seen Zombi II yet, give it a go: you probably won't regret it. We sure didn't. 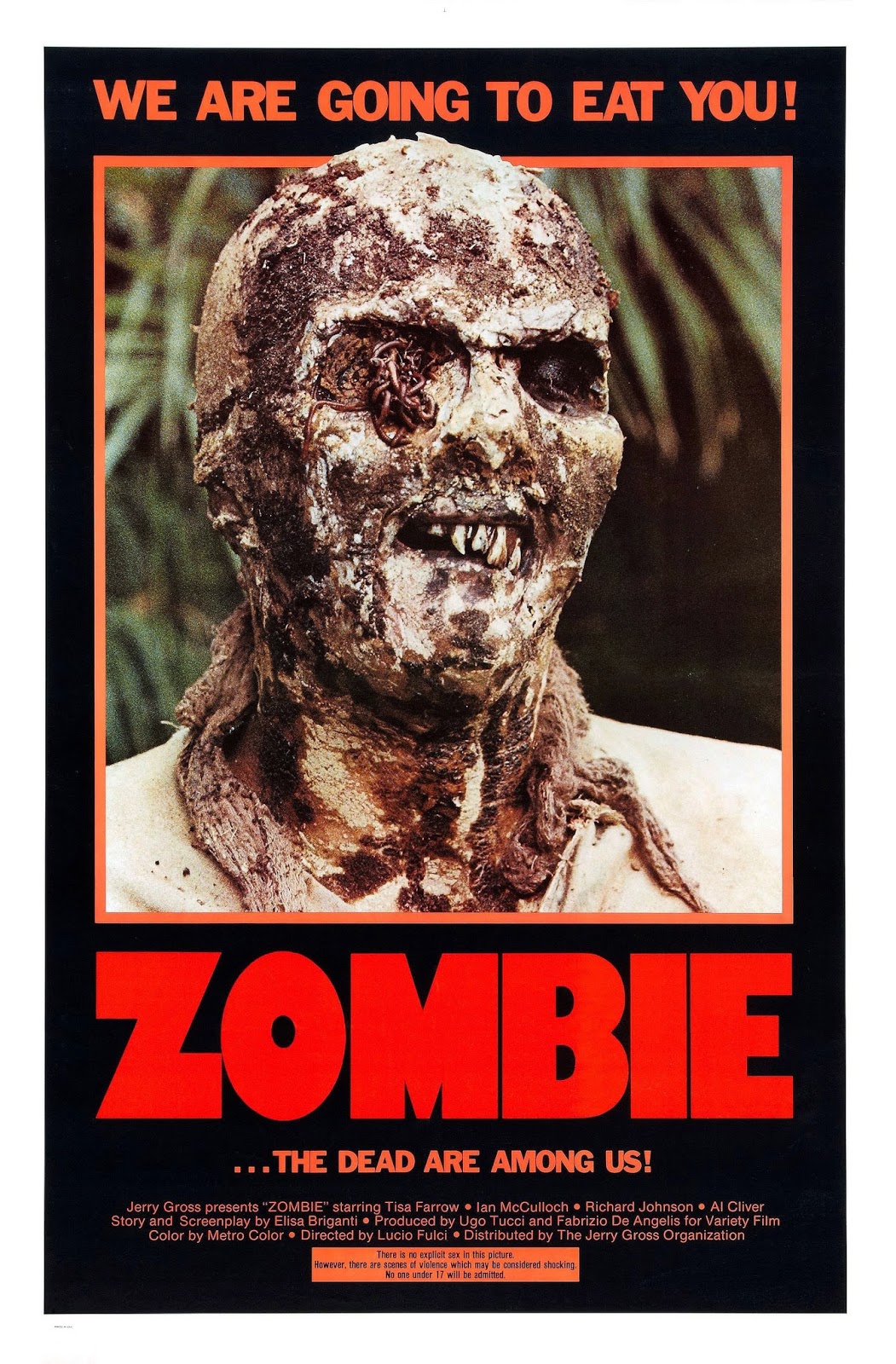 * Fulci bowed out midway and was replaced by the Italian Ed Wood Jr., Bruno Mattei, himself a recognized master of entertainingly shitty Italo zombie flicks (see: Island of the Living Dead [2006]).
** Both actually being old D'Amato productions the sleazemeister re-released as sequels so as to earn an extra buck; the first being Killing Birds (1987) and the second Absurd (1981 / trailer).
*** Both gratuitous interludes end with some of Zombi II's more infamous scenes: Gay's topless swim with the zombie versus shark scene, Karlatos's with the notorious and nerve-wracking wooden splinter in the eye scene. Also, as beautiful and fit as Karlatos is nude, the voyeuristic scene is both uncomfortable and disturbing, particularly once it is made clear — via a rotting hand that moves into the p.o.v. to scratch at the window — that the voyeur is a zombie out for vitals, not nubiles.
**** One did not lose a great actress when she decided to give up the limelight for nursing.

GIF above thanks to The Mojoverse.
Posted by Abraham at 11:19:00 AM