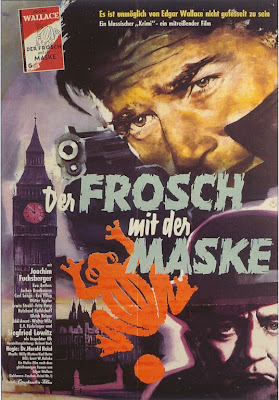 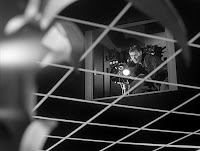 (Spoilers.) When it comes to the famed German Edgar Wallace film series, this is the one that started it all: the first post-WWII, German-language film of an Edgar Wallace story. It is also the third film version of Edgar Wallace's novel The Fellowship of the Frog, one of the author's most famous novels, and was preceded by two English-language versions, Archibald B Heath's lost silent serial The Mark of the Frog (1928) and Jack Raymond's The Frog (1937).

This adaptation here, Harold Reinl's version, is the first of three Wallace movies the Danish film company Rialto Film produced and released at the turn of that decade (the other two being Der rote Kreis aka The Red Circle [1960 / German trailer] and Die Bande des Schreckens aka The Terrible People [1960 / German trailer]). One year later, in 1960, Rialto Copenhagen hired Horst Wendlandt as the production manager of the firm's subsidiary in Frankfurt and following all sorts of typical business processes, liquidations and takeovers, Wendlandt was the boss of Rialto Film in Berlin by 1962.

Over the next 13 years, Rialto went on to make the rest of the legendary 33 Rialto Wallace films, a series augmented by an untold number of imitations and homages. And though Der Frosch mit der Maske — entitled Face of the Frog for its English-language release — is still entertaining after all these years, it is hard to believe that it was ever the powerful, influential force that it was. Like a decent bottle of wine stored much too long, age has not been kind to the movie; so even if you are able to appreciate the (important and influential) position that the film enjoys, you might not enjoy the film as a whole. (On the other hand, you can also see the stylistic beginning of all that which was still to come…)

Still, if you remember the time when the film came out, then suddenly its originality shines though: the dry humor, the camp villain, the graphic (for its day) sexuality and violence, the film noir influence in the photography and direction — though in regard to the last, director Reinl shows much better stylistic originality, creativity and control in his later Wallace films (such as Der Fälscher von London aka The Forger of London [1961 / trailer]) and homages (such as Die Weisse Spinne aka The White Spider [1963 / clip]). Here, in Der Frosch mit der Maske, the expressionistic touch is a bit more docile, the blocking a tad bit more staid, the editing a tad less dynamic. 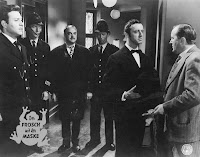 Though the film seems a bit long, slow and tame by contemporary standards, in its day it was rather racy and exciting, something rather different from the average product of the reserved Wirtschaftswunder years. Indeed, while there were German B-films prior to this one, Der Frosch mit der Maske must nonetheless be seen as the real kick-off of a (still unsung, under-appreciated and mostly ignored) Golden Age of B-Film in the German film industry, a decade populated by Wallace bad guys, Dr. Mabuse hi-jinks, Karl May westerns, Jerry Cotton shoot-outs, educational white coaters and clarifications films, wanna-be Bonds and Bondettes, Hong Kong slave trading, nasty horrors, violent but bloodless murders and untold other treasures of psychotronic celluloid… 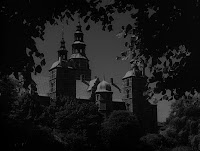 In Der Frosch mit der Maske, a master thief and his gang are terrorizing London, committing all sorts of daring robberies, never leaving a clue. Indeed, even the Frog's own henchmen do not know who he is, for his face is always hidden behind a truly ridiculous, bug-eyed frog mask. Inspector Elk (a dry Siegfried Lowitz, also to be found in three of the better Wallace films: the previously mentioned Der Fälscher von London, as well as Der Hexer aka The Mysterious Magician [1964 / German trailer] and Der Unheimliche Monch aka The Sinister Monk [1965 / German trailer]) has no clues and suspects everybody. Richard Gordon (a young Joachim Fuchsberger), the rich nephew of the chief of Scotland Yard, Sir Archibald (Ernst Fürbringer), decides to work on the case, his faithful butler James (an excellent Eddi Arent) always there at hand to help. Clues lead to the young Ella Bennet ("Eva Anthes", who retired from movies after her fourth film, the forgotten Krimi Endstation Rote Laterne [1960], to become an author and news broadcaster for one Germany's main public broadcasting stations under her real name Elfie von Kalckreuth), whose mysterious and unfriendly father John (Carl Lange, the evil doctor in the excellently campy Die Blaue Hand aka Creature with the Blue Hand [1967 / German trailer]) just might belong to the Frog's gang. 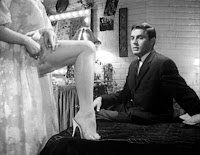 Ella's brother Ray Bennet (Walter Wilz, also found in Radley Metzger's softcore Carmen, Baby [1967 / trailer]) loses his job with the stingy Ezra Maitland (Fritz Rasp, of Metropolis [1927 / film] and Diary of a Lost Girl [1929 / first 15 minutes], to name but a few of his films) and takes on a job at the Lolita Bar, the secret centre of the Frog's activities. The sexy Lolita (Eva Pflug, better known as the frigid Tamara Jagellovsk from the classic German TV series Raumschiff Orion [1966 / English trailer]), doing exactly what the boss the Frog tells her, soon has the naïve young man wrapped around her fingers. To force Ella to join him for a randy ol' time, the Frog soon has Ray framed for murder,

but before Richard can supply the proof of the young man's innocence, both he and James are prisoners in a locked cellar....
Need we say that they escape? That Ray is saved, the Frog unmasked, and Richard and Ella get happily married? Probably not, but between all that more than a couple of red herrings die, Lolita bites the dust most savagely, there are a few big shootouts and at least two decent surprises: the real identity of the Frog and the revelation of the true career of Ella and Ray's father. 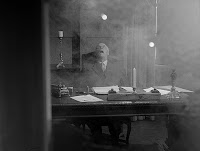 Der Frosch mit der Maske is not a masterpiece in any way, but it is fun enough and to an extent innovative for its time. And if some of the plot developments and action seems naïve or hilarious, the movie at least moves at a quick pace and doesn't leave you looking for the fast forward button. On the whole, Der Frosch mit der Maske features a little bit of everything — both the good aspects and the bad — that the later Rialto Wallace Films were to develop and "improve" upon. It may not be the best the series has to offer, but as a beginning it does damned fine. 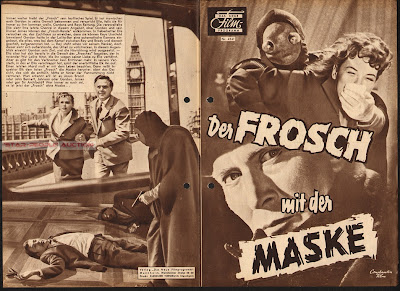