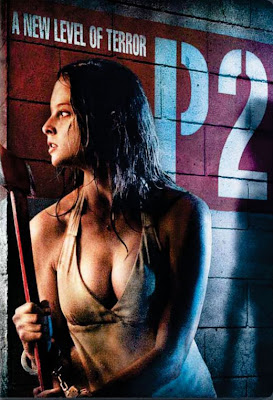 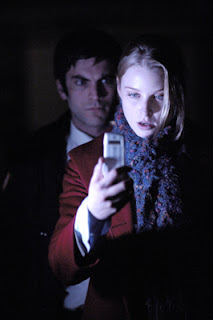 A woman empowerment film. Well, not really, but sorta. Directed by Franck Khalfoun, this film is based on a story written by Alexandre Aja and Grégory Levasseur, who also produced the film, two names familiar from the excellent 2006 remake of The Hills Have Eyes (trailer) and the nasty French gore thriller High Tension (2003 / trailer),* the latter in which Khalfoun also had a bit part. High Tension has little in common with P2 – other than, perhaps, a warped attitude to yearning desire – but The Hills Have Eyes does share one common thematic thread: the ability of the main character to grow beyond themselves, to be able to reach the point of jumping over their own shadow to overcome unexpected and inordinate odds and, well, if not to kick butt at least to survive. Much like the young father/widow does so over the course of the hellish day in The Hills Have Eyes, in P2, over the course of a painful and horrific Christmas night, the willowy blonde yuppie Angela slowly and painfully harnesses an inner strength that finally enables her to achieve freedom and – perhaps less lofty an aspiration but nevertheless highly satisfying – revenge. To paraphrase an old song by Aretha and Annie Lennox, the sister does it for herself.

"How could you kill a defenseless animal?!"
Thomas (Wes Bentley) 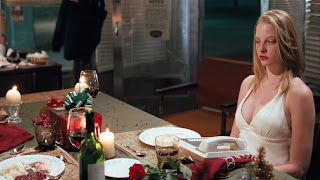 The film opens with a nicely seductive and oddly menacing track shot underscored with one of the least-threatening Christmas songs ever written, the original Eartha Kitt interpretation of Santa Baby, leading up to the popping out of a trunk lock and the terror-filled eye filling the hole. Roll back to the previous late evening, we see the businesswoman Angela Bridges (Rachel Nichols of The Woods [2006 / trailer], For Sale by Owner [2009 / trailer] and the new Conan the Barbarian [2011 / trailer]) desperately trying to finish up her day's project so as to join her family for Christmas; she never makes it. 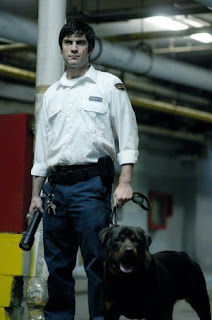 The last to leave the office building, on level P2 of the parking garage she is chloroformed and taken captive by the lonely, love-starved and decidedly psychopathic security guard Thomas (Wes Bentley of American Beauty [1999 / trailer], doomed to fun trash like Soul Survivors [2001 / trailer], Weirdsville [2007 / trailer], The Ungodly [2007 / trailer], The Tomb [2009 / trailer] and Dolan's Cadillac [2009 / trailer] due to a reportedly since-overcome dependency on drugs and alcohol). Angela is hardly pleased at waking up in a slinky white dress and chained to a chair, and her growing terror is no way appeased when Thomas presents and then obliterates his Christmas present for her: Jim Harper (Simon Reynolds of such masterpieces as Gate 2: The Trespassers [1990 / trailer], The Skulls II [2002 / trailer] and Saw IV [2007 / trailer]), a coworker of Angela's who some time previously had drunkenly attempted to molest her in an elevator.

The evening of terror proceeds, after Angela manages to escape, with a deadly game of cat and mouse in which Angela, unlike the heroine of most horror films, actually shows intelligence in all her desperate actions – it's just that no matter what she does, she seems only to dig her grave deeper. If Rachel Nichols makes for an atypically believable heroine, she is nonetheless upstaged by Wes Bentley who, it must be said, makes one damn-convincing psychopath, his clear blue eyes and empty face quickly and easily flip-flopping from rage to pleasantry at the blink of the eye. Between the two of them and the occasional side character that shows up only to die or leave, the viewer is offered an oft-uncomfortable and oft-scary ride that looks to be leading to an unavoidably depressing ending – but what do you know, there's more spunk in Angela than Thomas could ever imagine.

The bodycount of the film is surprising low, but for that the gore scenes pack a solid punch and the tension, once started, hardly lets up. And for being a film built around the terrorization of a lone lass, P2 is surprisingly non-misogynistic – your other half will probably find it an entertaining and well-made scary ride as well.
True, there are a few major convenient oversights to the tale, but they are required or the story wouldn't have the chance of going anywhere. Indeed, if the structure in which Angela and Thomas play hunter and the hunted had any of the fire alarms that such a building is required to have in real life, Angela might have still made it back to her family in time for the family Christmas celebration. Likewise, anyone who has ever worked as a night guard – I confess, I did so twice upon a time of great financial need in San Diego – will promptly recognize that a structure that large will not be guarded by only two guards. Not only that, but the film casually overlooks the fact of the local area supervisor, who usually shows up unannounced a few times a night to make sure that the guard(s) employed ain't sleeping on the job, drunk or sadistically terrorizing the local yuppie blonde.

P2: ignore the above-mentioned easily overlooked unrealities, and you have a solid, well-acted scare film that is far more believable and involving than the average slasher. Hard to believe it flopped so miserably during its extremely brief theatrical run – but then again, maybe it's not hard to believe: after all, it wasn't a remake, and the (only) final girl wasn't an airheaded bimbo.

Email ThisBlogThis!Share to TwitterShare to FacebookShare to Pinterest
Labels: http://www.blogger.com/img/blank.gif