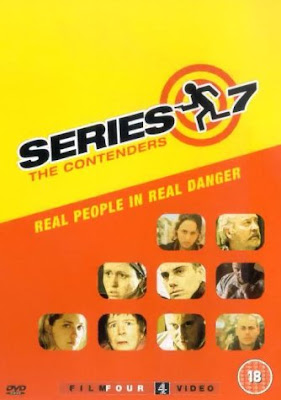 Opening Scene of Series 7: The Contenders:
"He is in intensive care following a self-inflicted knife wound to the back."
Narrator 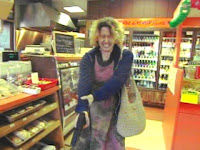 According to imdb, Daniel Minahan originally conceived Series 7: The Contenders as a weekly television show and even pitched it as one in 1998, a good two years prior to the debut of either Survivor or Big Brother. One assumes, however, that the series version would have been acted as well and not “real” reality TV.
Series 7: The Contenders is a satire of the modern true reality shows of America's Most Wanted, Cops and ilk, and as such it owes more to Jonathan Swift’s A Modest Proposal than, say, Peter Weir’s The Truman Show (1998 / trailer) or The Running Man (1987 / trailer). When watching The Truman Show and The Running Man, one always knows that the film is a film, whereas when reading Swift’s A Modest Proposal one feels that the proposal is serious no matter how far the writer takes it (which is one of the reasons it was so scandalous upon its original publication).

Series 7 has the same effect: in theory, you logically know that the film is just a fictional film, but Daniel Minahan, in his directorial debut, has such a sure hand of the visual vocabulary of true reality television that it becomes very easy to forget that one is not watching the real thing; it could actually be yet another reality television program, only this time around one in which the contestants kill each other. (Minahan’s excellent grasp of the language of television might also explain why he has since only directed episodes for television series, abet the cooler ones.)

The six contenders of Series 7 face off in "Everytown" USA, as represented by the fictional location Newbury (as in "Newberry"), Connecticut. The reigning champion is Dawn Lagarto (Brooke Smith, who played the kidnapped daughter of the senator in The Silence of the Lambs [1991 / trailer]), a single woman in an advanced state of pregnancy; if she wins, it is her last turn on the series and she is free to offer her child a good life with the reward money. Returning to her hometown of Newbury, she has to face off against Tony Reilly (Michael Kaycheck), an unemployed father of three and bad husband; Connie Trabucco (Marylouise Burke), a religious ER nurse that is practiced in euthanasia; Lindsay Berns (Merritt Wever), an 18-year-old self-confessed virgin with high SAT scores; Franklyn James (Richard Venture, who made his film debut in 1965 in Dark Intruder), a loner conspiracy theorist; and Jeffrey Norman (Glenn Fitzgerald, ex-Calvin Klein model), a terminally ill artist and ex-boyfriend of Dawn. The contestants are chosen randomly in a lottery (thus offering a shade of a modernized take on Shirley Jackson’s classic tale The Lottery), but later events in the film lend credence to the concept that the games are as controlled by unseen forces as the games in The Running Man.

We meet Dawn as she enters a convenience store to do her last kill of "Series 6", an event that leaves the customers around her relatively unfazed and which ends with her looking for some bean dip (she is, after all, a vegetarian). In Newbury, "Series 7" follows the various characters, interspersing the scenes of the hunt with personal stories and glimpses into their private lives. The dry humor that arises here is in the apparent realness and mundanity of their stories and personal tragedies. One by one the contenders drop, and not necessarily in the expected order, but complications arise when Dawn and Jeffery realize that they are still "soul mates"...

An odd side effect of being so realistic is that Series 7 also suffers from the occasional dry stretch, when characters or contestants about whom one cares little orate a bit too long about themselves and their situation; but this is to the advantage of the film, as these interludes, dryly realistic recreations of nobodies baring their soul and inner-secrets to the television masses during their 15 seconds of fame—fame has gotten more ephemeral since the heyday of Andy Warhol—intensify the realism of the (fake) program. At these points, the film takes well-aimed pot shots at the average person’s total lack of shame and their overriding desire to sacrifice all personal borders of privacy to the television-watching masses.

Initially, the acting seems oddly out of whack, but if it is so, it is only so because one starts out watching a "film" called Series 7. Once the jump is mentally made from the film to the TV show, the acting is suddenly totally in tune: the people aren't actors anymore, they are Joe and Jane Everyman in the spotlight of the camera. They aren't "acting" half as much as they obviously out-of-place and uncomfortable, eternally conscious of the fact that they are on camera.
As a satire, Series 7: The Contenders is realistically dead on target. It has, perhaps, lost some of the punch it must have had when first released 9 years ago, for in the interim reality TV—and public surveillance—has become too prevalent and normal to shock and bother people anymore. ("Big Brother is watching" has long since stopped being an evil concept in our world of today, much less nasty than, say, freedom of speech or separation of government and religion.) Nonetheless, the film is an interesting and effective satire and social comment, and far more entertaining than the embarrassing real thing.
Posted by Abraham at 2:02:00 PM

This is a really odd duck of a movie. My major issue with it was that the film feels so close to reality TV that it was difficult to get a handle on it as a satire. In other words, it was hard to find what the perspective on the medium was. Reality TV is ugly and excessive by nature. The logical jump to murder didn't seem like that much of a stretch. I could understand the jump in logic, but was confused about the message. Yeah, reality TV goes too far. But what does the filmmaker really think about it?