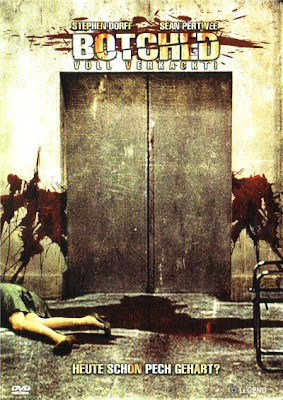 "I am, what psychiatrists call, alpha male."
Boris

he religious fanatic Sonya (Bronagh Gallagher of The Commitments [1991 / trailer] and Malice in Wonderland [2009 / trailer]), and the “alpha male” security guard Boris (Geoff Bell, a bit player seen in RocknRolla [2008 / trailer] and Solomon Kane [2009 / trailer]). The first attempt to negotiate with the supposed police ends with the beheading of the hostage Alex (Zak Maguire), and from then on their numbers dwindle as they face off with the crazed, blood-thirsty descendants of Ivan the Terrible, who just happen to be the owners of the building... 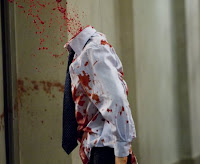 Why hasn't anybody heard of this movie? The deadpan debut film of director Kit Tryan, Botched was an audience favorite at the Fantasy Filmfest (in Berlin, Munich, et al) in 2007 and also wowed the crowds the same year at the New York City Horror Film Festival, where it pulled in the Best Actor (Brad Dorff) and Best Feature awards, and then it more or less simply fell off the face of the earth—and totally, thoroughly, completely, absolutely unjustly so.
Botched is a fun and entertaining ride, well acted and well shot, a perfect balance between blood-drenched violence and effective comedy. The laughs are instigated from verbal and visual gags that veer from dry humor to total slapstick, and despite being given virtually no time to establish any characterization virtually all the given actors master their stereotypes (and dialog) so well that even the least likable "good guy" manages to establish a level of audience sympathy, thus making most of them more than mere body-count fodder.

The budgetary limitations of the production do sometimes sneak in at the edges (the rat, for example, is funny but never achieves any level of verisimilitude), but Kit Tryan has a fine directorial eye and grasp of the camera: aside from the pleasantly edited opening tracking shot, Tryan continually offers some truly inspired framing and never slips up the visual continuity of the narrative. Never overly flashy, his directorial technique is informed and professional and does much to keep the wacky story under control.

In a 2008 interview at The Den of Geek about the film (which had been in development since 2003), Tryan talks about his intended goal of achieving a “unique flavor” in the manner of such classics of the 80s and early 90s as Tremors (1990 / trailer), The Evil Dead (1981 / trailer) or Brain Dead (1992 / trailer). Botched, for all its blood, never reaches the delirious gory heights of the latter two films, but it does achieve the difficult balance of humor and horror found in all three, as well as achieve an overall personal look and feel all of its own.

Regrettably, despite being the type of film that should be hit—it is, in truth, far more successful overall than the uneven but entertaining Hollywood horror comedy Zombieland (2009 / trailer)—Botched has seemingly simply disappeared into the limbos of direct-to-DVD lowest-shelf hell. A loss for fans of well-made and funny horror films with personality, to say the least—but rest assured, Botched is surely destined one day to become a rediscovered cult classic.

Go ahead, watch it: be different, be brave, be the first on your block to rediscover Botched!
Posted by Abraham at 6:45:00 PM