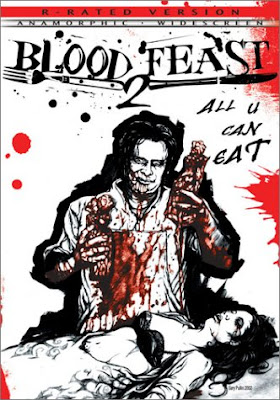 "I was dropping hints just as Navy men drop soap in the shower."
Trixi Treeter

92 min | 99 min (director's cut); cut scenes here.
Assuming you already know who H.G. Lewis is, then you can well skip the next three or four paragraphs. Otherwise, have a bit of history before the review.
More so than the names of the Englishmen Terrence Fisher, Christopher Lee and Peter Cushing, the genre of splatter, of unadulterated gore, owes its genesis to two people: the US Americans David F. Friedman and Herschell Gordon Lewis.

In most discussions on the topic, Friedman is generally overlooked in favor of H.G. Lewis, an act that owes its justification to the fact that during Friedman's long career in exploitation he chose to usually take back seat as the producer—and, on occasion, writer or background actor—and rarely took a director’s credit. Lewis, on the other hand, did everything: writer, voiceover and background filler, "special effects" and cinematography, producer and director. Likewise, unlike Friedman, Lewis not only often claimed that he came up with the idea of excessive blood while searching for a new gimmick, but also regularly continued to return to the genre of cheap gore long after he and Friedman went their separate ways after their tertiary joint blood-drenched film, Color Me Blood Red (1965 / trailer). Thus, as the pop film critic John McCarty wrote in his early treatise on the genre, the long out of print book Splatter Movies (FantaCo Enterprizes, Inc. 1981), H.G. Lewis "[…] holds a preeminent position as the man who brought the splatter movie into full being. He literally was the first."

H.G. Lewis originally joined forces with Friedman to make nudie-cutie films, but the slow death of the Hays Code began to make that type of product redundant. In need of a new angle to compete, he knew that "roughies" like his Scum of the Earth (1963 / trailer) weren't the answer; coming up with the concept of excessive gore, he introduced it to an unsuspecting public with Blood Feast in 1963 (trailer). The film was a hit, as was the follow-up splatter effort, the legendary 2000 Maniacs! (1964 / trailer). A year later, however, Friedman departed to go to Los Angeles (and partake in such exploitation and x-rated classics as—to name but a few—The Budding of Brie [1980 / opening sequence], Ilsa: She Wolf of the SS [1975], Trader Hornee [1970 / scene], She Freak [1967 / trailer], and The Defilers [1965 / trailer]) while Lewis remained in Florida, where his career had its ups and downs—mostly downs—until he finally left the exploitation film business in 1972 after The Gore Gore Girls (1972 / trailer) to go into advertising.

Lewis left behind a legacy of ineptly made but unforgettable trash classics and non-classics. Now easily available (see here, for example), for years they were the stuff of legends: seldom screened, they circulated mostly as crappy VHS bootlegs, gaining ever-increasing repute amongst fans of "Incredibly Strange Films". But who would have ever thought that one day, someday, H.G. Lewis would ever return to the genre to make yet another gore-laden filmic excess. But he did: thirty years after The Gore Gore Girls, and a full 39 years after he started it all with Blood Feast, H.G. Lewis returned with Blood Feast 2: All U Can East, a sequel to his first gore film.

Blood Feast 2: All U Can Eat is an oddity in that it is all H.G. Lewis even as it sometimes feels it isn't. That the film is a gore-laden excess in the tradition of his early films is without a doubt, right down to the occasional use of obvious but fresh offal. In this sense, the film segues smoothly into his oeuvre as yet another fine example of laughable gore trash. But Lewis’s best films of yesterday were funny, if not examples of fine camp, in spite of themselves and not on purpose: although he did intentionally fuse farcical humor into his ridiculous plots occasionally—a prime example would be the nipple-cutting scene in The Gore Gore Girls in which chocolate milk spurts from one mutilated mammary and white milk from the other—most of the humor was (seemingly) unintentional, based more upon the general inability of the cast and filmmaker than any premeditated thought.

Indeed, while Lewis has never had a pleasant word to say about the "acting ability" of the female lead of his first two gore films, the former Playboy playmate Connie Mason (shown to the left here), her inabilities simply match the ineptness of the direction and filmic technique of the films themselves—a technique that did not improve in the nine years of Lewis’s active career thereafter. And it is this very inability, this unbelievable cinematic unprofessionalism of Ed-Woodian proportion, that help lift Lewis’s best early films (gore or not) from the masses, that make them such a memorable experience (or, in the case of his lesser films like This Stuff’ll Kill Ya [1971 / trailer], a painful experience).
And here lies the big differences between Blood Feast 2: All U Can Eat and Lewis’s films of yesteryear. Blood Feast 2 may not feature any amazing directorial touches, but in comparison to any and all still-existing Lewis films, it seems downright professional.

And the acting, while often bad, is obviously bad on purpose: if Mal Arnold overacted as Fuad Ramses in the original Blood Feast simply because he was a bad actor, in Blood Feast 2 J.P. Delahoussaye as Fuad Ramses III overacts with obvious intention—as do most of the other characters. Likewise with the humor: if the laughs instigated by the first feast were mostly unintentional, those of the second feast are intentional attempts. Too intentional, in fact, as it often becomes annoying and is almost detrimental to the film—prime examples being the names of the female victims, the food obsession of Dt. Dave Loomis (John McConnell of Running Wild [1995 / trailer] and The Reaping [2007 / trailer]), the total brainlessness of Dt. Mike Meyers (Mark McLachlan of Crocodile [2000 / trailer]), the ladyfingers scene or that in which Dt Meyers drools his shirt full with blood, and the stupid body of the deceased Mr. Lampley (Chris Mauer), which turns up in every other scene and is noticed by nobody. (With so many obvious jokes, it seems odd that he didn’t work one in about artificial additives during the scene in which the silicone-pumped naked lady gets a corkscrew in her head.)

On the other hand, while it might have been a pleasant surprise had Blood Feats 2 proven to be just another apple off the same tree, such "improvements"—or differences—from his earlier film can be overlooked (if sometimes with gritted teeth). At least Lewis uses the same cheesy, cheap sets as before and a comparably idiotic story—indeed, it is virtually the same story. Likewise, not only did he obviously buy out a slaughter house for his films, the prop dummies and bodies are a substantial improvement from the obvious showroom dummies of his early films. In the end, despite whatever differences the film has from vintage Lewis, Blood Feast 2 is still pure, unmitigated trash, existing for no reason other than to bathe in excessive gore and play for cheap laughs. And if you like films like that, you’ll probably like Blood Feast 2 as well.

The plot, as already mentioned, is simply that of the original Blood Feast, but 30 years later and with a new cast of characters: Fuad Ramses III (J.P. Delahoussaye) comes to town after inheriting the storefront of the original Fuad. In no short order he is not only a slave of Ishtar, but has been hired to cater the marriage of Tiffani Lampley (Toni Wynne of Piggy Banks [2005 / trailer]) by her bitchy mom Mrs. Lampley (Melissa Morgen). One by one he works his way through the bridesmaids as he puts together the blood feast needed to bring his goddess back to life.

Give it a try—but only the unrated version, The R-rated version lacks a full seven minutes of tits and gore, and it is the tits and gore that make the film. Blood Feast 2: All U Can Eat ain’t Shakespeare—hell, it ain’t even Amanda McKittrick Ros—but it does go relatively well with a six-pack and even better with some good sensimilla.
Posted by Abraham at 2:25:00 PM