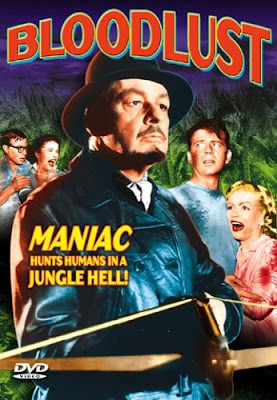 "Listen, Mister Balleau, fun's fun. But if you think we're gonna be the clay pigeons in your shooting gallery—you're just a little far out!"

Bloodlust! is the directorial debut of one Ralph Brooke, a non-entity agitating on the fringes of z-productions whose brief (documented) foray into film ended with his death two years later in 1963 after writing the script to the sleazy noir The Right Hand of the Devil (1963), a film described by the website Noir of the Week as rising "above its budget restrictions to reach a respectable level of artistic achievement—snugly fitting within the lineup of other harsh 60's noirs (Brainstorm [1965] and Point Blank [1967 / trailer] among them). As in those films, the atmosphere in Right Hand is thick with illicit sex, psychosis, and hair-trigger violence." (Ralph Brooke the director/writer, by the way, should not be confused with Ralph Brooke the actor; the latter, who died on 23 March 1992, is the man that supplied the famous Wilhelm Scream in The Charge at Feather River [1953].) 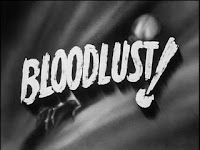 For Bloodlust!, which he also scripted, Ralph Brooke liberally mined one of the old faithful plotlines of genre trash: Richard Connell's famous story The Most Dangerous Game, which was first filmed in 1932 (click here for the full film) with Fay Ray, Joel McCrea and Leslie Banks as the killer count and has been (officially and unofficially) remade ad-nauseam times since. (Selected versions include: Run for the Sun [1956], The Woman Hunt [1973], Turkey Shoot [1982 / trailer], Slave Girls from Beyond Infinity [1987 / trailer], Deadly Prey [1987 / trailer], Hard Target [1993 / trailer], Surviving the Game [1994 / trailer], The Pest [1997 / trailer].) 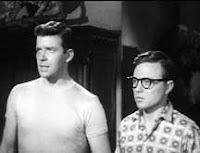 In this version, two teenage couples—Johnny (Robert Reed) and Betty Scott (June Kenney) and Pete (Eugene Persson) and Jeanne (Joan Lora)—on a boat cruise decide to go ashore an uncharted, nearby island for clam bake when their skipper Tony (Troy Patterson) drinks too much and passes out. Onshore they wander around like idiots before being taken in by Dr. Albert Balleau (Wilton Graff, a poverty row and TV character actor whose career highpoint was playing one of the fathers in the film version of Compulsion [1959 / trailer]). Back at Balleau's mansion, the kids get introduced to his wife Sandra (Lilyan Chauvin of Pumpkinhead II: Blood Wings [1994 / trailer], Predator 2 [1990 / trailer], Silent Night, Deadly Night [1984 / trailer], The Mephisto Waltz [1971 / trailer] and Lost, Lonely and Vicious [1958 / trailer]) and his drunken guest Dean (Ralf Brooke's brother Walter Brooke, of The Conquest of Space [1955 / trailer], the TV series The Green Hornet [26 episodes, 1966-1967], The Graduate [1967 / trailer] and The Return of Count Yorga [1971 / trailer]), who soon reveal to the kids that the good doctor is a psychotic killer. (Something Pete and Jeanne already know from their exploration of the mansion’s basement caverns.) I 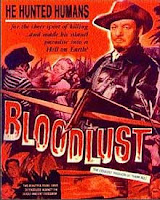 n love and desperate, Dean and Sandra make an attempt to escape but end up as part of the doctor’s collection of stuffed trophies. Dr Balleau, who then reveals himself to be a windbag psychotic, soon discloses his plans to hunt the alcoholic skipper and the two youths next. During the hunt, Dr Balleau kills the skipper and some crazy dude (Bill Coontz) before letting his brutish henchman Jonder (Bobby Hall of High School Big Shot [1959 / trailer], Hell's Angels '69 [1969 / trailer] and Night Call Nurses [1972]) sink to death in some leach-infested quicksand—but he fails to nail either the two teens or their girlfriends, who have snuck out of the safety of the house to join them. The four decide that the safest place would be back at the house, where they might find weapons. Later, the good doctor, having called it a day, returns and traps them in his trophy room. As he forces them at gunpoint to test out the various positions he might have them stuffed in, he suddenly finds out that he left the side of the quicksand pit much too early...

The cast keeps a straight face throughout the film, even if their presence and skills vary. As Johnny Randall, the manly man of the two youths, future Brady Bunch daddy Robert Reed (seen in the image here as Daddy Brady) towers over the rest of the cast but looks oddly like an over-stuffed sausage in his skintight shirt and tight pants, his love-handles and gut bulging over his much too tight belt. As big as he is, he is easily upstaged by most of his co-stars, even those that never went on to do any other film. (His three teenage costars, that is: the diminutive June Kenney, who had previously had feature roles in such exploiters as the depressing Teenage Doll (1957 / trailer), Earth vs. the Spider (1958 / trailer), and Attack of the Puppet People (1958 / trailer) never did another feature-length film after Bloodlust, nor did Joan Lora or Eugene Persson.) The film is greatly serviced by the cinematography of Richard E. Cunha (the director of Dog Eat Dog [1964 / trailer], Frankenstein's Daughter [1958 / full film], Missile to the Moon [1958 / colorized trailer, sorta], Giant from the Unknown [1958 / trailer] and She Demons [1958 / trailer]), which is nicely moody during many of the cave and jungle scenes. The generic music comes from Michael Terr, a man of little note other than that he started his career working on the music for the tragic but camp classic Hilton Sisters exploitation vehicle Chained for Life (1951 / full film) and ended it with Wilbur and the Baby Factory (1970 / trailer).

All trivia aside, Bloodlust! is an interesting, at times even effective z-budget film that is, in general, given many more raspberries than it actually deserves. Hidden between all its cheese and poverty-row ineptitude is a surprisingly effective and at times even shocking thriller that could even be labeled an early attempt at B&W gore filmmaking—indeed, the flick has a lot more tasteless viscera than Hammer’s indefinitely far more artistically successful and tasteful “early gore” color masterpieces, The Curse of Frankenstein (1957 / trailer) or The Horror of Dracula (1958 / trailer). The real problem of Bloodlust! is that for all its bare-boned shocks and atmosphere, it is an oddly uneven film: the only reason the first half hour isn’t tedious is because it is so laughable, and even once the film finally moves into its horror segment, the soundstage-heavy and full-frontal filmmaking deadens a lot of the limited amount of tension the film has. 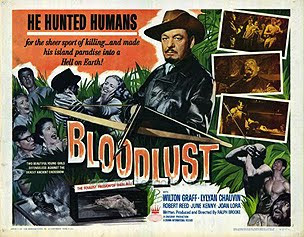 (The cinematography is noticeably better in the cave and, on occasion, the jungle scenes.) Nonetheless, Bloodlust! has more than one jaw-dropping moment, and not all of them are due to unintentional humor or inane dialog. The dead babe floating in the tank (played by the director's wife, Brianne Murphy, who between directing the grindhouse non-classic Blood Sabbath [1972, with Dyanne Thorne] and the snooze-a-thon To Die, to Sleep (1994) became the first female director of photography on a major studio, union picture, the Anne Bancroft directed seriously un-funny fiasco Fatso [1980 / trailer]), the pieces of a skinned human pulled from the preparation tank, the living man in the acid bath and the blood visibly pulsating from an impaled man are all highlights of early grindhouse offal, and more than once the story swerves briefly into unadulterated verbal sleaze (like when Dr. Balleau starts waxing on how the two girls will replace his departed wife and how he is looking forward to getting to know them better).

For z-grade B&W horror, Bloodlust! is a surprisingly entertaining watch and is an easy way to waste both 68 minutes or introduce your young child to the pleasures of horror films. More than one scene is sure to scare the gee-bees out of the kids, if not get your wife pissed at you for letting them watch such warped trash. Bloodlust! is not only in public domain in the US, but is available at the Internet Archives. Going by the shared skips and rips, the print there is the same as the one used for the PC Treasures Double Feature DVDs. The film is embedded below for your viewing pleasure—or go here.