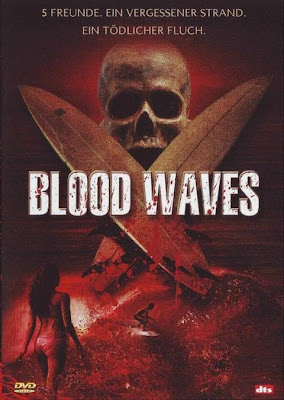 "I will suck on your fuckin' cock all the way back to L.A., if we just leave now! Please!"
Rose (Joleigh Pulsonetti)

Like so many cheapies, this 2006 flick has pretty much slipped under the radar and been relegated to total obscurity. It is, perhaps, a touch too under-developed to deserve any fame and adulation (although it does have some nicely sly humor at the expense of weltfremd US Americans), but considering the sheer amount of unadulterated crap that is out there it can at least be said that fans of low budget horror can do far, far worse than Blood Waves. The flick is a bit low on the blood and gore and too high on the shaky camera and quick edit, but it does fly by quickly and, even better, director Ian McCrudden does a rare thing in that he actually manages to give the sun-baked surfers of his horror film enough personality that they become something more than mere bodycount. They might be brainless surfers, but there is more to their horror-film generic personalities (hero, girlfriend, best dude friend, slut and geek) than just their surfboard. The result: one not only sort of hopes that they'll get away but even feels slight regret for those that don't.

The title itself, Blood Waves, is totally off the mark, however; far less appropriate for the film than its original name of Trespassers. The waves never get bloody, and it is rather the beach itself than hides the danger, a danger that (illogically enough) seemingly never extends beyond the narrow confines of the shore with dream-sized waves to attack the nearby locals. But then, despite the film's initial appearance of slight wallowing in US xenophobia (similar but not even half as obnoxious as in the Hostel [2005 / trailer] and Hostel: Part II [2007 / trailer] films, the most xenophobic US film franchise of the past decade), the evil of Blood Waves is actually born of Americans and aimed at those that come to take and use—Trespassers, in other words. And as the film makes abundantly clear, there are enough out there, so it is perhaps somewhat understandable then that the evil never attacks or spreads to the locals nearby.

As the tagline explains, Blood Waves tells the tale of "5 friends. An exotic journey. A deadly curse." (OK, Baja California really isn’t all that exotic, but it isn't the US—which means it’s pretty damn exotic for most US Americans.) After drifting around the world in search of the perfect wave, the surfer Tyler (Brendan McIver Fleming) finds one the best beaches—the in real-life ecologically endangered Punta Abreojos of Baja, Mexico—relatively close to home. He calls up his brother Colin (Kaiwi "I’m an actor who surfs not a surfer who acts" Lyman, an actor well on his way to Z-movie fame with such masterpieces as Frankenstein vs. the Creature from Blood Cove [2005 / trailer], Robinson Crusoe: The Great Blitzkrieg [2008 / trailer], and Blue Movies [2009 / trailer]) in LA to join him in the party. Coming down with four friends — the good girl Ashley (Michelle Borth of Easy Rider: The Ride Back [2009 / trailer] and Komodo vs. Cobra [2005 / trailer]), the slut Rose (Joleigh Pulsonetti of Hatchet [2006 / trailer]), the geek loser Lucky (Alex Feldman of The Final Patient [2005 / trailer], Repo Chick [2009 / trailer] and The Collector [2009 / trailer]) and the buddy Javier (Jon Ada)—the five find wicked waves and the cars and bikes of Tyler and his buds, but no party or people.

After a day of frolic and fun, the five are faced with the curse of El Gringo (Clayton Rohner of Nightwish [1989], I, Madman [1989 / trailer] and The Relic [1997 / trailer]), a former cult leader gone demon that converts trespassing users and takers into crazed cannibals or cannibal food. (Perhaps one could call them cannibal zombies, as they are living zombies in the sense of 28 Days Later [2002 / trailer] or the remake of The Crazies [2010 / trailer] and not dead ones as in Night of the Living Dead [1968 / trailer] or Dawn of the Dead [1978 / trailer or 2004 / trailer], but they like to eat what they kill.) Can the five fun-loving folks save themselves? What do you think?

The initial leisurely pace of Blood Waves serves to assist in identifying with the victims—even if not all of them are all that likable—and also serves to underscore the fact that they are the foreigners. It does seem odd that while El Gringo goes after the first of the five during the day, hell doesn't actually break loose until night—which is filmed as night really is, meaning that much of the action and gore once the cannibals start attacking is lost in murkiness. A rarity in contemporary grindhouse pops up twice in Blood Waves: both babes toss out a topless scene, one under the bright sun and the other in the gloom when the last couple on the run decide upon some desperate sex in the face of imminent death—but whereas the babes brave to bare, the men do not, though Lucky comes close to it during his wanking scene. The final shot of the film can be seen as either an invitation to a sequel or as saying that not only is life circular but the world is full of inconsiderate users and takers…

Hardly a masterpiece at any level, Blood Waves nonetheless has enough individuality and effectiveness as a horror film despite its mundane and generic plot to supply 1.5 hours worth of low grade entertainment. It is a shame that the film seems to be more of an anomaly in director Ian McCrudden's filmic oeuvre, for it does manage to indicate a possibly promising career in genre films.
Posted by Abraham at 8:03:00 PM